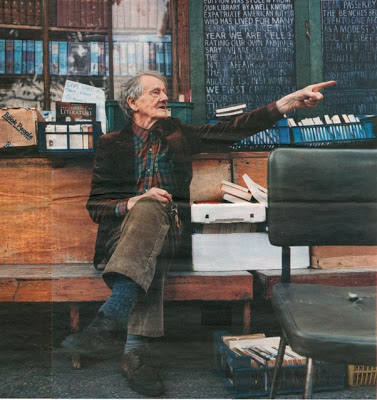 Eyeing me suspiciously, George asked if I was a writer. I said I’d been a college editor, and had aspirations. He said OK… I could have a week on the mattress.

Never doubt that simple acts of generosity and solidarity can change lives — and the world.

George Whitman and his Shakespeare & Company bookstore have been uniquely powerful living proof of that. And his daughter has guaranteed it will continue.

Nestled into the Left Bank of the Seine, a stoned throw from the magnificent Notre Dame Cathedral, George’s bookstore has been a beacon of Bohemian/hippie/humanist/leftist writing and romance for decades.

Its spiritual roots stretch back to the great literary lights of the ex-pat 1920s- — Hemingway and Fitzgerald, Joyce and Stein. In George’s 1950s era, that also meant Kerouac, Ginsberg, Corso, and more. So much genius passed through the place its walls seem to glow.

George Whitman was known for letting budding young writers crash for weeks at a time. In the summer of 1967, I was one of them. Based on hippie urban legend, I sought the place out and asked if I could sleep on a couch upstairs.

Eyeing me suspiciously, George asked if I was a writer. I said I’d been a college editor, and had aspirations.

He said OK… I could have a week on the mattress.

It was pure joy. Raised in the Midwest, just out of the University of Michigan, at the age of 21, I got to hang out in Paris, surrounded by the spirits of the century’s greatest writers, thinkers, rebels. Nightly sessions of intellectual fervor followed days of wandering free through the vibrating streets of that gorgeous, dazzling city.

George consciously followed in the footsteps of another Whitman (no relation) who transformed the literary world of his day — and far beyond. Generous, eclectic, and eccentric, George shared Walt’s occasionally fierce New England temperament, making him both fascinating and formidable.

My week in his bookstore changed my life. It proved that the fantasy of a Bohemian counterculture could actually be sustained, and that it was at least as good as billed by those perennial romantics who are always being dismissed as “unrealistic dreamers.” At Shakespeare & Company, the dream was real… and as good as it gets. All these years later, Woody Allen’s Midnight in Paris delightfully captures (though without the politics) the joy of its spirit.

And it continues. Not long ago I brought to Paris my teenaged daughter Julie. With Max Schneider, son of the great green energy expert Mycle, we paid our respects to Notre Dame, then found the bookstore.

I’d stopped by in the early 1990s and found the place in serious disrepair. I wasn’t optimistic about this return visit.

Shakespeare & Company. Image from Book’s End.
But to my great joy, the place literally shone. George’s daughter Sylvia runs it with firmness and grace. It is bustling with business, beautifully appointed, and offers a timeless blend of off-beat rebellion and good bookselling — what George has called “the business of life.” It is a solid independent enterprise of the kind that is tragically disappearing throughout the US — but in this case with a legendary past being carefully preserved and enhanced.

With Julie and Max by my side, I told Sylvia that I’d stayed upstairs more than 40 years ago, and wanted to thank her for her father’s life-changing hospitality.

She suggested I thank George myself.

Venturing up the narrow, tiled staircase I’d loved so long ago, we found a young writer from Florida encamped as I’d been when we marched through the wine-soaked streets, shouting epithets against the Vietnam War, then retreating to the bookstore to drink and smoke and bask together in the intoxicating, self-proclaimed brilliance of our youthful rebellion.

George was napping on the third floor, but I could send up a note.

So I wrote one profusely thanking him for putting me up, and for keeping the faith through all these decades of trial and chaos, tears and joy, disappointment and victory.

Having made sure that Max and Julie were sufficiently inspired, we were just making our way out when a note came back, scribbled on the backside of the one I’d sent up.

George apologized for being indisposed. But he was glad I’d enjoyed my stay. And, since I’d continued to write all these years, I was welcome to stay again — any time.

Wow! I cannot describe the feeling that note gave me. Especially as I looked at the wide-eyed responses of my daughter and our young friend. In an instant, their lives changed, as mine had so long ago.

George Whitman passed away this week, at age 98. But his is a life that will truly never stop giving.

So thank you, George, for enhancing the Dream and making it real. Thank you, Sylvia, for keeping it alive.

And thank you, Shakespeare & Company, for reminding us all that there really is at our core a spirit of generous, joyous grace that makes life worth living, and that need never die.

[Harvey Wasserman’s History of the United States was published five years after his stay at Shakespeare & Company. He’s been writing and living that dream ever since. Read more of Harvey Wasserman’s writing on The Rag Blog.]