Harvey Wasserman : We May Yet Lose Tokyo 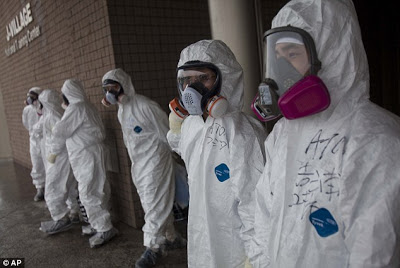 Cleanup at Fukushima. U.S. experts said they were not getting accurate details of the scope of the Fukushima disaster after reactors melted down last year. Photo from AP / Daily Mail.
(Not to mention Alaska and Georgia)
We may yet lose Tokyo

With bitter debate raging over the killing power of Fukushima’s emissions, the certification of a new U.S. reactor design may someday be remembered as a bizarre epitaph for the 20th century’s most expensive failed technology.

As the Nuclear Regulatory Commission approves a construction/operating license for two new reactors in Georgia, alarming reports from Japan indicate the Fukushima catastrophe is far from over.

Thousands of tons of intensely radioactive spent fuel are still in serious jeopardy. Radioactive trash and water are spewing into the environment. And nuclear engineer Arnie Gundersen reports that during the string of disasters following March 11, 2011’s earthquake and tsunami, Fukushima 1’s containment cap may actually have lifted off its base, releasing dangerously radioactive gasses and opening a gap for an ensuing hydrogen explosion.

There are some two dozen of these Mark I-style containments currently in place in the U.S.

Newly released secret email from the NRC also shows its commissioners were in the dark about much of what was happening during the early hours of the Fukushima disaster. They worried that Tokyo might have to be evacuated, and that airborne radiation spewing across the Pacific could seriously contaminate Alaska.

Reactor pushers have welcomed the NRC’s approval of the new Westinghouse AP-1000 design for Georgia’s Vogtle. Two reactors operate there now, and the two newly approved ones are being funded with $8.3 billion in federally guaranteed loans and state-based rate hikes levied in advance of the reactors’ being completed.

NRC Chair Gregory Jazcko made the sole no vote on the Vogtle license, warning that the proposed time frame would not allow lessons from Fukushima to be incorporated into the reactors’ design.

The four Commissioners voting to approve have attacked Jaszco in front of Congress for his “management style,” but this vote indicates the problem is certainly more rooted in attitudes toward reactor safety.

The approval is the first for a new construction project since 1978. The debate leading up to it stretched out for years. Among other things, the Commission raised questions about whether the AP1000 can withstand earthquakes and other natural disasters. Even now the final plans are not entirely complete.

Only two other U.S. reactors — in neighboring South Carolina- — are even in the pre-construction phase. As in Georgia, South Carolina consumers are being forced to pay for the reactors as they are being built. Should they not be completed, or suffer disaster once they are, the state’s ratepayers will be on the hook.

The industry is heralding the Vogtle approval as a major boon to the “Nuclear Renaissance.” But it comes alongside the announcement that all 17 reactors owned by the Tokyo Electric Company are shut, as are all but two of Japan’s 50-plus nukes.

Germany has decided to shut all its nukes by 2022. New reactor financing in Great Britain is under legal attack, as it is in Florida. India has announced that in 2011 it led the world in new green energy projects. China has yet to make its future nuclear commitments clear in the wake of the Fukushima disaster. And no American utility is readily available to follow in Vogtle’s path, with operating reactors in Vermont and New York’s Indian Point under fierce governmental attack.

Florida’s Crystal River is beset by huge bills for faulty repair work, and may be headed for permanent shutdown. Both currently licensed reactors at California’s San Onofre are closed following radioactive leaks, and a disturbing pattern of tube holes in newly installed steam generators has surfaced at a number of reactors across the U.S. 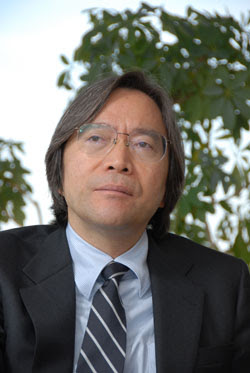 Warning that Fukushima is “far from over,” Tasaka said official assurances of the complex’s alleged safety were based on “groundless optimism.” Tasaka cited more than 1,500 fuel rods dangerously exposed to the open atmosphere at Unit Four alone. The waste problem has gone nationwide, he said in a newly published book, as “the storage capacities of the spent fuel pools at the nation’s nuclear power plants are reaching their limits,”

Tasaka’s statements came as a new temperature spike unexpectedly struck Fukushina Unit Two. For reasons not yet clear, heat releases in excess of 158 degrees Fahrenheit spewed from the core, prompting Tokyo Electric to pump in more water and boric acid meant to damp down an apparently on-going chain reaction. Prof. Tasaka and others warn that this in turn will contribute to spreading still more radiation into the water table and oceans.

With bitter debate raging in Japan, the US., and elsewhere over the killing power of Fukushima’s emissions, the certification of a new U.S. reactor design may someday be remembered as a bizarre epitaph for the 20th century’s most expensive failed technology.

Without state ratepayers and federal taxpayers being forced to foot the bill, new reactor construction in the U.S. is going nowhere.

And without a final resolution to the ongoing horrors at Fukushima, the entire planet, from Tokyo to Alaska to Georgia and beyond, remains at serious radioactive risk.

[Harvey Wasserman edits www.nukefree.org. His Solartopia! Our Green-Powered Earth is at www.solartopia.org. The Solartopia Green Power and Wellness Show airs at www.progressiveradionetwork.com. Read more of Harvey Wasserman’s writing on The Rag Blog.]