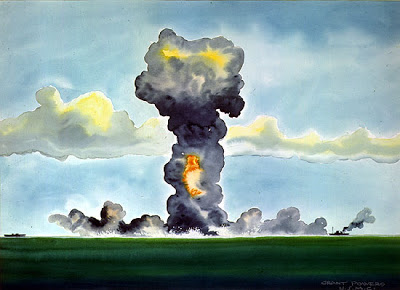 The Climate Bill is due on Earth Day.

By all accounts it will be a nuclear bomb.

It will be the ultimate challenge of the global grassroots green movement to transform it into something that can actually save the planet.

For the atomic power industry, the bill will cap a decade-long $640-million-plus virtual cleansing of its radioactive image.

Ditto new offshore drilling and “clean coal.” The markers have been laid for a greenwashed business-as-usual approach toward pretending to deal with global climate change and the life-threatening pollution in which our corporate power structure is drowning us. All without actually threatening certain corporate profits.

From “An Inconvenient Truth” to Obama’s impending Earth Day address, the official emphasis is on each of us, as individuals. To be sure, we ALL must consume smarter, use less and recycle more. Since the first Earth Day, all these great green ideas have had an undeniable impact.

Some corporations have also learned that pollution is by definition a form of waste, and that to actually go green is to become more profitable.

But some technologies and fuel sources have proved simply unworkable on a survivable planet. Topping the list is atomic power.

Once sold as “too cheap to meter,” atomic reactors are too expensive to matter — except for massive taxpayer subsidies.

The first commercial reactor opened at Shippingport, Pennsylvania, in 1957. Since then, the industry has failed to solve its radioactive waste problem, failed to find meaningful private liability insurance, and failed to find unsubsidized private financing for new reactors.

The handouts in the Climate Bill are sorry testimony to all that. But there’s more.

All reactors are indefensible targets for terror and error. As at Fermi, Chernobyl, and Three Mile Island, the potential for disaster is apocalyptic.

All reactors kill nearby living things — human and otherwise — from “normal” radiation releases.

Reactors in France, Alabama, and elsewhere which have been forced shut because they super-heat rivers and lakes — all in the name of “fighting global warming.”

Selling the falsehoods that atomic energy is “carbon free,” successful in France and can “fight climate change” has been dirty and expensive.

Along the way, the industry has hired a bevy of flacks with marginal green credentials.

But on Earth Day we’ll see its crowning achievement.

Already the Administration has pledged $8.33 billion in loan guarantees to fund a double-reactor project in Georgia. The designs have not yet been certified, the price tag is soaring, there’s bitter debate over where the cash will come from and what fees should be attached, and the state’s ratepayers are on the hook even if the plant never generates electricity.

But the Administration wants more than $50 billion in loan guarantees to repeat the process elsewhere. Kerry-Lieberman-Graham have toyed with even bigger subsidies, in various forms, ranging to $100 billion and more.

It’s not clear what the Earth gets in exchange. Cap and trade, once the centerpiece of the whole deal, is gone. A carbon tax does not seem to be on the table. There will certainly be subsidies for various Solartopian technologies, and a headline-grabbing “surprise” or two.

But exactly what the barons of fossil/nuke will offer to justify their massive cash infusions is not yet clear.

All that’s certain is that this Earth Day, the Climate Bill will jack the debate to a whole new level.

Given soaring global carbon levels and a wasteful, obsolete economic infrastructure in serious decline, we are clearly at the precipice.

The Administration, the Congress and the country will have to decide: will we continue to subsidize failed atomic technologies and catastrophic fossil mining and drilling whose corporate backers have apparently unlimited funds for lobbying and PR?

Or do we finally turn to the truly green technologies and ways of living that can save both our planet and our economy?

The final battle starts Thursday. The outcome is up to us.

[Harvey Wasserman’s Solartopia! Our Green-Powered Earth is at www.harveywasserman.com, along with The Last Energy War. He is senior advisor to Greenpeace USA and senior editor of www.freepress.com, where this article also appears.]