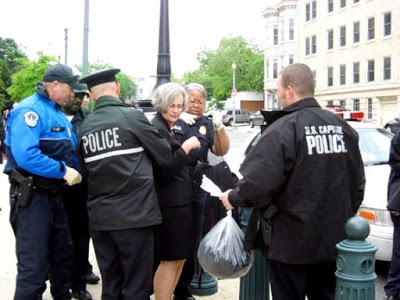 Psychiatrist Dr. Carol Paris is arrested for disorderly conduct outside of a U.S. Senate office building Tuesday, May 5, for speaking out at Sen. Max Baucus’ Congressional hearings on health care reform. Photo from South Maryland News.

Dr. Carol A. Paris [a psychiatrist], spent Tuesday in jail — all in the name of health care reform.

“I interrupt this so-called public hearing to bring you the following unpaid, political announcement: Put single-payer on the table. My name is Dr. Carol Paris, and I approve this message,” Paris said as she was taken out of a congressional public hearing by police for disorderly conduct, as several other protesters with Paris who are part of Physicians for a National Health Program also shouted similar messages.

‘I have seen many blatant excesses of power and suppression of free speech in our “land of the free,” but never have I seen anything like the excesses that Sen. Max Baucus has exhibited in his hearings on health care in the Senate of The United States.’

It was in 1895 that Emil Zola challenged the openness and truthfulness of The Third Republic. It would appear that it is time for a voice to be raised against the corporatocracy that now rules our Republic and permeates every level of our government institutions.

In the near 88 years that I have been a citizen of this nation I have seen many blatant excesses of power and suppression of free speech in our “land of the free,” but never have I seen anything like the excesses that Sen. Max Baucus has exhibited in his hearings on health care in the Senate of The United States. These farcical hearings are but a theatrical performance to satisfy the uninformed public.

Thus, I would accuse Senator Baucus of being a willing tool of his corporate masters, those who make such excessive contributions to his campaigns — the insurance (HMO), pharmaceutical, and medical equipment industries. I would further aver that — in conducting these hearings in such a fashion — he is doing exactly what his donors expect of him, with no consideration of his duty to, or the rights of, the citizens of the United States. It should be pointed out that only Sen. John McCain receives similar amounts of money, openly, from these sources.

Approximately 70% of the public desires single payer, universal health care, or as an interim solution, President Obama plan of “Medicare for all.” This is echoed by polls of physicians with near 60% approval. Yet, Senator Baucus convenes Senate hearings excluding the various advocates of universal, or publicly insured, health care as proposed by Physicians For A National Health Care Program, Healthcare Now, Single Payer Action, Doctors For America, and with endorsements from hundreds of labor, civic, and religious organizations — and includes only his corporate handlers in the discussion: the health insurance industry, Blue Cross/Blue Shield, AARP, the national Chamber of Commerce, the American Enterprise Institute.

Not only does Senator Baucus deny representation to the single payer advocates, but when they appear at his hearings, uninvited, he not only refuses them the right to speak but he has them handcuffed and taken to jail. Is this my country, the nation where we are guaranteed freedom of assembly and freedom of speech, or has it morphed into a nation run without rights for its citizen, with the population answerable only to the corporations that bribe our elected representatives?

On Monday night, an emergency health care briefing was held with Dr. Howard Dean. More than 20,000 persons signed up for it — the biggest conference call ever. Dr. Dean made a key point during the briefing: “If there is no public insurance option — then this is not health reform at all.” To date I have heard no discussion of the bill for universal health care introduced into the Senate by Sen. Bernie Sanders. Of course some of the Obama handlers have marginalized Dr. Dean, a uniquely honest politician.

Sadly, the main stream media has assiduously avoided the now contentious discussion on health care. Even our “liberal” commentators on MSNBC from 5-9 P.M. have pretended that there is no such debate going on in the nation or within the Washington establishment. Step back a moment and think. The newspaper industry is in the financial pits; the TV industry has all but lost automobile advertising; hence, two crippled “news” sources are greatly dependent on advertising revenues from the pharmaceutical, insurance, hospital and medical supply industries. Are we going to get any fair, in depth, discussion of health care for all Americans from our normal media. If you want to find the truth go to the internet.

We were hopeful that the Democrats would bring change; however, it has become only too apparent that many of our legislators on that side of the isle are also bought and paid for by the corporations. To see for yourselves go to

It is also interesting that the Republicans who mouth desire for better health care, when asked for a solution, once again respond with their ongoing mantra regarding tort reform. “The high cost of health care is due to the trial lawyers and the malpractice hazard.” In reality legal problems amount to less than 1% of healthcare costs. Enough said, we know already that the Republicans, by and large, are corporate toadies and will offer no reasonable plan. It is the Democrats, who appeared to back the Obama call for change, that are the disappointment; although anyone with a keen sense of history and of human nature is familiar with baksheesh and its behavioral effect.

The “flu crises” creates other problems about our health care in this nation of unchallenged capitalism. The New York Times recently in an editorial reminds us that The President, as a reasonable public health measure,suggested that those with flu symptoms stay home from work. Problem: about 60 million workers do not have paid sick leave, Many will be fired if they stay home. And if not fired, many cannot afford to lose the hours. 43% of Americans have no sick days at all. Yet, as The Times indicates. 160 countries have laws that ensure all their citizens receive paid sick leave, and more than 110 guarantee paid leave from the first day of the illness. Perhaps, Senator Baucus, you should incorporate some of these stipulations in your health care discussion. Forget it, your handlers would never permit such government intrusion into their culture just as they will fight to the death against The Employees Free Choice Act.

I would suggest that — in spite of Senator Baucus and his corporate handlers — the American people must be heard. In many European nations the heavy fisted suppression of free speech in the Baucus hearings would have produced a virtual general strike with swarms of folks taking to the streets. In our “free” nation such activity is looked on harshly and we shouldn’t be surprised at the heavy-handed police response; hence, proceed slowly. I note that demonstrations are planned for a Day of Action on May 30 in support of Hr 676 and S 703. (Information at Healthcare-Now) We must try, but we must not expect any comfort from the powers that be.

You might ask, does this old duffer have the right to criticize a U.S. senator in this manner?. Perhaps I do not; however, my forbearers were at the Battle of Bushy Run in the French and Indian War, they were active in the events of 1776 and 1861, and a cousin of my grandmother made the well known statement (in my opinion a bit overblown) “Lafayette We are Here.” Thus, though I am no Zola, humor me, as I once again ask this nation to revisit the intentions of Franklin, Paine, Jefferson, Madison, et al. The United States was founded as a secular nation designed to represent the interests of its citizens, not the interests of the folks who become extremely wealthy off the labor of others, and still deny them the opportunities for health care and a decent everyday life. One notes that the average American CEO makes 400 times more per day than the average worker, while in Europe the average is merely 20 times more. An excellent article on this appears in the Magazine Section of the May 3, 2009, New York Times entitled “Going Dutch.”

NOTE: Shortly after I finished this article The Ed Show on MSNBC gave an excellent account of the denial of civil rights before the Baucus committee and also publicized the amount of money that the Senator receives from the insurance and pharmaceutical industries. Our thanks and gratitude to Ed!