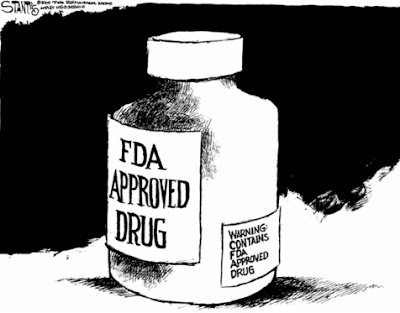 Big Pharma Pushes Drugs That Cause Conditions They Are Supposed to Prevent
By Martha Rosenberg / July 24, 2008.

Yet again, women are the industry’s main targets.

Like gastroesophageal reflux and bipolar disease, osteopenia began to inflict millions when a drug to treat it was patented.

“Osteopenia, or the risk of developing osteoporosis, was concocted as a disease at a World Health Organization osteoporosis conference in Rome in 1992 that was sponsored by two drug companies and a drug company foundation,” writes Susan Kelleher in the Seattle Times.

Using the bone density measurements or “T scores” of a 30-year-old woman as a standard, the new condition, osteopenia, had “boundaries so broad they include more than half of all women over 50,” writes Kelleher. And it didn’t hurt that 10,000 bone density measuring machines appeared in doctors’ offices to detect the new disease — only 750 existed in 1995 — many owned and financed by Merck, whose anti-bone-thinning drug Fosamax came online in 1995.

No wonder doctor visits for thinning bones increased by 5 million from 1994 to 2003, according to the Associated Press.

Of course, selling “prevention” to at-risk patients is a pharma gold mine.

It keeps patients on meds for decades through fear, alarmist marketing and after-this-because-of-this reasoning — since a patient doesn’t know if she would have gotten the disease anyway.

So even when reports of Fosamax-related jaw problems called osteonecrosis surfaced — 1,000 cases have been documented — and even when a study in the Archives of Internal Medicine this year found that Fosamax doubled women’s risk of irregular heartbeat, which can cause clots and strokes, few doubted its primary action of protecting women’s bones.

But now, like hormone replacement therapy, which also exploited women’s fear of aging and social marginalization, Fosamax appears to cause the conditions it’s supposed to prevent.

Since 2006, articles in the New England Journal of Medicine, Journal of Orthopedic Trauma, Journal of Bone and Joint Surgery, Journal of Clinical Endocrinology & Metabolism and Aging Clinical and Experimental Research have suggested the anti-bone turnover action of bisphosphonate drugs like Fosamax can in some cases cause fractures.

While preventing bone loss that is caused by the process of bone turnover or remodeling, bisphosphonate drugs can fossilize and petrify a bone so it breaks spontaneously and with minimal trauma — like chalk. It will not heal properly.

Thighbones of patients on bisphosphonates have “simply snapped while they were walking or standing,” following “weeks or months of unexplained aching,” reports the New York Times.

Like other fast-tracked-to-Wall-Street drugs that are effectively “tested” on the first users, adverse reports about bisphosphonates came from patients and practitioners long before they came from the FDA or manufacturers.

Bisphosphonate patients have documented excruciating pain from Fosamax since 2001 and GlaxoSmithKline’s Boniva since 2006 on askapatient.com, many calling the drugs “poison” and saying they were forced into wheelchairs.

But only in March did the FDA alert health care professionals to the “severe, sometimes incapacitating, musculoskeletal pain” that bisphosphonate drugs could cause in their patients and caution them to consider whether musculoskeletal pain “might be caused by the drug” rather than the bone condition.

Not only is the pain that bisphosphonate patients report “not in their heads” — imagine 1,257 men on askapatient.com saying their doc dismissed their constant pain and symptomology — it is emblematic of what is really going on.

“There is actually bone death occurring,” Dr. Phuli Cohan told Mallika Marshall, M.D., a medical reporter for Boston’s WBZ-TV News in May. “People don’t want to believe that this is happening, but it is a side effect of the medicine,” she said.

Dr. David Hunter of New England Baptist Hospital concurs that bisphosphonates can cause “dead bone syndrome” and that patients should have a “drug holiday to allow bone cells to rejuvenate,” reports Marshall.

Even drug reps on the industry chat room cafepharma are skeptical about bisphosphonates.

“They over-suppress the bone and ‘may’ cause subtrochanter fractures. … It’s the next hot button,” wrote one anonymous poster on a thread titled “Is Boniva dead?” sparked by a rumor that Boniva pitchwoman Sally Fields had fallen and broken a bone.

Nor do bisphosphonates exit the body quickly when patients quit taking them, according to a 2006 study in the Journal of the American Medical Association — rather, they remain for years.

(Patients “need not take costly bone-building drugs such as Fosamax for life to reap the medicine’s protective benefits,” was the News & Observer’s upbeat interpretation of the drug’s tenacity.)

Will bisphosphonates be the next hormone replacement therapy? Another example of women getting the diseases they were supposed to avoid, thanks to misogynistic marketing?

Is there a market for 10,000 used bone density measuring machines?

1 Response to HEALTH CARE : Bone Density Drugs Can Do More Harm Than Good