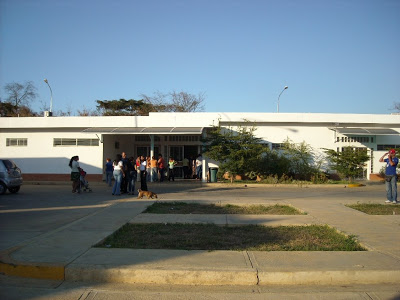 New Venezuelan clinic built by community with funds given from municipality. When communities build projects such as this, they provide some labor and serve as the contractor — thus allowing a lot to be done at lower costs than usual.
Health Care and Democracy: A Look at the Venezuelan Healthcare System
By Caitlin McNulty / June 25, 2009

The right to health care is guaranteed in the Venezuelan Constitution, which was written and ratified by the people in 1999. Through implementing a state-funded social program called Barrio Adentro, or inside the barrio, free comprehensive health care is available to all Venezuelans. Beginning in June 2003 through a trade pact with Cuba, Venezuela began to bring Cuban doctors, medical technology, and medications into rural and urban communities free of charge in exchange for low-cost oil.

The 1.5 million dollar per year program expanded to provide a broad network of small neighborhood clinics, larger regional clinics, and hospitals which aim to serve the entire Venezuelan population. (1) Chavez has referred to this new health care system as the “democratization of health care” stating that “health care has become a fundamental social right and the state will assume the principal role in the construction of a participatory system for national public health.” (2) In Venezuela, not only is health care a right; it is recognized as an essential for true participatory democracy.

Some of what characterizes this movement towards health care for all includes popular participation, preventative medicine, and evaluation of community health issues. Western medicine typically operates in a top-down fashion. Doctors treat symptoms, and often fail to evaluate the larger picture of community health issues or teach prevention. (3) In a private for-profit system, there is little incentive to prevent costly illnesses. In Venezuela, however, Barrio Adentro began constructing clinics within neighborhoods where many had never been to a doctor. Through this program, a community can organize to receive funding to build a clinic and bring in doctors. The community is responsible for creating health committees, the members of which go door to door to assess the specific health issues of their community. Doctors who live in the communities also make house calls. (4) People participate in the process of serving the health needs of the entire population.

The extensive health program is also being used to train a new generation of Venezuelan doctors. The training program takes place within the clinic system itself and relies heavily on experiential learning. The program seeks to build a new relationship between doctor and patient based on the values of service, solidarity and compassion. Doctors participating in the training program are coming from the communities they are learning in and serving, building on their intimate knowledge of the communities to provide truly compassionate and personalized care. Using popular forums, medical professionals are able to respond to the needs of the community and offer education, treatment and consultation addressing unique public health issues.(6)

Although the system began by focusing exclusively on preventative health, it has expanded to include emergency health services, mental health services, surgeries, cancer treatment, dental care, access to optometrists as well as free glasses and contact lenses, support systems for those with disabilities and their families, as well as access to a large variety of medical specialists. They have succeeded in taking an under funded, corrupt public health care system and changing not only the quality and accessibility but also the mentality of those working there. Instead of a for-profit industry systematically denying access to large sectors of the population, health care in Venezuela is seen as a basic human right. No one is turned away, and no one is denied care. In Venezuela, they treat whole person, not simply their illness, and money stays where it belongs- outside of the health care system.(7)

During my time in Venezuela, I developed a cough that went on for three weeks and progressively worsened. Finally, after I had become incredibly congested and developed a fever, I decided to attend a Barrio Adentro clinic. The closest one available was a Barrio Adentro II Centro de Diagonostico Integral (CDI) and I headed in without my medical records or calling to make an appointment. Immediately, I was ushered into a small room where Carmen, a friendly Cuban doctor, began questioning me about my symptoms. She listened to my lungs and walked me over to another examination room where, again without waiting, I had x-rays taken. Afterwards, the technician walked me to a chair and apologized profusely that I had to wait for the x-rays to be developed, promising that it would take no more than five minutes. Sure enough, five minutes later he returned with both x-rays developed. Carmen studied the x-rays and informed me that I had pneumonia, showing me the telltale shadows. She sent me away with my x-rays, three medications to treat my pneumonia, congestion, and fever, and made me promise to come back if my conditioned failed to improve or worsened within three days.

I walked out of the clinic with a diagnosis and treatment within twenty-five minutes of entering, without paying a dime. There was no wait, no paperwork, and no questions about my ability to pay, my nationality, or whether, as a foreigner, I was entitled to free comprehensive health care. There was no monetary value connected with my physical well-being; the care I received was not contingent upon my ability to pay. I was treated with dignity, respect, and compassion, my illness was cured and I was able to continue with my journey in Venezuela.

This past year, a family friend was not so lucky. At the age of 56, she was going back to school and was uninsured. She came down with what she thought was a severe case of the flu, and as her condition worsened she decided not to see a doctor because of the cost. She died at home in bed, losing her life to a system that did not respect her basic human right to survive. Her death is not an isolated incident. Over 18,000 United States residents die every year because of their lack of prohibitively expensive health insurance. The United States has the distinct honor of being the “only wealthy industrialized nation that does not ensure that all citizens have coverage”.(8) Instead, we have commodified the public health and well being of those live in the US, leaving them on their own to obtain insurance. Those whose jobs do not provide insurance, can’t get enough hours to qualify for health care coverage through their workplace, are unemployed, or have “previously existing conditions” that exclude them from coverage are forced to choose between the potentially fatal decision of refusing medical care and accumulating medical bills that trap them in an inescapable cycle of debt. And sometimes, that decision is made for them. Doctors often ask that dreaded question; “do you have insurance?” before scheduling critical tests, procedures, or treatments. When the answer is no, treatments that were deemed necessary before are suddenly canceled as the ability to pay becomes more important than the patient’s health.(9)

It is estimated that there are over fifty million United States residents currently living without health insurance, a number that will skyrocket as unemployment rates increase and people lose their work-based health care coverage in this time of international financial crisis.(10) Already this year, 7.5 million people have lost work-related coverage. Budget cuts for the state of Washington this year will remove over forty thousand people from Washington Basic Health, a subsidized program which already has a waiting list of seventeen thousand people.(11) As I returned to the US from Venezuela, I was faced with the realization that as a society, the United States places a monetary value on life. That we make life and death judgments based on an individual’s ability to pay. And that someone with the same condition I had recently recovered from had died because, according to our system, her life wasn’t insured.

Many in the United States fear that people would abuse a free health care system, causing overcrowding and a compromised level of care. Others claim that a single payer system would limit the freedoms of both doctor and patient. These claims, propagated by the corporate media in the United States, are a hollow attempt to keep those in the US from organizing to demand single payer health care. Primary care and preventative medicine are seen as the first steps towards sustainable universal health care, keeping people out of costly hospital stays, tests, and treatments down the road. Socializing the costs of medicine keeps costs low by preventing expensive treatments and health problems. It is difficult to understand how much quality, free health care means until you find yourself in a position of vulnerability and need. I felt a sense of security traveling in Venezuela that I do not feel in the United States; in Venezuela, there is a safety net ready to catch you when you fall. People in the US must ask themselves, as a country, where our values lie and how we have not only let people slip through the cracks but worked to systematically exclude them. Do we believe that insurance corporations and the medical industrial complex should be profiting from denying care and keeping sick people from receiving treatment? Or do we believe that care should be separate from an individual’s ability to pay? As a nation, we must embrace our humanity and value life over profits.

This entry was posted in RagBlog and tagged Health Care, Latin America, Venezuela. Bookmark the permalink.