Health Care Reform and the Senate : Do as the Romans Did 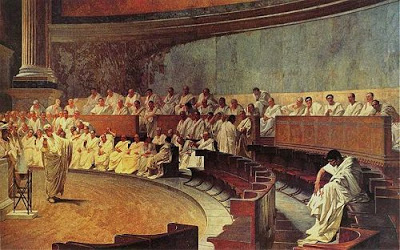 Cicero addresses the Roman Senate in a 19th century fresco. Image from Wikipedia Commons.
Cicero put the Senate itself on trial

‘…if [Gaius Verrus’] immense wealth is sufficient to shatter your honesty — well then… they will certainly know all they need to know about a jury of Roman senators!’

The Roman criminal court, in the days of The Republic, convened in the Forum before the Temple of Castor and Pollux. In the year 70 BC, Verres, governor of Sicily,was on trial for corruption, theft, and embezzlement, before the praetor Aclius Glabrio and a jury of 23 of The Senators. The prosecutor was Marcus Cicero who was well aware that Verres was a friend and benefactor of many members of The Senate.

Cicero began his prosecution with the following words to the Senators: “But the character of the man I am prosecuting is such that you may use him to restore your own good name. Gaius Verrus has robbed the Treasury and behaved like a pirate and destroying pestilence in his provence of Sicily. You have only to find this man guilty, and respect in you will be rightly restored. But if you do not — if his immense wealth is sufficient to shatter your honesty — well then, I shall achieve one thing at least. The nation will certainly not believe Verres to be right and me wrong — but they will certainly know all they need to know about a jury of Roman senators!” Great crowds of common folks had gathered in respect to Cicero — as the trial progressed the weight of the evidence and the mood of the multitude did indeed lead to the conviction.

How does this relate to the health care hearings in the U.S. Senate? Quoting from the June 22, 2009, Nation: “Writing on The Atlantic’s website, Scott Bland and Donald Brownstein identify of what they dub ‘The Democratic Industrial Complex.’ Energy and health care companies, automakers and banks all understand that the Democrats control much of their fate, so they’ve cast their lot with the majority party in a big way: John Kerry got less than 20% of the donations from electric utilities; Barack Obama got almost 60%. So far in this cycle, Democrats have captured two-thirds of the donations from the health care industry.”

Tom Hinton, president and CEO of The American Consumer Council, elaborates on the baksheesh that Sen. Max Baucus has received from the insurance companies, pharmaceutical companies, and others to whom universal health care is anathema. The Washington establishment is awash in corruption and graft. Thus, little concern for the needs of the American people.

The Republicans continue to collect their dues; for instance Sen. Charles Grassley has collected $1.3 million in donations from industries related to the health care debate. Obviously 65% of American citizens and 63% of American physicians are to be ignored by our elected representatives.

The AP reports that Sen. Edward Kennedy has offered a plan requiring employers to offer health care to employees or pay a penalty. In addition the bill would provide subsidies to poor people to pay for care, and require everyone to purchase health insurance, with exceptions for those who cannot afford it.

Once again we are faced with the little discussed problem of requiring everyone to purchase insurance from a private insurance company. Is this constitutional? Karl Manheim and James Court of the Loyola Law School are quoted in the Christian Science Monitor discussing this question in detail

Finally, President Obama released a letter on June 2, 2009, addressed to Chairman Baucus and Chairman Kennedy. His concluding paragraph: “I strongly believe that Americans should have the choice of a public health insurance option along side private plans. This will give them a better range of choices, make the health care market more competitive, and keep insurance companies honest.” This was released by Health Care for America Now, among others.

Dr. Paul Krugman congratulated the President in his column in the June 5 New York Times. Krugman gave two worthy bits of advice: 1. Don’t trust the insurance industry; 2. Don’t trust the insurance industry. One might add to Dr. Krugman’s advice; beware of the falsifications on TV relative to health care in Canada or Europe. Overall health care in France per any objective reporting ranks first while the United States is 26th. The June 8 issue of Time Magazine provides a brief overview of health care in certain countries abroad. The Joseph Goebbels and the Leni Riefenstahls of the insurance/pharmaceutical companies’ TV programing will convince the uninformed and the naive otherwise.

President Obama has equivocated on many issues but we hope that he remains steadfast on this one, just as we hope that he remains true to his foreign policy goals as enunciated in Cairo where he was somewhat reminiscent of Prince Metternich after the Congress of Vienna. It seemed a true effort to achieve peace in the world and at the same time retrieve the character of the United States as envisioned by its founders. Yet the president is loath to truly revise the Bush/Cheney horrors of Guatanamo, undue the policy of rendition, abrogate the illegal wiretapping, remove the mercenaries from Iraq and Afghanistan, and release the torture photographs. One must hope that he does not give way to corporate interests in the area of universal, affordable health care, not dictated by big business, but granting to our citizens what is a right and in the end what is in the best interests of the nation at large. I personally still favor single payer, universal care, as the most inclusive, least expensive option, as recommended in the 25 year study by Physicians For A National Health Care Policy.

In my last submission I suggested that marijuana be decriminalized, its sale be licensed, and that a tax be levied as a way of paying in part for universal health care. Since then I saw this in an article by Alfredo Corahado, a Nieman Fellow at Harvard University writing in The Wilson: “The story of drug violence and cartels overwhelming vulnerable democracies is one of the oldest tales in Latin America. Indeed, Mexico is proving — as have Columbia, Peru and Bolivia — that the war on drugs is unwinnable as long as Americans fail to curb their insatiable appetite for illicit drugs”.

The author continues: “After nearly 40 years, U.S. drug policy, at a cost of $40 billion a year, is generally viewed as a failure. In a recent report by the Latin American Commission on Drugs and Democracy, three former heads of state, of Mexico, Columbia, and Brazil, called for a new approach, namely, decriminalizing marijuana. Yet any proposal that smacks of decriminalization is political suicide in the United States.”

Where did the seemingly unassailable prejudice against the use of marijuana originate in the united States. We once had a similar unfounded prejudice regarding absinthe which has now been found to be essentially fictitious and it is now available in most liquor stores. But where did the mythology regarding pot originate? According to the Austin Peace and Justice Coalition Newsletter of November 1993, marijuana (hemp) prohibition was driven by specific commercial interests. William Randolph Hearst started the whole racist “reefer madness” scare. He owned timberlands as well as newspapers. Hemp paper competed with timber, and, with hemp-harvesting equipment patented in 1937, would have cut costs for Hearst’s news competitors. The DuPont chemical and Lilly pharmaceutical firms — increasingly reliant on petroleum — also pushed cannabis prohibition. Cannabis sativa was used in dozens of cheap, safe, effective medicines that Lilly et al could not patent or control. At the time tobacco interests, beer, wine, and other alcohol interests worried that cannabis legalization would cut into their profits, and on and on.

The moral guardians joined the fray in spite of the fact that alcohol and certain prescription medications kill, and cigarettes cause lung cancer. Hearst’s anti-hempster Harry Anslinger, convinced of the debilitating effects of killer weed, testified that its use would make pacifists of military age men! Today, hemp activists take the moral initiative, pointing out that truth in drug education is better than lies; that marijuana-only “offenses” are nonviolent victimless crimes. Once I thought about the prohibition of cannabis, which was not one of my priority interests, I suspected that there must be a financial motive somewhere, as there is in most sereptitious maneuvers in the USA. So there was, and so there is. So often the big corporations flim-flam the “moralists” and use them to their own advantage.

I am not asking that an immediate revision in drug laws be made re: cannabis, and I am not suggesting that cocaine, the opium derivatives, LSD, “angle-dust,” and the amphetamines be decriminalized. I am suggesting that the FDA, and our public health agencies seriously, scientifically, study the effects of certain types of cannabis, and then consider legalization and distribution with federal taxation as is done with alcohol and tobacco.

I do believe that, with the Bush departure, our federal agencies that have to do with health care are once again managed by scientists rather than by political hacks. At the same time I would request that the Justice Department take a hard look at the sentencing laws for the possession of pot. Most other Western nations consider possession or use to be concerns for rehabilitation, if addiction does exist, rather than incarceration. Our prisons are overcrowded with nonviolent offenders at the costs of billions of dollars to the taxpayers which would be much better spent on universal health care among other things. Further, the government will save millions of dollars on futile and sometimes ludicrous enforcement. I recently heard of a woman serving three years in a local prison for growing several cannabis plants in her yard, yet the folks on Wall Street who brought down the nation’s economy go free.