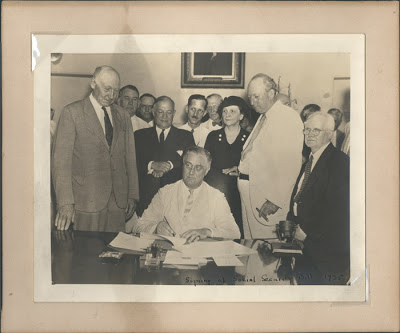 For the past few weeks Americans who consider themselves leftists have been arguing among ourselves about whether we should declare any support for the medical insurance reform bill that the Senate passed early Monday.

I have nothing to add to the dispute, except 133 words from the January 1937 issue of the Southern Worker, a newspaper published by the Communist Party, USA with a Birmingham, Alabama dateline from 1930-37:

Already… workers are beginning to realize that the Roosevelt social security program does not offer them real security and to demand something better. The old-age pensions offered under the present act are inadequate. They are based on wages and would run as low in some cases as $10 a month. And they will not begin to be paid until January 1, 1942.

No pensions are provided for persons who are already 65, or who will be 65 by 1942. To be eligible a person must have earned at least $2,000 during that time. Thus the very neediest cases will be among those who will not get pensions. No pensions are provided for agricultural workers, domestic servants, casual laborers, marine workers, government employees… and employees of charitable, educational or other non-profit organizations.

[Dick J. Reavis — a former Austin activist and journalist who wrote for The Rag in the Sixties — is an assistant professor at North Carolina State University. His latest book, Catching Out: The Secret World of Day Laborers, will be published in February by Simon and Schuster. He can be reached at dickjreavis@yahoo.com dickjreavis@yahoo.com.