Health Care Reform : The End of the Beginning 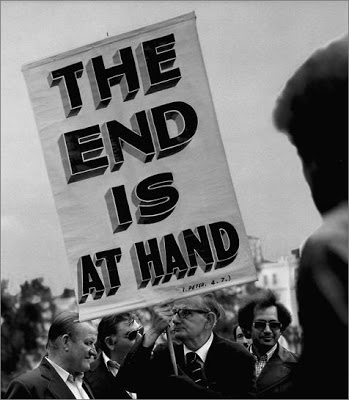 Photo from Circlemp / treehugger.
The end of the beginning:
How ‘historic’ is this reform?

Health care reform was finally passed by the House and Senate and many consider it an historic occasion. But let’s look at that “historic occasion” and view the legislation objectively. This is primarily health insurance reform and does not produce a sensible program of health care for all citizens on the level to those found in most countries of the civilized world.

We can address that a bit later; however, I am alarmed at the spin-off of a very disruptive right-wing populist movement in the United States, which has emerged out of reaction to the fight for health care reform.

Many of my progressive friends consider this to be a passing phenomenon; however, let us pause for a moment and remember the 9th-10th of November 1938 in Berlin or the 17th Century witch trials in Salem, Massachusetts. Perhaps at my advanced age, with lots of unpleasant memories, I am unduly alarmed; however, more than one social scientist feels that the tea bag movement, which is surreptitiously financed by extremely wealthy members of the financial elite, is of much more concern than many of my liberal friends believe.

I refer all to an article by Chip Berlet, of Political Research Associates, entitled “Right wing ‘populist moment’ could get worse. Message to the Left: stop whining and organize!”

I recall the writings of Eric Hoffer when he noted:

The impression that mass movements, and revolutions in particular, are born of the resolve of the masses to overthrow a corrupt and oppressive tyranny and win for themselves freedom of action, speech and conscience has its origin in the din of words let loose by the intellectual originators of the movement in their skirmishes with the prevailing order. The fact that mass movements as they arise often less individual freedom than the order they supplant, is usually ascribed to the trickery of a power-hungry clique that kidnaps the movement at a critical stage and cheats the masses of the freedom about to dawn.

Coverage on MSNBC last evening was largely dedicated to the proliferation of extreme threats of violence to members of Congress — and their spouses and children — who voted for the health care legislation. Not only are the threats based on misinformation, deceit, and out and out lies, but the foul language being used suggests serious paranoia. It has been estimated that 30% of the population is involved in the right-wing movements; but, considering that the population of the United States is something like 300 million, that’s a lot of crazies.

According to the Erie Times News, my local congressperson, Democrat Kathy Dahlkemper, is receiving extremely frightening messages directed at her and her family. This is a locale where folks line up at the Wal-Mart some mornings waiting for the doors to open so they can buy more ammunition, and where a local gun dealer has problems maintaining his stock in certain types of weapons.

I have disagreements with some of Ms. Dahlkemper’s votes; however, she has given the citizens of her district much more input into matters of national importance than her Republican predecessor did, and she seems much more enlightened in matters of the public good than her likely Republican challengers. In a civilized nation she is deserving of our concern and protection.

I hope that the news media will rise to the occasion and present the news in a fair and honest fashion during the period leading up the elections this coming Autumn, and not give in to the influence of the waves of corporate baksheesh. Meanwhile, it is the responsibility of the Democrats in power to take a cue from the Republican voice machine and do a much better job of getting out the truth to the 70% of the American people who may pay attention to morality and reason

I have had the privilege of following the progress of health care reform on the pages of The Rag Blog for over a year now. This has been an invaluable experience in my final years, and I will forever be grateful to the editor for his forbearance and patience. I would anticipate that my participation will be at irregular intervals in the future, but before I close the current exposition, a few observations:

The current insurance reform legislation in no way resembles a government take over of health care. In fact, as E.J. Dionne of The Washington Post and Commonweal points out, we have a bill that the Republicans could well have passed. It is very similar to the health care legislation that was passed in Massachusetts when Mitt Romney was governor.

There is absolutely nothing in the legislation that resembles a single payer system or even a public option, Medicare for All.

There is nothing in the legislation that approximates the excellent German health system that is, in fact, run by private insurance companies with government oversight of costs and services. Nor is it anything like the Canadian system — for which its driving force, Tommy Douglas, was voted by the people of Canada “the greatest Canadian of all time.”

I notice that health insurance stocks are doing quite well on Wall Street! Unfortunately, in the new legislation there is no effort to control insurance prices or to eliminate the health insurance industry’s anti-trust exemption. I am concerned about the mandatory inclusion of citizens in the plan under threat of fine, and — unlike the Swiss or German plans — it doesn’t at the same time set standards to ensure that the insurance companies provide adequate coverage, and to prevent price-gouging.

I would have wished for less equivocal language regarding the rights of the states to establish honest, effective plans — like that currently proposed in the Commonwealth of Pennsylvania. I would have hoped for the inclusion of community health clinics, as proposed by Sen Bernie Sanders, to be established on the European model. And that the establishment of medical dispensaries be expedited — to address the crowding of emergency rooms and thus reduce the overall cost of medical care, while at the same time providing a reasonable option for follow-up care. These facilities are absolutely necessary considering the fact that the fees paid under Medicaid make it economically impossible for a physician to take many of these folks as ongoing patients and still be able to cover office overhead.

There was some encouraging language in the legislation regarding subsidies for medical education that should result in more physicians for underserved areas; however, this requires much more fine tuning. As has been repeatedly pointed out by the American College of Physicians, much more attention must be directed at the paucity of primary care physicians — general internists, pediatricians, and family physicians — throughout the nation.

This problem is largely due to the inequitable fee schedules for these fields when compared with those in the surgical subspecialists, who are very well rewarded despite spending no more time in training than the internist or pediatrician. This has become a societal problem, largely driven by misinformation on TV that creates the myth that it is only those in the highly publicized specialties who are really in the “life saving” business.

We should express thanks for the collective courage of the orders of Sisters throughout the nation who came out in support of universal health care, especially in the face of pressure from their ecclesiastical “superiors.” We must remember the dedication of the nuns in the areas of healing dating back to the great medieval hospitals they founded during the Middle Ages, including the Hotel-Dieu in Lyons in 542; the Santa Maria della Scala in Siena in 898; St. Bartholomew’s in London in 1123; the Ospedale di Santa Mana degli Innocenti in Florence in 1421; and the Hotel-Dieu in Beaune in 1452.

These Sisters cared for the ill, the infirm, the dying, and the mentally ill without regard to pay or their own well-being as they administered to the dying during the plague. At the same time, the Papacy in Rome, influenced by the Borgia family, was pursuing other less spiritual interests!

In any event we have in hand a bill that according to the AP:

We must congratulate the Congress, in a supplement to the health care legislation, for providing student loans directly to the students, and preventing the banking industry from gouging the program as has been the practice in years past.

16 Responses to Health Care Reform : The End of the Beginning