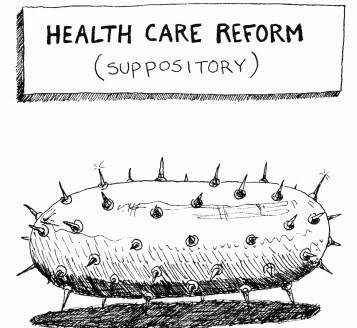 Cartoon by Puckett from Stand Up For America.
Congress’ health care fix:
Cure worse than the disease?

“History records that the money changers have used every form of abuse, intrigue, deceit, and violent means possible to maintain their control of government.” — James Madison (With thanks to Steve Berry, The Paris Vendetta)

Christmas arrived with the much publicized terrorist “almost” incident in Detroit, thus giving Fox News and the Republicans another issue to distort and with which to further spread fear among the American public. This worked quite well for Bush/Cheney in 2001; however, perhaps, just perhaps, the American people will have a more mature, more sophisticated reaction to the present episode. 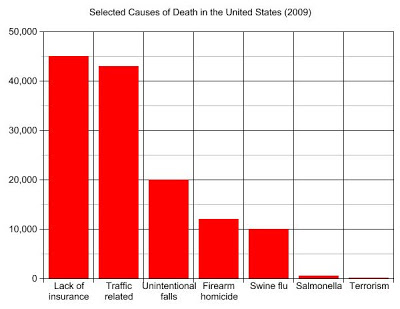 Chart from Firedoglake.
Firedoglake published an article that helps to put the situation into perspective. It charts selected causes of death in the United States for 2009 as follows:

With that in mind we return to the ongoing discussion of health care reform, while asking if the pending legislation before Congress will indeed reduce those 45,000 deaths or whether it is, as it has been called by some, “The Health Insurance Enrichment Act.”

In recent days the progressive press has placed more and more attention on the bill’s potential encroachment upon our civil liberties through mandating that an individual be forced by fiat to purchase health insurance from American’s for profit insurance cartel.

An article on Firedoglake by emptywheel entitled “Health Care on the Road to Neo-Feudalism” tells us that “the bill, if it becomes law, would legally require a portion of Americans to pay more than 20% of the fruits of their labor to a private corporation in exchange for 70% of their health care costs.” The author continues,

Consider a family of four making $66,150 — a family at 300% of the poverty level and therefore, hypothetically, at least ‘subsidized.’ That family would be expected to pay $6482.70 (in today’s dollars) for premiums — or $540 a month. But the family could be required to pay $7973 for copays and so on. So if that family had a significant — but not catastrophic — medical event, it would be asked to pay the insurer almost 22% of its income to cover health care.

Senate Democrats are requiring middle class families to give the proceeds of a month of their work to a private corporation — one allowed to make 15% or maybe even 25% profit on the proceeds of their labor. It is one thing to require a citizen to pay taxes — to pay into the commons. It’s another thing to require taxpayers to pay a private corporation, and to have 25% of that go for paying for luxuries like private jets and gyms for the companies CEOs.

Previously on The Rag Blog I have suggested that legislation requiring Americans to buy from a private corporation is unconstitutional.. This question again arises in an article by Ellen Hodgson Brown, J.D. , published in Truthout. Ms. Brown is not a newcomer to the health care discussion; she is co-author of a Forbidden Medicine, Natures Pharmacy, and The Key To Ultimate Health.

The health reform bills now coming through Congress are not focused on how to make health care cheaper or more effective, how to eliminate waste and fraud or how to cut out expensive middlemen. As originally envisioned, the public option, would have pursued those goals. But the public option has been dropped from the Senate bill and radically watered down in the House bill.

Rather than focusing on making health care affordable, the bills focus on how to force people either to buy health insurance if they don’t have it, or to pay more for it if they do. If you don’t have health insurance and don’t purchase it, you will be subject to a hefty fine. And if you do purchase it, premiums, co-pays, co-insurance payments and deductibles are liable to keep health care cripplingly expensive. Most of the people who don’t have health care can’t afford to pay the deductibles, so they will never use the plans they have been forced to buy.

Terrance Heath’s lengthy and well-written article at Campaign for America’s Future entitled “The Window or the Stairs: Kill the Mandate or Kill the Bill,” makes this point:

My take is that it is unconscionable to force people to buy a product from a private insurer that enjoys sanctioned monopoly status. It’d be forcing everyone to attend baseball games, but instead of watching the Yankees, they were forced to watch the Kansas City Royals. Or Washington Nationals. It would effectively be a tax — and a huge one — paid directly to a private industry.

Where are the civil libertarians regarding this issue? Where is the ACLU, of which I have been a member for years? Perhaps the ACLU had best forget complaining about total body scanning at our airports and redirect its attention to this much larger issue of personal rights. I prefer to be safe when flying, and did not object to a strip search by El-Al in London some 25-30 years ago. And I did not object to El-Al’s “profiling” that had nothing to do with race or ethnic background, nor to the extra stewards on the flights, well aware that these gentlemen were subtly armed, en route from Kennedy to Tel Aviv, or Tel Aviv to London.

Jane Hampshire in FireDogLake cites reasons that the Senate Bill is unfriendly to the Average American, including the fact that it will be paid for by taxes on the middle class insurance plan you have right now through your employer. It will cause the employers to cut back benefits and increase co-pays.

Many of the taxes to pay for the bill start now, but most Americans won’t see any benefits until 2014 when the program begins. It allows insurance companies to charge older people 300% more than others and grants monopolies to drug companies that keep generic versions of expensive biotech drugs from ever coming to market. It doesn’t allow importation of prescription drugs, which could save consumers $100 billion over 10 years. The cost of medical care will continue to rise, and insurance premiums for a family of four will rise an average of $1,000 a year.

We must remember that this legislation, especially the Senate version, is to a great extent the product of lobbyists for the health insurance and pharmaceutical industries. Common Cause, a nonpartisan, nonprofit watchdog group, blames a “toxic cocktail of insiders and money” for short-circuiting a government-run plan that would have competed with private insurers.

Health industry contributions to congressional candidates have more than doubled so far this decade, rising to $127 million in the 2008 election cycle from $56 million in the 2000 election, with disproportionate sums going to the party in power and to members of committees that oversee health care, according to the Center for Responsive Politics.

If indeed this legislation passes without placing the health insurance industry under the Fair Trade Act, the entire exercise is a sham and a farce. There will be no restrictions on price fixing and collusion among the health insurance carriers. The idea that a few government regulators can control these predators is absurd. Each insurance giant will outmatch the regulators by a personnel ratio of at least 20:1 in defining methods to bypass the regulations and maintain their profits. One can imagine a high school football team playing the New England Patriots. The American public is once again being scammed by their corporate masters and their elected prostitutes.

There is nothing in this legislation that frees the physician to do his duty without interference from the insurance industry. Nothing to free the family doctor from overburdening paper work when he should have that time for seeing the sick. Health care will continue to be rationed to the consumer by the executives and stockholders of the health insurance cartel. The pharmaceutical industry will continue to overcharge the American public and to deprive many folks of lesser means of the medications which they need.

It is not a pretty picture. Our elective representatives have, without shame, taken their constituents to the cleaners.

6 Responses to Health Care Reform : ‘This Won’t Hurt a Bit’