Health Care : Senate Clowns Come Up With a Deal 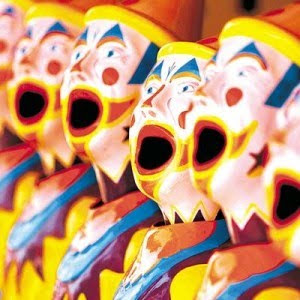 Mark Twain in 1891 described Congress like this: “The smallest minds and the selfishest souls and the cowardliest hearts that God makes.” And little has changed as we watch in action the dysfunctional legislative body that is the United States Senate as it fumbles the ball on health care reform.

Finally the physicians of the United States have overcome their fear and their lethargy and the vast majority are willing to speak up for a government health care program for all Americans. They have been joined in this by most of the nurse’s associations, the bulk of the Union movement, and, in fact, the majority of the American people. Sixty-five percent of Americans approve of a public plan.

And so what happens? Our elected representatives, especially in the Senate, have given away the store to their paymasters in the health insurance and pharmaceutical industries, with the exception of a courageous and honorable few. Now, all that stands between a decent health care system for all and total capitulation to the corporatocracy, is the House Progressive Caucus. One hopes that they are able to exhibit the courage of the Greeks at Thermopile or the Cold Stream Guards holding the perimeter at Dunkirk.

Where is the President in all of this? Mr. Obama would appear never to have had any commitment to universal/single payer health care, and in spite of his campaigning for reasonably priced health care he has bent knee to the health insurance cartel and PhARMA, to which the White House has been an open house since his inauguration. The bow to the Emperor of Japan was minor compared to the deference paid to these two cartels.

I believe that the best description of Mr, Obama’s style of leadership comes from Brendan Cooney, writing in Couterpunch about the president’s handling of the Honduran situation:

But perhaps most haunting of all in this mess is the man in the White House. He showed that while he has better instincts for democracy than his predecessor, the results are the same because he does not act on them. What good is a quarterback who can find the open receiver if he can’t pass the ball?

My fear is that his timidity on these issues — just like his Justice Department’s recent interference in the indictment of John Yu, and the administration’s handling of other matters involving Bush war crimes — will leave him with the same legacy with the American progressives as Pierre Laval left with the majority of the French people in 1940.

We have much to hang our heads in shame about. The Progress Report on November 24 reveals that a record 49 million Americans had trouble finding enough to eat in 2008. The USDA reported in the annual food security report that the number of people who “lacked consistent access to adequate food” soared to the highest level since the study began 14 years ago. Even more disturbing, nearly one in four children — almost 17 million — lived in households in which food at times was scarce. Not only do we let people die in this country for lack of a physician, but we also let them go hungry.

The public option appears to be lost in the Senate. Instead Democrats would allow older Americans starting at 55 to buy into Medicare. There is a definite spin to this. The “buy-in” would not kick in until 2011 and a “subsidized buy-in” would not be available until 2014. And only Americans without current health insurance would be eligible. There is no provision for those paying outlandish premiums for private insurance to switch to the Medicare substitute. And what happens to all those Americans under the age of 55 who are being gouged and deceived by the health insurance cartel?

Sen. Jay Rockerfeller would also require insurers to spend at least 90% of premium money on medical care, rather than on administrative costs or profits. Of course we do not know the details of the proposed deal, nor whether it has any possibility of being sustained by the full Senate. To their credit Senators Feingold and Sanders are reserving judgment.

There was a time, in the early 1990s, when health insurance companies devoted more than 95 cents out of every dollar to paying doctors and hospitals for taking care of their members. No more. Since President Bill Clinton’s health plan died 15 years ago, the health insurance industry has come to be dominated by a handful of insurance companies that answer to Wall Street investors, and they have changed that basic math. Today, insurers only pay about 81 cents of each premium dollar on actual medical care. The rest is consumed by rising profits, grotesque executive salaries, huge administrative expenses, and the cost of weeding out people with pre-existing conditions and claims designed to wear out patients with denials and disapproval’s of the care they need most.

Wall Street investors expect insurers to pay as little as possible for medical claims. As a result, the nation’s health insurance industry has evolved into a cartel of huge for-profit companies that together reap billions of dollars a year at the expense of their policyholders. The seven largest firms — United Group, WellPoint, Aetna, Humana, Cigna, Health Net, and Coventry Health Care — enroll nearly one of three Americans in their health insurance plans. This year the industry will take about 25 BILLION in profits for getting between American patients and their doctors. Further in Firedoglake of December 4, Jason Rosenbaum revealed that Aetna had cut 600,000 people from its insurance rolls to raise its profits for next year. This was in accord with Wellpoint CEO Angela Braly when she said, ‘We will not sacrifice profitability for membership.

Bill Scher in Campaign For America’s Future discusses another part of the Senate deal.

The new compromise proposal would mean an insurance exchange would offer private plans. This alternative would create a national coverage plan operated by private insurers but run by the Office of Personnel Management, which administers health coverage for federal workers, Senators participating in the talks said the OPM idea had been well received across the ideological spectrum, although details were sketchy.

An even stranger idea is to offer the non-profit plans available in the Federal Employees Health Benefit Plan within the exchange. Since the FEHBP is itself a form of exchange, this amounts to offering a new set of private plans within a new set of private plans. How is this going to provide real pressure on private insurers in a consolidated insurance market in which non-profit plans already have a large presence (and often act little differently from the for-profit plans)?

This sounds to me like another variant of the old shell game.

When buying health insurance, the average American is completely cowed by the legalese in the terms of the policy. The information provided by Isaiah Poole, writing in OurFuture, should be very helpful in this regard. Before buying a private health insurance policy it is always best to discuss the specifics of that policy with your attorney or personal physician.

An excellent summary of the overall health care situation is provided by John Garry Maxwell, M.D. — who has practiced surgery in university and community hospitals for 40 years — in his superbly written op-ed in The Wilmington, Star News.

In Great Britain several years ago, a perceptive woman afflicted with a bowel disease requiring a great deal of medical attention, offered me her view: ‘Americans have no sense of community welfare, no willingness to be discomforted in the least for the greater good of the entire population.’

As I have previously noted, we in the United States have a blindspot in this country when it comes to the public good. Our national problem is much larger that how we provide health care to our citizens. At the core, we have become a “what is good for me,” “lets make a lot of money” society. This may well explain why we in the United states are still fighting for the right for all Americans to have decent health care, a right that has existed in Western European nations, in Canada, Japan and Australia, for decades.

8 Responses to Health Care : Senate Clowns Come Up With a Deal