HEALTH CARE / Western Medicine and the Dilemma of Life’s End 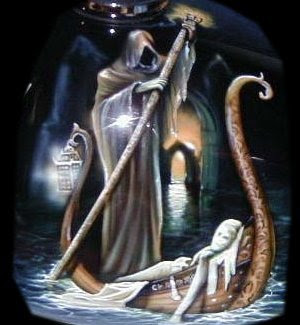 One version of life’s end: Charon the ferryman.

I do not write these observations as a medical ethics expert, but merely as an 87 year old retired physician, a secularist, with cancer of the prostate; thus, with some insight into what lies ahead.’

The mythology of Classical Greece involved the end of life concept that one awaited on the banks of the River Styx for old Charon’s barge to carry one across to the Elysian fields. Unfortunately the 3,000 or more years of the Abrahamic Religions creates a much more complex problem for the current resident of the United States to face, especially in these times of economic uncertainty, as I will explain. These problems are not being discussed, save in very brief reports, by the mainstream media; however, I fear, that many of use who have not faced, or sublimated, the concerns to be addressed will suddenly be faced by harsh realities.

Pope Pius XII further clarified these terms when he said: “But normally one is held to use only ordinary means — according to circumstances of persons, places, times, and culture — that is to say, means that do not involve any grave burden for oneself or another. A more strict obligation would be too burdensome for most people and would render the attainment of the higher, more important good too difficult.” (The “higher goal” he speaks of is “eternal life.”)

This as background for an article noted in the Dec. 3, 2008, issue of The Independent from Ruislip, England regarding a gentleman with widely disseminated cancer of the kidney. His physician advised a new chemotherapeutic agent manufactured by Pfizer, which might prolong his life for up to six months at a cost of $54,000. The problem is that the National Institute For Health and Clinical Excellence approved only $22,750 of the cost of that drug. Thus, a wide discussion in the U.K. as to the price of medication and “how much is life worth.” A debate relative to the ethical/moral needs of prolonging ones person’s life as opposed to depleting a not inexhaustible health insurance fund for treatment of hundreds of folks for the transient benefit of a few.

What if we had an analogous situation in the United States? How would it be resolved. If one is among the 50 million folks in the United States without insurance there would be no problem as the consideration would never arise. If one were insured, or were covered under the grossly flawed Medicare Prescription Plan, I am sure that the insurance carrier would question the medication as an “experimental procedure” and look for an out, and as to the Medicare Drug Plan the carrier would agree to pay a portion after a large deductible.” The Dec. 3, 2008 New York Times listed the amount spent on medications in 24 nations and the United States led the list at $6,714 per capita.

Why do we spend so much for medications? Recently I noted that the pharmaceutical industry spent a half billion dollars on TV advertising of medications to promote sleeping last year. Merely watch TV and every other ad, so it seems, is for a pharmaceutical, the most popular being those medications to aid in obtaining an erection. The price of prescription drugs in this country is a national disgrace, but too extensive to address fully here, thus, if interested, I would suggest buying Marcia Angell, M.D.s book: The Truth About The Drug Companies, How They Deceive Us and What to Do About It. Dr. Angell dispels the fact that most of the pharmaceutical expense goes for “research” when indeed it goes for advertising, lobbying, and executive salaries. We are one of two western democracies that permit advertising of prescription medications.

With the ongoing collapse of the economy our present problems are going to become gargantuan. There are hundreds of thousands of elderly in nursing or old folks homes, supported by their or their childrens IRAs or 401Ks which are disappearing it seems near overnight. We reach a breaking point in the near future, what do we do? Go on Medicaid? Not feasible as the fund is underfunded at present, and the payments to the institution are discounted to a point that financial survival of the facility would be impossible. As unemployment increases, where do once working folks go for care? The already overburdened emergency rooms, of course? The hospitals in most states are required to take in emergency admissions, thus in a populace without insurance who pays the hospital bills, and how do the hospitals survive? Perhaps the various European government overseen health care programs might begin to look good to the powers that be in the United States.

But I digress… Returning to the gentleman from Ruislip. If indeed he is in severe discomfort, and has only six months to live, the hospice services could come into play. We locally have two excellent hospice services for the terminally ill, working with diligence, kindness, empathy, and professional excellence. My personal preference would be to be kept comfortable and at rest rather than being given chemotherapy drugs with all manner of nasty side-effects. This, in turn, raises another immediate issue and that is that one should have an advance directive, or living will, and a power of attorney for medical care granted to a relative or close friend. My living will specifies that I receive no CPR, dialysis, treatment on a ventilator, and no un-needed surgical procedures. I am aghast at the great number of my intelligent friends who do not have living wills.

Finally another alternative available in only the states of Oregon and Washington is “death with dignity” or assisted suicide. This has been in place in Oregon for some years, and as I understand it, works quite well in spite of the many shrill denunciations by the same folks who oppose abortion in the event of rape or incest, or get into a lather regarding “gay marriage.” “Death with dignity” is also available in The Netherlands and Belgium. Switzerland has even opened a new euthanasia clinic in Berne, i.e. The EX International Clinic, competing with another clinic in Zurich, i.e. Dignitas, which offers “assisted suicides based on Christian principles.” The Independent of Dec. 8, 2008 has a full accounting of their offerings. And one can go sightseeing before checking in! For more on this subject I would suggest reading Final Exit, by Derek Humphrey or seeing his website, assistedsuicide.org.

In any event, I fear, the day of reckoning is not far away. We have, largely because of our mobile society, warehoused our elderly in this country, but the money is running out. We have tolerated health care, not worthy of a third world country, at the dictates of the insurance industry, the neo-liberal (supply side) economists, and their prostituted politicians. There is little time ahead to do something constructive, and perhaps it is too late. One hopes that the public arises, throws off its blinders, ignores the propaganda of the insurance and pharmaceutical industries that overwhelm us on TV, and demands that the Obama administration enact single payer, universal health care, as noted in HR 676 and is underwritten by Physicians For A National Health Program. Beware PhARMA is starting a TV propaganda blast, prior to the Obama inauguration, supporting the current Medicare Drug plan which has already made them and the insurance companies a vast amount of money. The lies and misrepresentation will be mind-boggling.

I see some hope to the response at the Door and Window factory in Chicago. The employees fought back, the community organized and supported the workers, the Liberal Media made themselves heard. Seemingly progress has been made. In the 1890’s the citizens led by Eugene Dens prevailed, as they did in the 1930s with the leadership of those such as John L. Lewis and Phillip Murray. Perhaps, just perhaps, the American people will awaken, cast off the propaganda of big business and the current Republican party and take America back. We owe it to our elderly, our poor, our helpless, and our children.