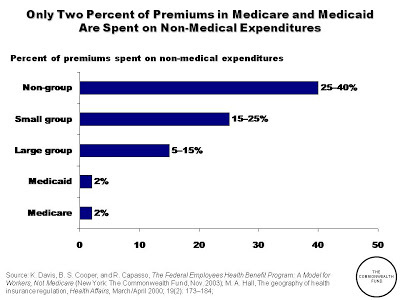 The truth is that the Republicans aren’t opposed to a government-run system because the private companies can do it better and cheaper — they can’t. They oppose the public insurance choice because they want to protect the egregious and exorbitant profits of their rich buddies…

Conservative Republicans have been talking out of both sides of their mouths when discussing health insurance and health care in the United States. First they will tell you that thanks to competition in the marketplace, private insurance can do a better job of holding down health care costs and delivering health insurance that will be better than what the government could do.

But then they turn around and whine that a government-run health insurance program would run them out of business. How can that possibly be, if they can do it better than the government can? Wouldn’t the people want the best product — the one that delivers the most for the least cost? If the private companies can really do it better, wouldn’t consumers flock to that better product?

President Obama put it well in his speech the other night, when he said, “Why would it drive private insurers out of business? If private insurers say that the marketplace provides the best quality healthcare, if they tell us that they’re offering a good deal, then why is it that the government — which they say can’t run anything — suddenly is going to drive them out of business? That’s not logical.”

He’s right. It’s not logical. Unless the Republicans and the insurance companies have been lying to us. And that’s exactly what they’ve been doing. The private companies really can’t compete because they are one of the major causes of the inflated cost of health care.

There are two reasons why they can’t compete. The first is overhead. The private companies are notoriously inefficient, with overhead costs running 15-40% of premiums. By comparison, Medicare overhead is only about 2% of premiums (and there is no reason why another government-run program can’t perform just as efficiently as Medicare). The famous market competition certainly hasn’t helped the private companies to hold down costs.

The second reason is company profits. Private insurance companies aren’t in business to provide exceptional health care to their consumers. They are in business to make a profit — the larger the better. And the sad fact is that the less they pay out for health care, the larger their profits will be. Meanwhile, a government-run health insurance system doesn’t have to show even a penny of profit. Except for the 2% overhead, ALL of the premiums paid to a public insurance system will go to pay for consumer health care.

If the private companies can compete, let them do it. If they can’t, then they should go out of business because they are not providing the best health care for the dollars spent.

The truth is that the Republicans aren’t opposed to a government-run system because the private companies can do it better and cheaper — they can’t. They oppose the public insurance choice because they want to protect the egregious and exorbitant profits of their rich buddies — the owners of private insurance companies.

Our health care system in the United States is a broken mess. Countless millions of people have no insurance coverage at all. Many more are driven into bankruptcy by medical bills (even though most of them had private insurance). Millions are praying they don’t lose their jobs, because if they do they’ll lose what little insurance coverage they have. And millions more are losing their insurance because their bills have gotten too high (even though they’ve paid their premiums).

Forcing everyone to buy private insurance will not solve these problems. It will just give the huge insurance companies their biggest payday, and they can go on abusing their consumers to make ever larger profits.

This is not the time to assure the insurance companies of maximum profits. This is the time to give American citizens health insurance at a decent price, that cannot be cancelled, and provides them with their choice of doctor and hospital. Private companies cannot or will not do that. A government-run insurance system will do it.

The only real fix for our health care mess is public insurance.