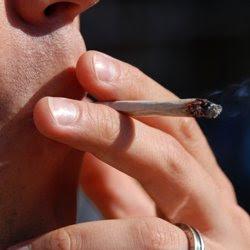 Lahde says pot illegal because corporate America addicted to pharmaceutical profits.
‘All of this behavior supporting the Aristocracy, only ended up making it easier for me to find people stupid enough to take the other sides of my trades.’
By Katherine Burton / October 17, 2008

Andrew Lahde, the hedge-fund manager who quit after posting an 870 percent gain last year, said farewell to clients in a letter that thanks stupid traders for making him rich and ends with a plea to legalize marijuana.

Lahde, head of Santa Monica, California-based Lahde Capital Management LLC, told investors last month he was returning their cash because the risk of using credit derivatives — his means of betting on the falling value of bonds and loans, including subprime mortgages — was too risky given the weakness of the banks he was trading with.

“I was in this game for money,” Lahde, 37, wrote in a two-page letter today in which he said he had come to hate the hedge-fund business. “The low-hanging fruit, i.e. idiots whose parents paid for prep school, Yale and then the Harvard MBA, was there for the taking. These people who were (often) truly not worthy of the education they received (or supposedly received) rose to the top of companies such as AIG, Bear Stearns and Lehman Brothers and all levels of our government.

“All of this behavior supporting the Aristocracy, only ended up making it easier for me to find people stupid enough to take the other sides of my trades. God Bless America.”

Lahde, who managed about $80 million, told clients he’ll be content to invest his own money, rather than taking cash from wealthy individuals and institutions and trying to amass a fortune worth hundreds of millions or even billions of dollars.

“I do not understand the legacy thing,” he wrote. “Nearly everyone will be forgotten. Give up on leaving your mark. Throw the Blackberry away and enjoy life.”

He said he’d spend his time repairing his health “as well as my entire life — where I had to compete for spaces at universities, and graduate schools, jobs and assets under management — with those who had all the advantages (rich parents) that I did not.”

He also suggested that billionaire George Soros sponsor a forum in which “great minds” would come together to create a new system of government, as the current system “is clearly broken.”

Lahde ended his letter with a plea for the increased use of hemp as an alternative source of food and energy that segued into a call for the legalization of marijuana.

“Hemp has been used for at least 5,000 years for cloth and food, as well as just about everything that is produced from petroleum products,” he wrote. “Hemp is not marijuana and vice versa. Hemp is the male plant and it grows like a weed, hence the slang term.”

He added, “The evil female plant — marijuana. It gets you high, it makes you laugh, it does not produce a hangover. Unlike alcohol, it does not result in bar fights or wife beating. So, why is this innocuous plant illegal? Is it a gateway drug? No, that would be alcohol, which is so heavily advertised in this country.”

Lahde said the only reason marijuana remains illegal is because “Corporate America, which owns Congress, would rather sell you Paxil, Zoloft, Xanax and other addictive drugs, than allow you to grow a plant in your home without some of the profits going into their coffers.”

Lahde graduated from Michigan State University with a degree in finance and holds an MBA from the University of California, Los Angeles. He worked at Los Angeles-based hedge fund Dalton Investments LLC before founding his own firm two years ago with about $10 million.

Lahde wasn’t available for comment. A woman at his firm, who asked not to be identified, confirmed the authenticity of the letter.

Thanks to Jesse James Retherford and Duncan Echelson / The Rag Blog