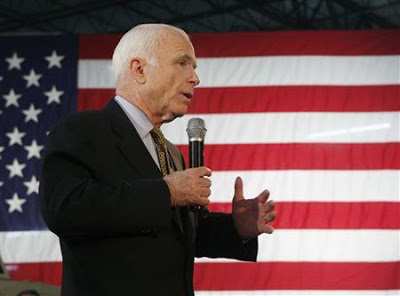 John McCain said last night during a campaign tele-conference that he would bring back a military draft in the United States only in the case of a ‘World War III’ scenario.

Many Americans are fearful the U.S. government will be forced to reinstitute the draft given the prolonged Iraq and Afghanistan wars.
Asked about that possibility by a potential voter in Florida during a telephone “town hall meeting,” McCain said: “I don’t know what would make a draft happen unless we were in an all-out World War III.” …

McCain, a Vietnam veteran, said the draft during that conflict weighed most heavily on lower-income Americans, and that this should not be repeated.

But McCain may be more open to the draft than it seems. During a July 2006 interview on CNN, McCain was asked about the following statement by Newt Gingrich: “We’re in the early stages of what I would describes as the Third World War and, frankly, our bureaucracies aren’t responding fast enough.” Asked whether he agreed, McCain said:

“I do to some extent. I think it’s important to recognize that we have terrorist organizations which — who are dangerous by themselves, are now being supported by radical Islamic governments, i.e., the Iranians, which makes them incredibly more dangerous because they are trained, equipped, motivated and assisted in every way by the Iranians.”

Also, as ThinkProgress noted, “Last October, President Bush himself warned of a coming ‘World War III’ with Iran. ‘I’ve told people that if you’re interested in avoiding World War III,’ said the President. ‘It seems like you ought to be interested in preventing them from have the knowledge necessary to make a nuclear weapon.'”