Hey, It’s Only Money. Yours. 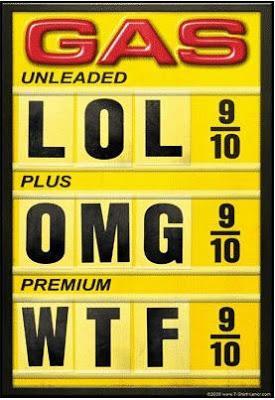 Wow, a lot of people must have bought Hummers last week. How else to explain the spike in oil prices? No, I’m not being silly: They are, and by they I mean the gaggle of media pundits and other administration apologists — abetted by some green zealots — who want to explain our energy crisis by reference to profligate consumers.

Sure, in the long run we consumers, particularly the most wasteful ones who happen to reside in the good old USA, and who have become accustomed to consuming many times our population’s worth of the world’s resources, do need to shape up. But that has little to do with the fivefold rise in the price of oil since George Bush became our president. Yep, he did it; Bush’s deliberate roiling of world politics is the key variable in the run-up of oil prices. No president has been more brilliant in destabilizing the politics of oil-producing countries from Venezuela to Russia and on to the key oil lakes of Iraq and Iran.

This last will go down in our nation’s history as one of the dumbest escapades ever, rivaling even the madness of the Vietnam War. But this time the neoconservatives bet their smart money on oil as the decisive missing ingredient for success. Vietnam was always absurd on its face as an imperial adventure because, as American consumers who check their labels must know, the Vietnamese dominate the market only in the provision of farmed shrimp.

I won’t bother here to dignify the canard that Vietnam, any more than Iraq, ever represented a serious threat to U.S. security, John McCain’s sacrifice in the former war and his apologetics for the current one notwithstanding. After the most ignominious defeat in American history, Communist Vietnam did not have to be fought on the shores of San Diego, as the hawks at that time predicted, but rather went to war with Communist China, the country that had occupied Vietnam for a thousand years. The Vietnamese later made their peace and now compete successfully in the capitalist marketplace without controlling anyone else’s resources.

Something similarly unexpected is likely to occur if we get out of Iraq and permit the people of that region to make their own history. Events upon our departure will follow the vagaries of a historical script centering on religion, ethnicity and nationalism, which the talking heads in media and political circles are united in ignoring. As Iraqi Prime Minister Nouri al-Maliki demonstrated the other day with his third visit to his former safe haven in Iran, the politics of the region have already been sorted out in ways unpredicted by the neocons.

One need only note the words of advice extended to Maliki by Iran’s “supreme leader,” the Ayatollah Ali Khomeini, that the Iraqis must “think of a solution” to free themselves from the U.S. military. Maliki nodded, ever grateful for an audience with the man who holds Iraq’s destiny in his hand, thanks to the Americans’ overthrow of Tehran’s nemesis, Saddam Hussein. As I said, Bush was brilliant.

But to be fair, the administration did finally get something right last week when Defense Secretary Robert Gates fired both the civilian and military chiefs of the Air Force. They were being punished in part for being in charge of an Air Force defense system that lost track of a nuclear-loaded B-52 that flew over the U.S. without anyone in the chain of command aware of its dangerous cargo. Then there was also the matter of ballistic-missile fuses that were erroneously shipped to Taiwan.

The Air Force has been particularly egregious in exploiting the hysteria over 9/11 to commit to hundreds of billions in future spending for high-tech weapons that make no sense with the collapse of the Soviet Union. One issue in the firings was the Air Force’s pushing for hundreds more F-22 fighter jets, a $65-billion program that Gates had concluded was not needed as there has been no role for the existing force in the Afghanistan and Iraq wars. Gates rejected the argument that China, or any other nation, was on the way to providing the F-22 with a worthy opponent. Given his sudden commitment to logic, Gates may not survive long even in this lame-duck administration.

Better get someone in there fast who is content that we taxpayers pay the interest on the loans from China to pay for building up an arsenal to counter weapons that the Chinese show no sign of building. Hey, it’s only money. Yours.

[Robert Scheer is the author, most recently, of “The Pornography of Power: How Defense Hawks Hijacked 9/11 and Weakened America,” to be published this week by Twelve Books.]