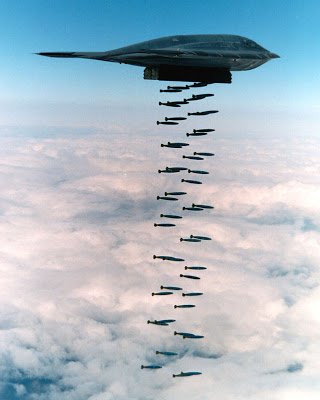 This is exactly why I will never support Hillary Clinton for president, even if she wins the nomination and names Barack Obama as her VP. I support Obama because he offers the possibility for an alternative to American militarism. Clinton has proven over and over that she does not. It is likely that the Bush regime will carry out aerial attacks against Revolutionary Guard bases in Iran before November under the pretext that they are training Iraqi militias. Hillary Clinton will support that attack.

Barack Obama yesterday accused his rival for the Democratic nomination, Hillary Clinton, of adopting the language of the Bush presidency in her approach to dealing with a nuclear Iran.

Ahead of Tuesday’s hotly contested primaries in Indiana and North Carolina, the two Democratic contenders took to competing television networks and levelled at times pointed criticism at each other over foreign policy and the economy.

In the sharpest attack, Obama said that Clinton’s threat to “totally obliterate” Iran should it attempt a nuclear attack on Israel was inappropriate. “It’s not the language we need right now. It’s language that’s reflective of George Bush,” he said.

Obama said it was time to get away from a foreign policy of “bluster and sabre-rattling and tough talk”. He reminded Clinton that she had urged caution in terms of speculating about Iran on the campaign trail “yet a few days before an election she’s willing to use that language”.

Obama’s comments, made on Meet the Press on NBC, were put to Clinton as she appeared simultaneously on ABC’s This Week. She remained unapologetic: “I think we have to be very clear about what we would do. I don’t think it’s time to equivocate. [Iran has] to know they would face massive retaliation. That is the only way to rein them in.”

Asked by George Stephanopoulos, a former aide to Bill Clinton in the White House, whether she had any regrets over her Iran remarks, she replied: “No, why would I have any regrets?”

Clinton has been buoyed by her recent victory in Pennsylvania, and by evidence that white working-class voters are increasingly swinging behind her. An Associated Press survey of exit polls from earlier primaries shows that white voters without a college education favoured her by 64% to Obama’s 34%.

The New York senator has been trying to press home that advantage in Indiana, where polls suggest she has the lead, and in North Carolina, where she is behind but by a narrowing margin. The two states command 187 delegates.

On Saturday Obama added another victory to his tally, though the US territory of Guam had just four delegates riding on it. He won by seven votes.

During his interview with Tim Russert, Obama was quizzed about his relationship with the controversial pastor Jeremiah Wright. Asked why it had taken him so long to disassociate himself from the reverend, Obama said: “What became apparent to me was that he didn’t know me as well as I thought he did, and I certainly didn’t know him as well as I thought I did, and that was disappointing.”

This entry was posted in RagBlog and tagged Hillary, Iran, Military, Presidential Campaign. Bookmark the permalink.