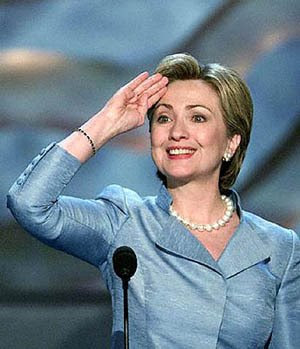 Hillary has crossed the line.

[The following appeared as an editorial in the Boston Globe, Sunday, April 27, 2008.]

Americans have learned to take with a grain of salt much of the rhetoric in a campaign like the current Democratic donnybrook between Hillary Clinton and Barack Obama. Still, there are some red lines that should never be crossed. Clinton did so Tuesday morning, the day of the Pennsylvania primary, when she told ABC’s “Good Morning America” that, if she were president, she would “totally obliterate” Iran if Iran attacked Israel.

This foolish and dangerous threat was muted in domestic media coverage. But it reverberated in headlines around the world.

Responding with understatement to a question in the British House of Lords, the foreign minister responsible for Asia, Lord Mark Malloch-Brown, said of Clinton’s implication of a mushroom cloud over Iran: “While it is reasonable to warn Iran of the consequences of it continuing to develop nuclear weapons and what those real consequences bring to its security, it is probably not prudent in today’s world to threaten to obliterate any other country and in many cases civilians resident in such a country.”

A less restrained reaction came from an editorial in the Saudi-based paper Arab News. Being neighbors of Iran, the Saudis and the other Gulf Arabs have the most to fear from Iran’s nuclear program and its drive to become the dominant power in the Gulf.

But precisely because they are most at risk from Iran’s regional ambitions, the Saudis want a carefully considered American approach to Iran, one that balances firmness and diplomatic engagement.

The Saudi paper called Clinton’s nuclear threat “the foreign politics of the madhouse,” saying, “it demonstrates the same doltish ignorance that has distinguished Bush’s foreign relations.”

The Saudis are not always sound advisers on American foreign policy. But they understand that Rambo rhetoric like Clinton’s only plays into the hands of Iranian hard-liners who want to plow ahead with efforts to attain a nuclear weapons capability. They argue that Iran must have that capability in order to deter the United States from doing what Clinton threatened to do.

While Clinton has hammered Obama for supporting military strikes in Pakistan, her comments on Iran are much more far-reaching. She seems not to realize that she undermined Iranian reformists and pragmatists. The Iranian people have been more favorable to America than any other in the Gulf region or the Middle East.

A presidential candidate who lightly commits to obliterating Iran – and, presumably, all the children, parents, and grandparents in Iran – should not be answering the White House phone at any time of day or night.