Home of the Brave: We Should All Be Ashamed 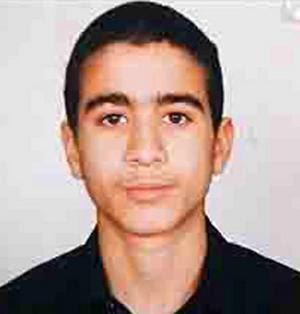 President Bush, Vice President Dick Cheney, and the rest of the warmongers and terror-pimps in the White House would have us believe that Omar Khadr is a monster. Khadr is the 21-year-old Canadian who is facing one of the first show-trials at Guantanamo.

But let’s just step back a minute and consider Mr. Khadr’s case.
The son of an alleged Islamic fundamentalist, Khadr was sent to one of those fundamentalist madrassa schools in Pakistan back when he was 14. From there, he went to Afghanistan, to join with the Taliban in fighting against the remnant warlord backers of the Soviet Union, which had attempted to run Afghanistan as a vassal state.

Then came 9-11 and the October 2001 US invasion of Afghanistan. Young Khadr suddenly found himself fighting against the world’s most powerful military.

In this situation, with some 20,000 US and European troops battling across Afghanistan, Khadr, by then at the ripe age of 15, found himself with a group of five older fighters in a compound up in the hills. Some US Special Forces came on the location, and, peeking through cracks in the door, saw the group, armed with AK rifles. They called on the men to surrender, but the men allegedly refused.

At that point the brave Americans called in an air strike, and clobbered the building. After that softening up, they went inside to pick up the pieces.

Someone at that point, and US military prosecutors claim it was the wounded Khadr, tossed a grenade while lying injured on the ground. The grenade killed Special Forces Sergeant Christopher Speer. Speer’s comrades opened fire, with three of them hitting Khadr.

When they went to check on him, the critically injured, yet miraculously still living Khadr reportedly pleaded, “Shoot me!” Reportedly, some of Sgt. Speer’s buddies were ready to do just that. Apparently the “clicking” of injured captives by American forces (a war crime) is not uncommon, and even has its own slang word. But a medic with the group interceded and stopped the battlefield execution, and took action to save Khadr’s life.

Khadr was eventually shipped off to Guantanamo, at the age of 15, in violation of a 2002 protocol signed by the US which extended the protection of the Geneva Conventions against imprisoning child soldiers from the prior “under 15” standard to “under 18.” No matter, “bad guy” Khadr would be one of at least 2500 children that the US has admitted to incarcerating in Iraq, Afghanistan, Guantanamo and elsewhere as “enemy combatants.”

Today, Khadr is 21. He has spent the second half of his teenage years confined in a prison camp on the naval base at Guantanamo.

This is what Bush and Cheney are really referring to when they assure us that they are holding “the worst of the worst” on the island of Cuba.

They are keeping us safe from 15-year-old boys.

And what, exactly, is Omar Khadr’s “crime”?

As far as I can tell, if he did toss that grenade (and there is testimony from American witnesses that the thrower may have been another man, who was killed in the resulting US barrage of fire), Khadr was simply demonstrating extraordinary bravery of the kind that would earn a silver star, at least, had it been a US soldier or marine doing the same thing under the same circumstances. Consider: he and his comrades-in-arms, battling in defense of their religion and, in some cases, their nation, were bombarded from the air. They were then approached by armed US troops—the very ones who had called in the air strike. This was a battle, and it was not over yet. For all Khadr knew, those US soldiers were going to kill them all. And in any event, Khadr and his fellow fighters had a right to defend themselves to the death to prevent capture. Sure it’s unfortunate that Sgt. Speer was killed, but that’s what happens in wars.

Still, a fighter killing another fighter during warfare is not the act of a “terrorist.” It may be brutal and it may be tragic, but it is the act of a soldier. That soldier, if captured, is not a criminal, but a POW. Moreover, if he is a child, the Geneva Conventions and the subsequent protocol mentioned above, require that he be treated not as a POW but as a victim of war.

Bush and Cheney don’t want to admit that the people fighting US forces in Afghanistan are legitimate soldiers, entitled to protection under the rules of war. They want us to believe that anyone who takes up a gun in defense of their homeland or of the homeland of their allies, and fights against the US military forces that are spread all over the globe like Roman Legions of old, are “terrorists,” deserving of whatever fate we hand them, by whatever rules we want to gin up.

But it’s worth remembering that this particular “terrorist,” at the time of his “crime,” was simply a scared and badly-wounded 15-year-old kid who had the balls to toss a grenade at well-armed soldiers on a search-and-destroy mission.

In an interesting twist that further highlights the absurdity of calling a 15-year-old a hardened terrorist, Speer’s widow, Tabitha, and another soldier who lost an eye in the grenade blast, sued not Khadr, but his father’s estate, claiming that his “failure to control his son” had been the proximate cause of their losses. A federal district judge, in February 2006, awarded the two $102.6 million in damages. In other words, the court concluded Khadr wasn’t responsible for his actions; his father was. And yet the US is prosecuting Omar Khadr for being a hardened terrorist at an age when he was too young to drive!

The Bush/Cheney administration’s incarceration and prosecution of this boy was a war crime. His continued incarceration and the attempt to prosecute him as a terrorist today makes a mockery of America’s motto: Home of the Brave.

We should all be ashamed.

DAVE LINDORFF is a Philadelphia-based journalist and columnist. His latest book is “The Case for Impeachment (St. Martin’s Press, 2006 and now available in paperback). His work is available at http://www.thiscantbehappening.net/.

This entry was posted in RagBlog and tagged Criminal Justice, Guantanamo, Terrorism. Bookmark the permalink.