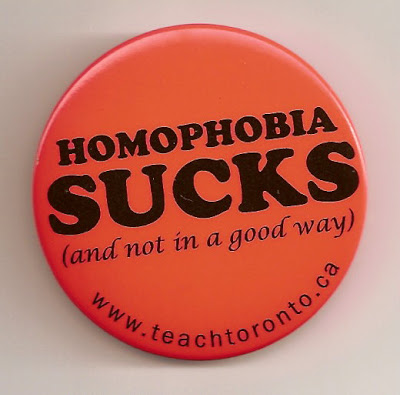 Button: Rainbow Youth Niagra.
‘That complete strangers could be so unequivocally united in their homophobia was a chilling reminder that hatred of queers is not quarantined to one community.’
By Luna M. Yasui

On Nov. 5, I awoke to the uncomfortable realization that more Californians had voted to protect the living conditions of chickens than to preserve my civil rights. Chickens deserve a good life; they bring exquisite joy when fried up and served with a side of biscuits. I may not be as delicious, but why hate?

My bittersweet post-Election Day was foreshadowed by this street corner exchange near my polling site: on Election Day, I joined a few young queer women of color in handing out No on 8 flyers at my polling place. (Yes, I was a safe, non-electioneering 100 feet from the polls.) A construction crew of men approached two of the women and informed them that in order to protect their children, they had voted yes on 8. The posse of men then sat on a stoop to enjoy their sandwiches and entertained themselves by tossing homophobic slurs our way. Soon after, we were brushed back from the curb by a roaring SUV, full of venomous, epithet-screaming young men. The construction crew joined the jeering. Men of color in worn work boots and doo-rags echoed the hate spewed by the SUV-riding white men in baseball caps and polo shirts. Homophobia the great unifier, bridges fashion and racial divides.

It was just one incident, but my hopes died somewhere in that convergence of vitriol. That complete strangers could be so unequivocally united in their homophobia was a chilling reminder that hatred of queers is not quarantined to one community.

Yet, that was not the post-Election Day message, for every failed campaign must find a scapegoat. I wanted to revel in the promise of a New Day full of Hope and Change, but instead was confronted with the tired old Blame Black People mantra. “Seventy percent of African Americans voted Yes on 8!” went the indignant assertions by the liberal and not so liberal media. Culled from one exit poll of 2,240 voters, this “finding” was based on the responses of a mere 224 African American voters. Some 224 people speak for the entire African American electorate in California? The poll only included 90 African American men — too few to produce any statistics.

I’ve also heard a few Asian Americans attempting to claim Moral Model Minority status based on our purported majority opposition to Proposition 8. To them, a few words of caution: always be wary of polls that lump all Asian Americans together. Some 134 “Asians” polled represent the ever-mythical unified Asian America? As the most ethnically and linguistically diverse racial group in the United States, we are rarely, if ever, one blended happy South Asian-Filipino-Chinese-Japanese-Tongan-Samoan-Vietnamese-American family. Talk to your parents, aunts, uncles or born-again cousin about queerness lately? Catch the hundreds of Yes on 8 Chinese Christians rallying in Portsmouth Square Park? There’s a lot of in-house work to do.

Every community has its homophobes — even in San Francisco 24 percent of the voters approved of Prop. 8. That’s right, 1 in 4 residents of the purported “Gay Mecca” voted to discriminate against gays and lesbians.

A majority of California voters decided to write discrimination into the state constitution. If questionable exit polls tell us anything, it is that homophobia is everywhere. It is not confined to a single race, religion or county. So let’s quit the blame game and start confronting the hate and homophobia embedded in each of our lives. Then, maybe next time California votes on my rights, I’ll fare as well as the chickens.

[For more than a decade, Luna Yasui has worked as an attorney and organizer on behalf of low-wage immigrant workers, communities of color, and the lesbian, gay, bisexual and transgender community. The views expressed in the preceding commentary are not necessarily those of the Nichi Bei Times. The Nichi Bei Times is a Japanese American news weekly.]