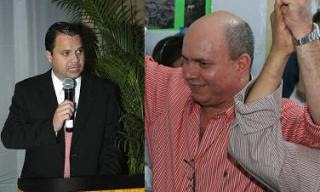 The Oligarch Diaspora shouts, again and again, in its flailing attempt to convince the Honduran people and the world that its coup d’etat was somehow legitimate, “we want democracy!”

Well, here’s a powerful example of the kind of “democracy” they apparently want.

In November of 2008, the voters of San Pedro Sula – with a population of one million, it’s the second largest city in Honduras — elected Mayor Rodolfo Padilla Sunseri (right, in the photo above) to be their Liberal Party candidate for mayor, with 63 percent of the vote.

Another candidate in that contest — William Hall Micheletti (left, in the photo above, and doesn’t that last name sound familiar?) — garnered just 16 percent, coming in third.

Padilla went on to win the mayoralty.

But when your uncle Roberto Micheletti is the newly installed dictator of your country, coming in third is good enough!

At 11 a.m. this morning, workers and citizens in and near San Pedro Sula City Hall heard gunshots and explosions, while riot police attacked a crowd that was demonstrating outside against the coup. More than 50 citizens were reportedly arrested. And nobody has seen Mayor Padilla ever since.

So who is now “mayor” of the city? Telesur reports: the coup “president’s” nephew, William Hall Micheletti.

Ain’t their version of “democracy” grand?