Honduras : Talks Ramp Up as Repression Gets Bloody 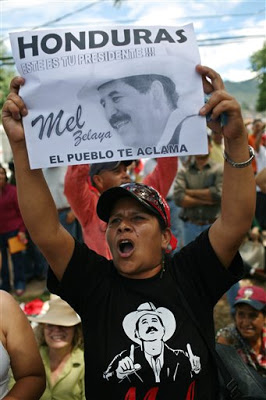 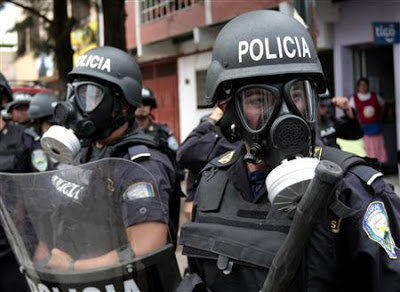 See ‘Zelaya stakes out his position’ by Arturo Cano, and late-breaking story on new media crackdown, Below.

As determined protests and bloody repression continue in the streets outside, representatives of deposed Honduran President Manuel Zelaya and the de facto government led by Roberto Micheletti have been meeting with Latin American diplomats in a hotel in Tegucigalpa since October 7 in an effort to resolve the crisis the country has been living through since June 28.

Optimists say the talks, sponsored by the Organization of American States, are already producing results, but skeptics counter that the coup government will never budge from its hidden agenda of stalling until the November elections which, the golpistas hope, will restore legitimacy to the Honduran government and will spell defeat for those struggling for change.

Journalist Arturo Cano wrote the following from Tegucigalpa where he is covering the crisis for the Mexican daily newspaper La Jornada.

Zelaya stakes out his position:
A return to power before the 15th or no elections

Micheletti warns that nothing short of an invasion will prevent November 29 vote while Insulza says the basis of dialogue must include all provisions of San José Accord.

TEGUCIGALPA, Honduras — Luz Ernestina Mejía, Miss Honduras of 1980, former Partido Liberal congresswoman and an organizer of the “white marches” against the reinstatement of Manuel Zelaya to the presidency, is furious with the foreign ministers.

“Why should we approve of Zelaya’s capricious return to power through legal means? No restitution, no tercería (a third person in the presidency), nothing. I am a radical,” she says.

“So what is this dialogue for?” she asks. “They (the zelayistas) are lucky I’m not one of the negotiators.”

But they are not that lucky: hours later, when presented with arguments by diplomatic representatives of several countries, the de facto president becomes exasperated and says he’s been tricked.

“We thought you had come in good faith to tell us you accept a Honduran solution, but the speeches you have made are totally different. They say we have to return Mr. Zelaya to power,” Micheletti thunders, although, in truth, he is not as radical as Miss Honduras.

He does accept a third person in the presidency. “I will step aside but this gentleman who has done so much harm to the economy and to Honduras must also step aside.”

Micheletti gives a report on his government, chastizes the ministers for their deafness and waxes apocalyptic. “The elections will be held on November 29! Only if we are attacked and invaded will they not be held!”

’Not a single death,’ he presumes to claim

He takes pleasure in his verbal retaliation: “You neither know the whole truth nor at times do you want to hear the whole truth.” And Micheletti’s truth is that “there has not been a single death at the hands of the army or the police,” there has not been a state of siege, but merely the suspension of “some” rights and the closing down of two media, thanks to which acts “the population has experienced the most peaceful of days.”

And in passing, Micheletti informs José Miguel Insulza, secretary general of the Organization of American States, the foreign ministers of six countries and several other diplomatic representatives, of the cost of feeding Manuel Zelaya’s horse and of his groom’s salary.

In the morning, Insulza had stated the OAS position: the Honduran dialogue should have as a basis “all the points” of the San José Accord, proposed more than two months ago by Óscar Arias. One of those points is Zelaya’s restitution to office. Insulza adds to that the formation of a “national unity” government and Zelaya’s renouncing any act leading to the rewriting of the constitution.

A couple of days ago, Micheletti let slip a mention of the possibility of reinstating the president. Now, with the ministers as a captive audience, he returns to the position he had held since the coup d’état.

“To continue in a situation like this one, in which President Zelaya is not reinstated, poses a considerable risk that the results of the election will not be recognized,” says Rodolfo Gil, Argentine representative to the OAS.

The remaining representatives are less direct, so the Brazilian is the only one Micheletti interrupts. He greets the Mexican foreign minister, Patricia Espinosa, with a kiss. 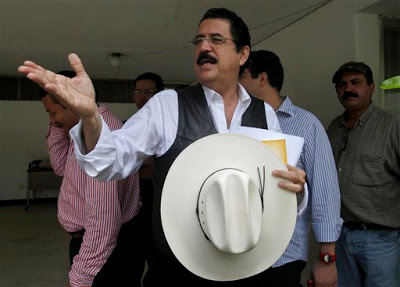 Honduras’ ousted President Manuel Zelaya gestures after a meeting with negotiators at the Brazilian embassy in Tegucigalpa, Wednesday, Oct. 7, 2009. Photo by Esteban Felix / AP.
One day in office and ‘he’ll twist it all around’

“Treat me right because I’m going to be interior minister again,” Víctor Meza would say in the first days of August, when he was predicting “good news soon.” Two months later, Meza heads a group of three who represent Zelaya in the talks with the de facto government. So the “good news” never came.

Only Zelaya’s secret return to his country on Monday, September 21, turned the situation around and made the international community tighten some screws, particularly one manufactured in Brazil, and brought about this day: the first day that union leader Juan Barahona is not in a march but in a great hall with carpets and chandeliers, a proletarian in a sea of suits, in blue jeans and his baseball cap. And to be sure, Barahona and Zelaya’s Labor Minister Mayra Mejía are left alone on the left of the first row; none of the businessmen or politicians, unanimous in their support of the coup, wants to sit next to them.

First to speak at the opening ceremony of the dialogue is José Miguel Insulza, who brings to the table the San José Accord and asks the participants to negotiate “their hidden intentions.” When he finishes, the businessmen, the hard-line of the coup, respond with a timid boo.

“Once again they’ve come to impose their agenda, their formula,” says businessman Santiago Ruiz, one of those who booed and one of those convinced that Zelaya should never be reinstated. “One day in office and he’ll twist it all around.”

Zelaya began the day with a statement on the radio: “We warn you that if the president is not returned to office before October 15, then automatically, for lack of validity, credibility and the confidence of the national and international communities, the electoral calendar will be null and void until the San José Accord is signed and the president is reinstated.”

The elections are the battle horse of the de facto government, the political parties, the businessmen, the “civil society” marching in their white t-shirts, and the churches.

They don’t want a dialogue, they want to stall until the elections which, to their way of thinking, will magically make the world’s governments recognize that there was a “presidential succession” and not a coup d’état.

’Hypocritical maneuvering’ will be exposed

“President Zelaya will be back in the capitol this month, the president will return to the office to which he was elected,” says Víctor Meza shortly after his presentation to the international delegation and before his closed meeting with the de facto government’s negotiators.

In his speech Meza apologizes for being late, which resulted from Zelaya’s representatives not being allowed to see the president in the Brazilian embassy until eight o’clock this morning.

Shortly before the assembly was convened, perhaps in order to present the OAS mission with a luxurious reception, the police broke up a zelayista demonstration at the United States Embassy. They then also attacked groups of students demonstrating at the National University.

Meza denounces these actions and forsees a scenario that the zelayistas consider likely:

“This dialogue has virtues and possibilities and when we understand it as a medium for calculated retreats and tactical delays, the dialogue has the advantage of exposing that hypocritical maneuvering.”

Leaving stridency aside, Meza calls for a speedy exit from the “dark tunnel” Honduras has entered after “allowing the barbaric to overcome the civilized.”

Interestingly, some of the public, including some among the press, applaud him.

Honduras’s government has imposed a new law limiting media freedoms in the country, amid a political standoff between Roberto Micheletti, the de facto leader, and Manuel Zelaya, the deposed president.

Talks between the rival factions entered a three-day pause on Saturday, prolonging uncertainty over a possible resolution to the almost four-month old crisis.

The new legislation gives Micheletti’s government the power to close down radio and television stations that incite “social anarchy” or “national hatred”.

Oscar Matute, the interior minister, denied the measures amounted to controlling the media, saying the government was was applying rules allowed under international law.

“It doesn’t represent any kind of control of the media,” he was quoted by the Reuters news agency as saying.

“No journalist, no media outlet, can act as an apologist for hatred and violence in society.”

The government has not fulfilled an earlier promise to lift emergency measures that closed Radio Globo and Canal 36 last month, which had supported Zelaya.

The two stations were among the only media in Honduras that reported on the protests in favour of restoring Zelaya to power.

Michelletti’s government accused the stations of encouraging vandalism and insurrection for announcing demonstrations.

Honduras has experienced near daily protests since the military-backed coup in June, which came after Zelaya pressed ahead with plans for a referendum on changing the constitution despite a Supreme Court order ruling the vote illegal.

The interim government accuses Zelaya of trying to amend the constitution to annul one-term presidential limit.

Since sneaking back into Honduras late last month, Zelaya has been taking refuge, with dozens of supporters, in the Brazilian Embassy in Tegucigalpa, the Honduran capital.

The international community has been pressuring the interim government to allow Zelaya’s return to power ahead of the November 29 presidential election, which was scheduled before the coup.

Representatives from the rival factions said that recent face-to-face talks have yielded agreement on 60 per cent of the issues under an international plan to resolve the crisis.

But Juan Barahona, Zelaya’s negotiator, said no agreement had been reached on the fundamental issue of whether the ousted leader could return to serve out the remaining months of his term.

They planned to discuss the issues within their own factions over the three-day pause and resume negotiations on Tuesday, two days before the October 15 deadline given by the Zelaya camp for his unconditional restitution.