Honour Killings in Basra, Iraq Are on the Rise 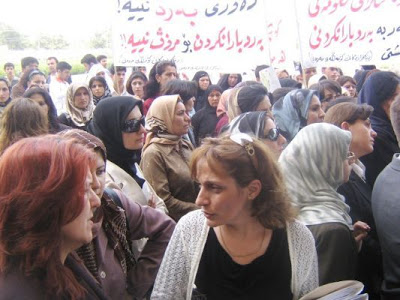 Authorities in the southern Iraqi city of Basra have admitted they are powerless to prevent ‘honour killings’ in the city following a 70 per cent increase in religious murders during the past year.

There has been no improvement in conviction rates for these killings. So far this year, 81 women in the city have been murdered for allegedly bringing shame on their families. Only five people have been convicted.

During 2007 the Basra security committee recorded 47 ‘honour killings’ and three convictions. One lawyer in the city described how police were actively protecting perpetrators and said that a woman in Basra could now be murdered by hired hitmen for as little as $100 (£65).

The figures come despite international outrage which followed The Observer’s coverage of the death of 17-year-old Rand Abdel-Qader, who was murdered by her father last April in an ‘honour killing’ after falling in love with a British soldier in Basra. The 4,000 British troops stationed in the city since the invasion that toppled Saddam Hussein in 2003 withdrew to the airport last September.

Rand Abdel-Qader was killed after her family discovered that she had formed a friendship with a 22-year-old infantryman whom she knew as Paul. She was suffocated by her father then hacked at with a knife. Abdel-Qader Ali was subsequently arrested and released without charge.

Rand’s mother, Leila Hussein, who divorced her husband after the killing, went into hiding but was tracked down weeks later and assassinated by an unknown gunman. Her husband had told The Observer that police had congratulated him for killing his daughter.

Seven months after the murders, the problem of these killings in Basra has become worse, according to lawyers. Ali Azize Raja’a, an Iraqi prosecutor who has represented the victims of 32 ‘honour killings’ since 2004, said that, despite accumulating sufficient evidence to prove who was responsible in each murder, he had won only one case.

He said that the greatest issue was the decision by police to release suspects. Seven in 10 of those thought to be responsible for such a killing have left the city, with little attempt made to track them down.

The father of Rand is also understood to have left Basra. He was held by police in connection with his daughter’s murder for only two hours. A local businessman who described the actions of Rand’s father as ‘courageous’ is believed to have given a considerable sum of money to him and his two sons, who disowned their mother after she objected to Rand’s killing. Raja’a said that when he was approached by Leila over Rand’s case, his family was threatened by relatives.

Another Iraqi lawyer, who requested anonymity, said that some fathers had started to hire professional hitmen to carry out ‘honour killings’ which were then covered as ‘sectarian murders’. He said: ‘The life of these women isn’t higher than $100. You can find a killer standing in any coffee shop of Basra, discussing prices of a life as if he was buying a piece of meat.’

Mariam Ayub Sattar, an activist in Basra, said that any woman caught speaking to a man in public who was not her husband or a relative was considered a prostitute and punished. A fortnight ago three women were burned with acid while walking through a market in Basra after stopping to speak to a male friend, Sattar said.

Nine of the 12 voluntary organisations helping women in Basra have closed down since the US-led invasion.

The Women’s Rights Association in Basra was forced to close down after death threats were made following the murder of Rand’s mother last May. Two women from a voluntary organisation who had been helping her to hide from her husband were also injured.

Alia’a Obeidi, the organisation’s president, said that one of her colleagues was killed while driving to work and, fearing for her family’s safety, she later moved to the Kurdish region in northern Iraq.

The Iraqi Ministry of Human Rights said that it was working on new projects to end gender discrimination in the country. ‘We try to make a difference by teaching students at schools about gender equality, but it only will be possible when parents don’t teach the opposite at home,’ said Hameed Walled, senior official in the Ministry of Human Rights.

This entry was posted in RagBlog and tagged Criminal Justice, Iraq, Women. Bookmark the permalink.