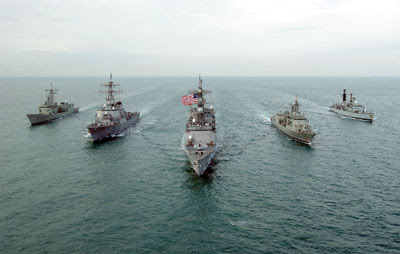 A US House of Representatives Resolution effectively requiring a naval blockade on Iran seems fast tracked for passage, gaining co-sponsors at a remarkable speed, but experts say the measures called for in the resolutions amount to an act of war.

H.CON.RES 362 calls on the president to stop all shipments of refined petroleum products from reaching Iran. It also “demands” that the President impose “stringent inspection requirements on all persons, vehicles, ships, planes, trains and cargo entering or departing Iran.”

Analysts say that this would require a US naval blockade in the Strait of Hormuz.

Since its introduction three weeks ago, the resolution has attracted 146 cosponsors. Forty-three members added their names to the bill in the past two days.

In the Senate, a sister resolution S.RES 580 has gained co-sponsors with similar speed. The Senate measure was introduced by Indiana Democrat Evan Bayh on June 2. In little more than a week’s time, it has accrued 19 co-sponsors.

Congressional insiders credit America’s powerful pro-Israel lobby for the rapid endorsement of the bills. The American Israel Public Affairs Committee (AIPAC) held its annual policy conference June 2-4, in which it sent thousands of members to Capitol Hill to push for tougher measures against Iran. On its website, AIPAC endorses the resolutions as a way to ”Stop Irans Nuclear Proliferation” and tells readers to lobby Congress to pass the bill.

AIPAC has been ramping up the rhetoric against Iran over the last 3 years delivering 9 issue memos to Congress in 2006, 17 in 2007 and in the first five months of 2008 has delivered no less than 11 issue memos to the Congress and Senate predominantly warning of Irans nuclear weapons involvement and support for terrorism.

The Resolutions put forward in the House and the Senate bear a resounding similarity to AIPAC analysis and Issue Memos in both its analysis and proposals even down to its individual components.

Proponents say the resolutions advocate constructive steps toward reducing the threat posed by Iran. “It is my hope that…this Congress will urge this and future administrations to lead the world in economically isolating Iran in real and substantial ways,” said Congressman Mike Pence(R-IN), who is the original cosponsor of the House resolution along with Gary Ackerman (D-NY), Chairman of the sub committee on Middle East and South Asia of the Foreign Affairs Committee.

Foreign policy analysts worry that such unilateral sanctions make it harder for the US to win the cooperation of the international community on a more effective multilateral effort. In his online blog, Senior Fellow in the Middle East Program at the Center for Strategic and International Studies Ethan Chorin points out that some US allies seek the economic ties to Iran that these resolutions ban. “The Swiss have recently signed an MOU with Iran on gas imports; the Omanis are close to a firm deal (also) on gas imports from Iran; a limited-services joint Iranian-European bank just opened a branch on Kish Island,” he writes.

These resolutions could severely escalate US-Iran tensions, experts say. Recalling the perception of the naval blockade of Cuba during the Cuban Missile Crisis, and the international norms classifying a naval blockade an act of war, critics argue endorsement of these bills would signal US intentions of war with Iran.

Last week’s sharp rise in the cost of oil following Israeli Deputy Prime Minister Shaul Mofaz’s threat to attack Iran indicated the impact that global fear of military action against Iran can have on the world petroleum market. It remains unclear if extensive congressional endorsement of these measures could have a similar effect.

In late May, Israeli Prime Minister Ehud Olmert reportedly urged the United States to impose a blockade on Iran. During a meeting with House Speaker Nancy Pelosi (D-CA) in Jersusalem, Olmert said economic sanctions have “exhausted themselves” and called a blockade a “good possibility.”

The U.S. House of Representatives is considering a new resolution that could effectively demand a blockade against Iran — an act that would be widely seen as an act of war and could invite Iranian retaliation, possibly leading us into a shooting war.

Over the last three weeks, 77 House Democrats and 92 Republicans have agreed to cosponsor this resolution, but we think many do not realize its dangerous implications.

This resolution (H. Con. Res. 362) was introduced by Representative Gary Ackerman. The most alarming provision “demands that the President initiate an international effort to immediately and dramatically increase the economic, political, and diplomatic pressure on Iran to verifiably suspend its nuclear enrichment activities by, inter alia, prohibiting the export to Iran of all refined petroleum products; imposing stringent inspection requirements on all persons, vehicles, ships, planes, trains, and cargo entering or departing Iran; and prohibiting the international movement of all Iranian officials not involved in negotiating the suspension of Iran’s nuclear program.”

Such a blockade imposed without United Nations authority (which the resolution does not call for) would be seen as an act of war. Congressional sources say the bill might first go to committee, which gives us a little more time to pressure our representatives. But whether or not it goes first to committee, or directly to the floor of the House, action on H. Con. Res. 362 is needed now. We urge you to ask your representative not to support this dangerous step toward war with Iran.

Congressional leaders seem to have assumed that there would be little opposition to this punitive measure against Iran, and they have put it on a fast track to passage. But due to the threat of war, many organizations and reasonable members of Congress are working overtime to stop this bill.

Please take action now — ask your representative to oppose this dangerous path that could lead directly to war with Iran.

You can find the full text of the resolution and list of co-sponsors
here.

Source. / United for Peace and Justice

This entry was posted in RagBlog and tagged Congress, Department of Defense, Iran, Naval Blockade, Social Action. Bookmark the permalink.