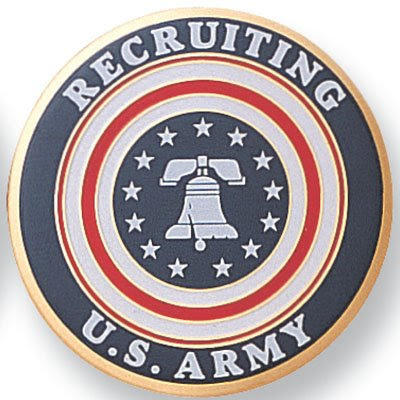 A story involving an Army recruiter in Texas last week has led to a bipartisan call for an investigation. The recruiter from the Greenspoint Recruiting Station in Houston was suspended after a recording of his threats aired on a local TV station. The recruiter, Sgt. Glenn Marquette, warned eighteen-year-old Irving Gonzales that he would be sent to jail if he decided to go to college instead of joining the military, even though Gonzales had signed a non-binding contract that left him free to change his mind before basic training.

HOUSTON — With a war in Iraq and fighting on the rise in Afghanistan, the struggle to bring in new U.S. Army recruits is heating up again.

And Irving Gonzales, 18, got caught up in it all.

As his family’s oldest male, he feels he has to do whatever it takes to help out his single mom. For him, that means working long hours at his after-school job.
“My mom was left struggling. I would give her more than half my paycheck,” Gonzales said.

That’s why the Aldine High School senior started thinking about the Army – and the tens of thousands of dollars in bonuses that can come with enlistment.

So Gonzales signed up – but only to “pre-enlist” in the Delayed Entry Program. DEP allows kids to try out the military without a binding commitment.

But the 11 News Defenders have found there is a problem: Army recruiters aren’t sticking to the program and are bullying and even lying to potential recruits and their families to keep them from dropping out.

After he had a change of heart, Gonzalez became one such victim.

“I’d rather just stay here, go to college,” he said he told his recruiter.

The reaction: Gonzalez said a recruiter told him if he did drop out, they would send him to jail.

Marquette told Gonzales there was no way out.

“You signed a binding contract,” he said.

But that wasn’t true.

Army recruiting regulations say delayed entry members can leave any time. They specifically mention “under no circumstances will any (recruiter) threaten, coerce, manipulate, or intimidate (future soldiers), nor may they obstruct separation requests.”

Further, they state: “At no time will any (recruiter) tell a (Delayed Entry Program) member he or she must go in the Army or he or she will go to jail.”

But when Gonzales asked Marquette what would happen if he just didn’t show up for service, a phone recording captured this reply:

“Then guess what?” said Marquette. “You’re AWOL. Absent without leave. You want to go to school? You will not get no loans, because all college loans are federal and government loans. So you’ll be black barred from that. As soon as you get pulled over for a speeding ticket, they’re gonna see you’re a deserter, they’re going to apprehend you, take you to jail.”

Marquette continued: “So guess what? All that lovey-dovey ‘I wanna go to college’ and all that? Guess what? You just threw it out the window, because you just screwed your life.”

Eric Martinez, 17, is another young recruit who changed his mind.

“They make it seem there’s no way out,” his mother said.

Martinez said the nearby National Cemetery constantly reminds him – and his mother – of the risks and horrors of war.

“She tells me about the stories that happen in Iraq. Some people kill themselves or get shot,” Martinez said.

But when Martinez told that to the recruiter the Army assigned to him, he said he too was threatened.

Then his mother decided to intervene. But when she spoke to the Greenspoint Recruiting Station, they told her, too, that Martinez would be AWOL and go to jail if he didn’t show up for service.

This isn’t the first time the 11 News Defenders have found these sorts of problems — and at the VERY SAME recruiting station location.

Three years ago in May of 2005, we found that another recruiter from that station, a Sgt. Thomas Kelt, had left this phone message to a high school student. This time the issue was simply keeping an appointment to talk:

“By federal law you got an appointment with me at two this afternoon at Greenspoint Mall,” Kelt told him. “OK? You fail to appear and we’ll have a warrant, OK? So give me a call back.”

Our investigation into that call led to the Army announcing a national stand-down so all of its recruiters could re-examine their methods and regulations.

But just two months later, 11 News found that instead of punishing Sgt. Kelt, the Army had promoted him to the role of station commander at a neighboring recruiting station. That meant he would supervise and train other recruiters on how to do the job.

(And today? the Army confirms Sgt. Kelt still holds that supervisory position, but has since been transferred out of Texas.)

So we caught up with Sgt. Marquette to ask about these latest incidents.

11 News: “I just want to know why you’re telling young recruits they’ll go to jail if they want out of the Delayed Entry Program.”

Marquette: “What are you talking about?”

Marquette: “I’m on vacation right now. I really don’t want to be bothered!”

Congressman Ted Poe believes there is an ongoing problem with recruiters.

Poe speaks from the position of a veteran himself who recently visited Iraq with the Army.

We shared with him new figures 11 News obtained from the U.S. Army that track how recruiters have been doing since our story three years ago.

Turns out, instead of going down, allegations of wrongdoing are actually going up. In 2005, 836 complaints were filed against recruiters. That rose to 874 last year, and the Army is on pace to surpass that figure in 2008.

What’s more? The number of Army recruiters given formal admonishments has nearly doubled since our first report, with 373 citations in 2005 growing to 635 in 2007.

One possible reason for this trend?

But despite years of recommendations from the GAO, the Army has not changed its ways.

And why would this matter? Take a look at another part of what Sgt. Marquette advised potential recruit Irving Gonzales on what to do if he didn’t want to join the Army anymore:

Gonzales: “That would be the right way to do it?”

Marquette: “Yeah and guess what? If you do it that way? Maybe in the future you may say well (darn), I’m coming to join the Army. Then guess what? You can. You can join the Army. Cuz you got out of the Army the right way. You at least got to go to basic training and try it.”

Gonzales: “I mean that’s the only way? I can’t do it right here?”

The problem? U.S. Army spokesman Douglas Smith says once you report to basic training, you are a full-fledged soldier. While Smith made clear he can’t comment on Marquette’s specific situation due to an ongoing investigation of the matter, he said in general, “Once you report to basic training it is harder to get out of the Army than if you ask for separation before enlisting.”

“It costs taxpayers money,” Poe said. “And we certainly don’t want people to fake an injury or whatever in boot camp just because the recruiter suggested they do that to get out of the Army permanently.”

But in a written statement to KHOU, the Army’s Smith confirmed:

Smith notes the Army does now award some extra incentive points to recruiters when a future soldier completes basic training.

“This change was not like the Marine Corps system, which took away all the recruiter’s credit if the recruit did not make it through basic training,” said Brenda Farrell, director of the GAO’s section that oversees and investigates military matters for Congress. “The Army’s new system just awarded “extra” points.”

And the Army confirms in a written statement that its recruiters still “lose points for those recruits that do not ship to (basic training)… Recruiting personnel are also penalized under the Recruiter Incentive Pay. Recruiting personnel must not exceed the command’s loss rate in order to maintain their monetary incentive.”

This, said Poe, creates a conflict of interest for Army recruiters that encourages them to do whatever it takes to get a recruit to ship to basic training.

“The Marines, in my opinion, have it right,” the Congressman said. “If we could make all the military branches not count a recruit as a recruit until they finish boot camp, then you’re not gonna have the problem.”

But the Army’s Douglas Smith says that currently, “We have no plan to adopt the U.S. Marine Corps model.”

Still, Smith says, “Recruiters should not threaten applicants or Future Soldiers. That violates our regulations.”

He made it clear he was speaking in general, and not about Marquette.

“Our country cannot deceive its citizens,” Poe said. “Since the Army hasn’t taken the initiative, now Congress may have to get involved.”

Poe also said the contract itself to join the Delayed Entry Program is misleading to potential recruits and needs to be rewritten by the Pentagon.

He said it makes it appear as if members really do have to join the Army or face jail, when it’s simply not true.

In the meantime, the U.S. Army says it has launched an investigation into the allegations against Sgt. Glenn Marquette:

“The recruiter against whom the allegations were made has been taken off recruiting duty pending the outcome of the investigation,” the Army said.

And one final fact: The Army confirms they are also at historic lows in the Delayed Entry Program, but deny that that has had any effect on any alleged recruiter behavior.