Hah, hah …. Who is Ted Poe trying to kid? Living in Amerikkka is one gigantic deception, dude !!! Just where do you think you’ve been all your life? 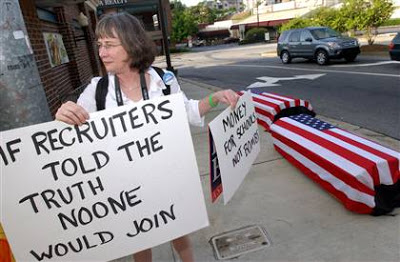 It was like an action movie. A young man held at night in a hotel, threatened with prison. He is to be shipped off to war in the morning. His friends desperately trying to find him. The “down” button on the elevator had been disabled. He considered jumping from the window. When his friends arrive, they encounter military personnel patrolling the grounds. One sneaks in, gets his friend out, and they drive off into the night. This was real life for 17-year-old Eric Martinez, a student at Aldine High School in a poor neighborhood of Houston. He responded to an Army recruitment pitch, called the delayed enlistment program.

But then, as 17-year-olds are wont to do, Eric changed his mind. When the recruiter came to his house and threatened his mother, she went to the recruiting station to meet with the officer in charge: “She talked to Sgt. Marquette and told him that I didn’t want to go, and that’s it. And Marquette said that I had to go, and if I didn’t, that I’d have a warrant for my arrest, and I wouldn’t be able to get no government loans or nothing like that. So, my mom doesn’t really know anything about it, so she believed it, and she told me. And I believed it, too, because I didn’t know much about it either.” It was then that they took Eric to the hotel.

Martinez’s friend, Irving Gonzalez, knew he was next. He had signed up for the same program. As the oldest of four children of a single mother, Irving’s impulse was to help his family survive, get the signing bonus and gain access to a college education. He then wanted to get out of the program, to pursue college directly. He called the recruiter, Sgt. Glenn Marquette. Desperate, he had the call recorded.

Sgt. Marquette: “This is what will happen. You want to go to school? You will not get no loans, because all college loans are federal and government loans. So you’ll be black-marked from that. As soon as you get pulled over for a speeding ticket or anything with the law, they’re gonna see that you’re a deserter. Then they’re going to apprehend you, take you to jail … you will do your time, as you deserve. All that lovey-dovey ‘I want to go to college’ and all this? Guess what. You just threw it out the window, because you just screwed your life.”

Irving and two others were the ones who sneaked Eric out of the hotel.

After the story broke, Marquette was suspended, and the military says it is conducting an investigation, but neither Martinez nor Gonzalez has been contacted. Recent history does not bode well. In 2005, Sgt. Thomas Kelt, who like Marquette worked at the Greenspoint Recruiting Station in Houston, left a phone message for potential recruit Chris Monarch, saying if he didn’t show up at the recruiting station that afternoon: “We’ll have a warrant, OK? So give me a call back.” The story went national. The military conducted a daylong “stand down” on recruitment to retrain their recruiters. They said they removed Kelt. In fact, he was promoted to head up a nearby recruiting center.

I asked Douglas Smith, spokesman for the U.S. Army Recruiting Command in Kentucky, about why Kelt wasn’t punished. Smith replied that Kelt had received a “negative administrative action … just because someone has done something wrong doesn’t mean that they get the death penalty.”

But there’s a difference between the death penalty and a promotion. When I asked Smith what the penalty was, he replied, “I’m not allowed to tell you.”

Smith and the rest of the military may dodge reporters’ questions, but they can be subpoenaed before Congress to testify under oath.

Texas Congressman Ted Poe, a Republican, said: “Our country cannot deceive its citizens. Since the Army hasn’t taken the initiative, now Congress may have to get involved.” Another Texas congressman, Democrat Gene Greene, whose kids went to Aldine High and whose wife taught there for years, agrees. With no end in sight in Afghanistan and Iraq, recruiters must be prevented from using desperate and aggressive measures to lure our nation’s young people — the poorest and most vulnerable — into the line of fire.

This entry was posted in RagBlog and tagged Criminal Justice, Military. Bookmark the permalink.