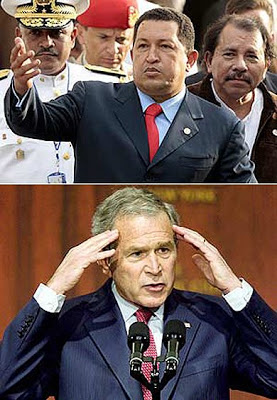 Robert Buzzanco is Professor and Chairman, Department of History, University of Houston. He is the author of Masters of War: Military Dissent and Politics in the Vietnam Era and Vietnam and the Transformation of American Life, and numerous other publications on foreign policy and political economy.

Last Friday, November 7th, the Department of State closed the Venezuelan consulate in Houston and gave the consul general and staff 72 hours to leave the country, another distressing development in the continuing U.S. program to isolate and destabilize the government of Hugo Chávez. While Chávez’s personal dislike for President George Bush may make diplomacy between the two nations difficult, the history of U.S.-Venezuelan relations complicates matters and breeds Venezuelan distrust even more. As U.S. power has waned, Latin America has turned more to the left than at any time in its history, with the Venezuelans establishing credible alternatives to American hegemony after a long century of suffering under regimes propped up by Washington.

The United States long backed military dictators in Latin America as a bulwark against nationalism and socialism and because they adhered to the U.S. principles of “free” trade and investment. In reality, this meant that the Americans recognized leaders produced by military coups, such as Marcos Pérez Jiménez in Venezuela, who had overthrown elected governments. President Dwight Eisenhower, in fact, awarded Pérez Jiménez the Legion of Honor, the highest honor given to a foreign national.

Key to U.S. support of the Venezuelan dictator was his coziness to U.S. business interests. By the 1950s, Americans held up Venezuela as a “showcase” for Latin America, proof of the benefits of economic cooperation with Washington. U.S. investments there rose to about $2.5 billion, or about a third of all American investment in the entire region.

Most of that money went into the oil industry, as Venezuela was one of the biggest exporters of petroleum to the United States [and is still third today, after Canada and Saudi Arabia]. Inside the country, the “oil-garchy,” as it was labeled, lived lavishly while the average Venezuela survived on $500 a year and about half of the adults remained illiterate. With his oil money, Pérez Jiménez spent huge amounts on military programs and other benefits to the elite, while poverty was stifling.

It was amid this history that Hugo Chávez emerged, promising independence from the Americans and social benefits to the mass of those mired in poverty. Not surprisingly, Chávez understood that control of oil resources was the key to economic autonomy, and he has taken steps to nationalize Venezuelan petroleum and remove the overwhelming American control of the oil industry there. He also led the creation of the Banco del Sur, an investment and development institution for Latin America to challenge the U.S.-led International Monetary Fund and World Bank.

In return the U.S. government and media has waged a virulent campaign against Chávez, calling him a “dictator” (particularly ironic since he has been elected several times, has accepted elections that his side has lost, and has more claim to being democratically chosen than Bush did in the U.S. election of 2000) or “crazy.” His associations with other Latin American leftists like the Castro brothers in Cuba or Evo Morales in Bolivia raise the fear of an independent Latin America unwilling to any longer be an economic colony of the United States, so much so that the U.S. supported and abetted a failed coup against the Venezuelan leader in 2002.

But Chávez has pulled back too. Despite warning that he might cut off oil exports to the United States, the Venezuelans still send about 1.25 million barrels a day to the United States and its national company, Citgo, continues to operate throughout the U.S.

Still, the tensions are escalating. In a show of solidarity with the Bolivians and due to his continued fears that the Bush administration would try to oust him, Chávez expelled the U.S. ambassador to Caracas on September 10th , and the Americans expelled the Venezuelan ambassador immediately thereafter.

The more recent closing of the Houston consulate, apparently because of a technicality about moving without State Department permission, was the latest escalation in this political battle and a final salvo by Bush as he prepares to leave office. However, during this latest episode, Chávez has removed Padrino as consul general due to his diplomatic faux pas. Clearly, and contrary to media caricatures, the Venezuelan leader has approached relations with the U.S. on the whole in a reasonable manner and is abiding by diplomatic protocol.

I have met the ex-Venezuelan consul general, Antonio Padrino, and he is an impressive man, with a degree in economics, a background in petroleum, and a desire for better relations with Washington. Various U.S. officials to whom I have spoken say much the same, that it is time to take a more realistic and mature approach to Venezuela. Their hope is that the end of the Bush administration will create the conditions for diplomacy with Caracas. After all, as both sides understand, Venezuela has oil to sell and the Americans are good consumers.

President-elect Barack Obama caught heat during the campaign for saying he would meet with Chávez to improve U.S-Venezuelan relations. But that is the only realistic approach that both sides can take, especially given the U.S. need for more oil and the drop in global petroleum prices that imperils Chávez’s social programs. Ironically, the current economic calamity may provide a chance for Obama to reopen relations with Venezuela, since he, the media, and the public are preoccupied with the crises in banking, the auto industry, pensions, and unemployment, and may have little stomach for petty escalations of this cold war with Caracas.

It is absurd for the United States, a country with a $671 billion military budget, to fear Venezuela, but Caracas has legitimate reasons to be very wary of a country which has supported a coup, openly backs the political opposition, the remnants of the “oil-garchy,” and has waged an incessant public relations campaign against it.

Hopefully, the grown ups will triumph, the Houston consulate, which serves several states and is vital to the lives of Venezuelans in the U.S.–and American businesses seeking to trade and invest in Venezuela–will reopen, and the Americans and Venezuelans will put their mutual need for each other ahead of political differences. Continued tit-for-tat attacks will only damage everyone. Instead of closing the consulate, U.S. officials should open their minds to a new relationship with Caracas.