How to Rig an Election : See Florida, Ohio and Iran 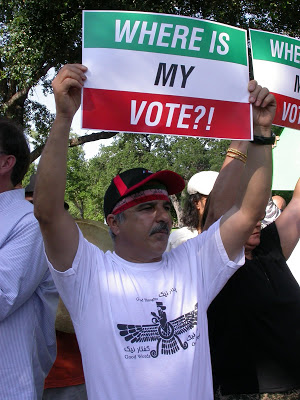 Iran’s Ayatollahs have just admitted that in some 50 cities there were as many as 3 million more votes cast than there were voters in the recent presidential election.

But, they say, that’s not enough to change the outcome. So, like Florida in 2000 and Ohio 2004, there will be no total recount and no new election. Election theft should be opposed, whether it’s sanctioned by a supreme Ayatollah or the U.S. Supreme Court.

It’s as if the Iranian government is being advised by Ohio’s former Iman J. Kenneth Blackwell, who, as Ohio’s 2004 Secretary of State, purged hundreds of thousands of voters, and stole, switched and disappeared enough votes to put George W. Bush in the White House for a second term. The dubious Iranian tallies look very similar to the inflated Bush outcomes in 12 Republican southwest Ohio counties, most notably Warren, Clermont and Butler. They are reminiscent of the vote counts in two precincts in Perry County that reported turnouts of 121% and 118% of registered voters.

John Kerry, trailing in Ohio by just 130,000 votes with more than 250,000 yet to be counted, walked away less than 12 hours after exit polls showed him a clear victor.

Gore fought a little, but instead of embracing martyrdom, opted for boredom, and for making sure there was no challenge in the U.S. Senate to the votes stolen.

Nationwide, Bush’s alleged 3 million-vote nationwide margin in 2004, and 600 votes in Florida 2000, were as fictional as those ballots the Ayatollahs now admit should not exist.

Moussavi believes he has a date with destiny. But Kerry apparently had one on the golf course. Gore’s failure to effectively respond in Florida 2000 remains an inconvenient truth.

Blackwell and Bush then used a lethal mix of black box machines, faulty scantrons and hijacked ballots to finish the job. Blackwell worked with Diebold, ES&S, Triad, and other electronic magicians that let him disappear or switch all the votes he needed with a few keystrokes at around 2am election night. His high-tech IT henchman, Michael Connell, has since died in a mysterious plane crash.

The Times seems to finally understand the problem. In their July 22 editorial, “How to Trust Electronic Voting,” they argued the following: “In paperless electronic voting, voters mark their choices, and when the votes have all been cast, the machine spits out the results. There is no way to be sure that a glitch or intentional vote theft –- by malicious software or computer hacking –- did not change the outcome. If there’s a close election, there’s also no way of conducting a meaningful recount.”

Saddled with paper ballots that may or may not still exist, the Iranian authorities have simply trashed the whole election. “I don’t think they actually counted the votes,” one observer told the New York Times.

Because the American people did not take to the streets in the Iranian model, our democracy was subverted.

Thanks to Kerry and Gore, the public follow-up in Ohio and Florida was ineffective. As in Iran, the primary reporting has been largely limited to the Internet. The results — eight years of George W. Bush — speak for themselves.

But in the U.S., a nationwide election protection movement has arisen that protected the results in 2008, and that could make all the difference for the future of American democracy.

The Iranian people are speaking for themselves, and for the finest principles of democracy. For confirmation and inspiration, they need only look at America 2000-2008 to see the consequences of an unelected government.

[Bob Fitrakis & Harvey Wasserman have co-authored four books on election protection. Bob’s Fitrakis Files is at FreePress.org, where this article also appears. Harvey Wasserman’s History of the U.S. is at harveywasserman.com.]

3 Responses to How to Rig an Election : See Florida, Ohio and Iran