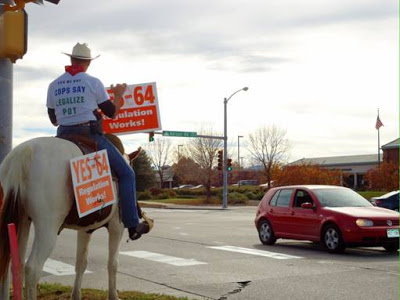 Governor Hickenlooper moaned that tourism would decline or, if more tourists came, they would be the ‘wrong sort of people.’ What a muffin-head he was!

Former police detective Howard Wooldridge will discuss his work to reform marijuana laws on Rag Radio with Thorne Dreyer, Friday, November 30, from 2-3 p.m. (CST) on KOOP 91.7-FM in Austin and streamed live on the web. Rag Radio is rebroadcast on WFTE-FM in Scranton and Mt. Cobb, PA, Sundays at 10 a.m. (EST). After broadcast, all Rag Radio interviews are posted as podcasts at the Internet Archive.

Howard “Cowboy” Wooldridge, the founder and director of Citizens Opposing Prohibition (COP), is a Texan since 1994 and a former Michigan police officer and detective. Like many men and women in law enforcement, he learned early that arresting people for drugs is a faulty proposition and a waste of time, pulling resources away from fighting real crime. Unlike most, however, Howard embarked on a committed crusade to change the drug laws.

With his horse, Misty, Longrider Wooldridge has twice ridden solo from coast to coast, wearing his big Western hat and a white T-shirt that reads, front and back, “Ask Me Why Cops Say Legalize Marijuana.” Traveling on city streets and rural byways, camping out wherever night falls, Howard may have talked with more people one-on-one than any other single drug war opponent with the exception of the late Jack Herer. He has become one of the most effective advocates in Washington, D.C., for ending marijuana prohibition and the “war on drugs” in general.

Most recently, Howard and Misty took part in the successful Colorado campaign to legalize cannabis for recreational and industrial purposes there. (The state of Washington also passed a similar law.) Colorado began allowing medical marijuana use in 2000. In this first of a two-part special report to The Rag Blog, Howard writes about his and Misty’s experience promoting Amendment 64 from a personal (and equine) point of view; next week, he’ll write about the significance and likely fallout of the Colorado electorate’s choice. — Mariann Wizard / The Rag Blog

This is the first in a three-part series.

DENVER — My pickup’s bed was full: two bales of hay, bag of shavings (horse bedding), saddle, bridle, horse blankets, plus all the gear needed to sustain a month on the road with my partner in politics — Misty. Three long travel days later and the Rocky Mountains of Colorado came into view.

We had come to Colorado to promote their ballot initiative on marijuana: Amendment 64. This proposal would essentially (for those 21 and older) legalize, regulate, and tax the use and sale of marijuana. Its major features included: 1) allowing adults to grow enough for private, non-medicinal use; 2) permitting the legal cultivation of industrial hemp; 3) establishing a system in which marijuana could be taxed and sold through state-regulated retail outlets; 4) allowing employers to maintain their existing policies; 5)and it would not impact in any way the laws surrounding the medical use of cannabis.

“64,” as it was known to all, was much simpler to explain and defend than the long, complicated and too detailed Prop. 19 that Misty and I had promoted for two months in California two years ago. Indeed, the prohibition forces in Colorado could only repeat the “fact” that the green plant would be easier for our kids to obtain, as their main reason to oppose. Governor Hickenlooper moaned that tourism would decline or, if more tourists came, they would be the “wrong sort of people.” What a muffin-head he was! 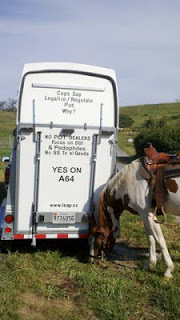 At 64 headquarters on a side street in Denver, I met with the generals of the campaign: Misters Mason Tvert and Brian Vicente. The communications director Joe Megyesy joined us to plot where Misty and I could best serve 64. We decided to focus on population areas in the Front Range (eastern Colorado) and not go to the western side. We grabbed four of their well-designed yard signs plus some brochures before hitting the road to Fort Collins in the north center of the state.

After checking into the Motel 6, I pulled Misty out of her little trailer for a walk around the parking lot.

Misty, who had just spent the last three nights cooped up in her trailer, probably understood by then that this was another California-type adventure: the days spent on noisy, crowded street corners and nights spent in her little trailer staring at the walls. She knew from experience that I would be giving her extra carrots and other treats. Still, it would just be a tough month for her.

The first day went well. The most traveled road in the city yielded a solid three photos taken per minute by motorists and foot traffic. That meant by nightfall, we would be all over Facebook in northern Colorado. I was interviewed by two local daily papers and by the local TV station.

Afterwards I exercised Misty near the motel for nearly an hour. She loves to run and I indulged her. However, I was tired and careless, leaving my bridle and reins near the trailer. When I returned a few hours later, they were gone. As our Texas governor would say, “Oops.”

On Day Two we traveled to Greeley for a rally featuring Vice President Biden. We arrived early that windy, cold morning to greet the Democrats. We parked ourselves where all cars had to pass in order to park. About 10, a guy shouted from a window, “Don’t go anywhere.” A few minutes later the reporter for NPR interviewed me while in the saddle. A week later he opened a nationally broadcast report with my statement on 64. Such things sure help me stay in the saddle. The Greeley paper also published our photo along with their report on the Biden rally. Misty again demonstrated her ability to attract great, free press coverage!

After another day on a street corner near the mall in Greeley, we traveled an hour down the road to Fort Morgan. The next day’s “street theater” yielded yet another newspaper article and photo. We were on a roll!