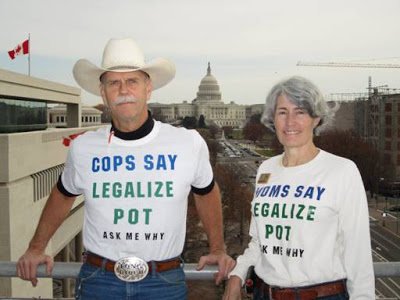 Howard “Cowboy” Wooldridge in Washington, D.C.,  with his wife Karen..
Misty and me:
Fighting pot prohibition in Colorado, Part III

An analysis of the 2012 state initiatives on cannabis.

Howard “Cowboy” Wooldridge, the founder and director of Citizens Opposing Prohibition (COP), is a Texan since 1994 and a former Michigan police officer and detective. Wooldridge has become one of the most effective advocates in Washington, D.C., for ending marijuana prohibition and the “war on drugs.” Howard — with his horse (and “partner in politics”) Misty — took part in the successful Colorado campaign in support of Amendment 64, to legalize cannabis for recreational and industrial purposes there.

This is the third in a three-part series written for The Rag Blog.

The vote this fall has been heard “around the world.” The voters of Colorado and Washington cracked a big hole in the world-wide “Berlin Wall” of marijuana prohibition. Even Holland with its system of cannabis coffeehouses does not measure up to the full legalization passed in these two states.

I just read an article in Der Spiegel (Germany’s Time magazine) pointing out all the policy difficulties this vote has generated for President Obama and leaders of South and Central America. The light is now shining brightly at the end of the tunnel.

And there is no going back. Even if federal agents crack down hard in Colorado and Washington state, try finding a jury to convict “offenders” of anything. While in Colorado I had a meeting with Boulder County District Attorney Stan Garnett. He reiterated to me what he’d said on 60 Minutes: seating a jury of 12 on a marijuana case would be impossible. Jury nullification is a fact in these two states and it won’t go away now.

Beyond our borders, the ripples from the Colorado and Washington waves are striking forcefully, especially in Mexico and Central America. Mexico’s new President Peña Nieto has already called for a review of policy. He asked, “Why should my government enforce marijuana prohibition, when, if that product reaches Colorado, it becomes legal?”

Guatemala’s President Perez Molina has openly called to legalize all drugs to reduce or end the violence and suffering in his drug-transit country. These and other voices are emboldened by the vote, even as the power of the “gringos” is still felt. However, the United States is NOT abandoning its prohibition position, no matter that President Obama was a stoner, not just a toker.

What is all the yelling and screaming about? In Colorado, effective December 10, 2012, anyone 21 and older may possess one ounce (28 grams) of marijuana and grow their own up to six plants (three seedlings and three mature plants). And you know some will grow eight or t10 plants (like doing five miles per hour over the speed limit, cops usually won’t stop you for less than 10 mph over).

Also, the state will set up, by July 1, 2013, a system to sell marijuana in designated, regulated stores. The issue of driving under the influence of marijuana was not addressed. Police officers will continue to employ existing law to arrest for DUI marijuana and other non-alcoholic drugs that impair driving. Amendment 64 is now part of the Colorado constitution. This is important because the legislature cannot mess with it. Taxing marijuana, and how much, are still up in the air.

In Washington, marijuana up to one ounce became legal for 21 and over on December 6, 2012. Cultivation for personal use remains illegal. The state Liquor Control Board will develop, by December 2013, a system to sell marijuana. The Chairman of the House Committee on Public Safety, Roger Goodman, will be in charge of this project. Goodman is a committed cannabis legalizer.

As part of Initiative 502, Washington declared that any driver with five or more nanograms of tetrahydrocannibinol (THC, one of cannabis’ active compounds) in their blood will be considered DUIM. Of interest, the experts credit the marijuana issue with getting an 81% voter turnout, the highest in the nation. The issue turned out voters for and against, and the side favoring an end to prohibition won.

Washington’s tax scheme is set. Count on a 75% tax on the final product. That translates (say Washington government officials) into $12 per gram, currently the illicit market price for quality bud. At that price the cartels can still make a healthy profit by undercutting the price of the legal product.

Both states have a heavy responsibility to set up production, processing, and retail selling correctly. Literally, the eyes of the world are upon them.

Both states’ initiatives also legalized the growing of cannabis hemp (for fiber, fuel, food, and thousands of other non-drug uses) but this will likely have zero impact. The federal Drug Enforcement Administration will still bust anyone growing on the large scale needed for industrial hemp.

Michigan also had five important city votes that demonstrate the will of the voters. The City of Detroit voted 3 to 1 to legalize marijuana. Even extremely conservative Grand Rapids (more churches per square mile than any city in the USA) made simple possession a civil infraction, like a parking ticket. All five votes ended in victory for the anti-prohibition side. Politicians have been put on notice of the will of the people. They ignore these votes at their peril.

What does that mean? In Texas, six-term congressman and former federal officer Sylvester Reyes LOST to legalizer Beto O’Rourke in El Paso this year. Reyes made legalization an issue and he lost. O’Rourke comes to the Congress in January as the first or second freshman elected who voters know favors legalization of marijuana. Jared Polis (D-CO) was probably the first.

The last of the good news came from the Commonwealth of Massachusetts. They voted YES to cannabis as medicine, an issue between doctor and patient. The Bay State makes 18 of the 50 states where God’s medicine is legal at the state level. One in three adult Americans now has legal access to medical cannabis.

Sadly, Arkansas just missed legalizing medicinal cannabis. The vote was about two percentage points shy of common sense and personal liberty. Still, since it was close, and it was the first time any easing of cannabis prohibition had appeared on a Southern state ballot, supporters are putting their shoulder to the wheel and preparing for another day, another election.

Oregon’s Measure 80 failed by three points as a blame game divided supporters. Did it fail because it was not properly funded? Or was it so badly written funders knew it would fail and thus did not waste their money? M80 would have legalized possession and growing marijuana for adults without regard to how much one could possess. The most controversial part was a commission to regulate growing and selling that would have five growers elected at large and two appointed by the government. In other words, growers would be regulating themselves. This may have been what doomed the initiative.

Anti-prohibition forces have realized the goal of the first states going legal. nationally; they are re-energized, knowing that it has become a question of “when,” not “if.” The Empire will strike back as hard and as long as it can.

The DEA and narcotics officers want the paychecks, overtime, and job security. They will continue to spew lies and try to make Americans afraid of a brave new world of regulated and taxed marijuana. But they will lose. As a retired detective, I will grieve for each colleague slain in this useless, senseless prohibition. Which officer, which grower, which dealer will be the last to die?

Howard Wooldridge was Thorne Dreyer’s guest on Rag Radio, Friday, November 30, 2012. You can listen to the podcast here: