Howard Zinn : Obama Must Find the Courage to Fight the Old Ways 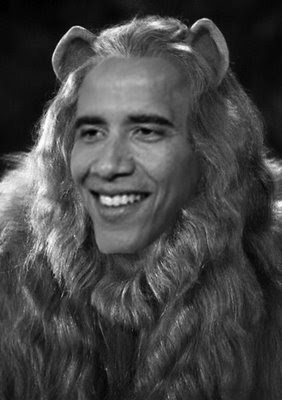 Obama the Politician must find the courage to act on a true vision — of a nation ‘that uses its resources, its wealth, and its power to help people, not to hurt them…’ Image from Cinie’s World.

Finally, someone — Howard Zinn — has publicly addressed Obama’s total failure to confront the employment needs of the almost 10% of the population who are out of work.

The media’s fixation on the bank bailout, climate change, torture, same-sex marriage and health insurance have buried the unemployment issue. Not a single elected official or progressive labor union has called for “full-employment” or subsidized public service jobs. What does that say about the class consciousness of the Democratic Party’s progressive left?

Obama once said, ‘It’s not enough to get out of Iraq; we have to get out of the mindset that led us into Iraq.’ What happened to that Obama?

From the beginning, I liked Obama. But the first time it suddenly struck me that he was a politician was early on, when Joe Lieberman was running for the Democratic nomination for his Senate seat in 2006.

Lieberman—who, as you know, was and is a war lover—was running for the Democratic nomination, and his opponent was a man named Ned Lamont, who was the peace candidate. And Obama went to Connecticut to support Lieberman against Lamont.

It took me aback. I say that to indicate that, yes, Obama was and is a politician. So we must not be swept away into an unthinking and unquestioning acceptance of what Obama does.

I had a teacher at Columbia University named Richard Hofstadter, who wrote a book called The American Political Tradition, and in it, he examined presidents from the Founding Fathers down through Franklin Roosevelt. There were liberals and conservatives, Republicans and Democrats. And there were differences between them. But he found that the so-called liberals were not as liberal as people thought—and that the difference between the liberals and the conservatives, and between Republicans and Democrats, was not a polar difference. There was a common thread that ran through all American history, and all of the presidents—Republican, Democrat, liberal, conservative—followed this thread.

The thread consisted of two elements: one, nationalism; and two, capitalism. And Obama is not yet free of that powerful double heritage.

We can see it in the policies that have been enunciated so far, even though he’s been in office only a short time.

Some people might say, “Well, what do you expect?”

And the answer is that we expect a lot.

People say, “What, are you a dreamer?”

We better hold on to that dream—because if we don’t, we’ll sink closer and closer to this reality that we have, and that we don’t want.

You can’t leave it to the market. If you’re facing an economic crisis like we’re facing now, you can’t do what was done in the past. You can’t pour money into the upper levels of the country—and into the banks and corporations—and hope that it somehow trickles down.

What was one of the first things that happened when the Bush Administration saw that the economy was in trouble? A $700 billion bailout, and who did we give the $700 billion to? To the financial institutions that caused this crisis.

This was when the Presidential campaign was still going on, and it pained me to see Obama standing there, endorsing this huge bailout to the corporations.

Obama wants to spend perhaps a trillion more on the banks. Like Bush, he’s not giving it directly to homeowners. Unlike the Republicans, Obama also wants to spend $800 billion for his economic stimulus plan. Which is good—the idea of a stimulus is good. But if you look closely at the plan, too much of it goes through the market, through corporations.

It gives tax breaks to businesses, hoping that they’ll hire people. No—if people need jobs, you don’t give money to the corporations, hoping that maybe jobs will be created. You give people work immediately.

A lot of people don’t know the history of the New Deal of the 1930s. The New Deal didn’t go far enough, but it had some very good ideas. And the reason the New Deal came to these good ideas was because there was huge agitation in this country, and Roosevelt had to react. So what did he do? He took billions of dollars and said the government was going to hire people. You’re out of work? The government has a job for you.

As a result of this, lots of very wonderful work was done all over the country. Several million young people were put into the Civilian Conservation Corps. They went around the country, building bridges and roads and playgrounds, and doing remarkable things.

The government created a federal arts program. It wasn’t going to wait for the markets to decide that. The government set up a program and hired thousands of unemployed artists: playwrights, actors, musicians, painters, sculptors, writers. What was the result? The result was the production of 200,000 pieces of art. Today, around the country, there are thousands of murals painted by people in the WPA program. Plays were put on all over the country at very cheap prices, so that people who had never seen a play in their lives were able to afford to go.

In the course of his campaign, Obama said something that struck me as very wise—and when people say something very wise, you have to remember it, because they may not hold to it. You may have to remind them of that wise thing they said.

But listen to the second part, too. His whole sentence was: “It’s not enough to get out of Iraq; we have to get out of the mindset that led us into Iraq.”

What is the mindset that got us into Iraq?

It’s the mindset that says force will do the trick. Violence, war, bombers—that they will bring democracy and liberty to the people.

It’s the mindset that says America has some God-given right to invade other countries for their own benefit. We will bring civilization to the Mexicans in 1846. We will bring freedom to the Cubans in 1898. We will bring democracy to the Filipinos in 1900. You know how successful we’ve been at bringing democracy all over the world.

Obama has not gotten out of this militaristic missionary mindset. He talks about sending tens of thousands of more troops to Afghanistan.

One of the first acts of the Obama Administration was to send Predator missiles to bomb Pakistan. People died. The claim is, “Oh, we’re very precise with our weapons. We have the latest equipment. We can target anywhere and hit just what we want.”

This is the mindset of technological infatuation. Yes, they can actually decide that they’re going to bomb this one house. But there’s one problem: They don’t know who’s in the house. They can hit one car with a rocket from a great distance. Do they know who’s in the car? No.

But notice that the word is “suspected.” The truth is they don’t know who the terrorists are.

So, yes, we have to get out of the mindset that got us into Iraq, but we’ve got to identify that mindset. And Obama has to be pulled by the people who elected him, by the people who are enthusiastic about him, to renounce that mindset. We’re the ones who have to tell him, “No, you’re on the wrong course with this militaristic idea of using force to accomplish things in the world. We won’t accomplish anything that way, and we’ll remain a hated country in the world.”

Obama has talked about a vision for this country. You have to have a vision, and now I want to tell Obama what his vision should be.

The vision should be of a nation that becomes liked all over the world. I won’t even say loved—it’ll take a while to build up to that. A nation that is not feared, not disliked, not hated, as too often we are, but a nation that is looked upon as peaceful, because we’ve withdrawn our military bases from all these countries.

What’s required is a total turnaround. We want a country that uses its resources, its wealth, and its power to help people, not to hurt them. That’s what we need.

This is a vision we have to keep alive. We shouldn’t be easily satisfied and say, “Oh well, give him a break. Obama deserves respect.”

Not only is Obama a politician. Worse, he’s surrounded by politicians. And some of them he picked himself. He picked Hillary Clinton, he picked Lawrence Summers, he picked people who show no sign of breaking from the past.

We are citizens. We must not put ourselves in the position of looking at the world from their eyes and say, “Well, we have to compromise, we have to do this for political reasons.” No, we have to speak our minds.

This is the position that the abolitionists were in before the Civil War, and people said, “Well, you have to look at it from Lincoln’s point of view.” Lincoln didn’t believe that his first priority was abolishing slavery. But the anti-slavery movement did, and the abolitionists said, “We’re not going to put ourselves in Lincoln’s position. We are going to express our own position, and we are going to express it so powerfully that Lincoln will have to listen to us.”

And the anti-slavery movement grew large enough and powerful enough that Lincoln had to listen. That’s how we got the Emancipation Proclamation and the Thirteenth and Fourteenth and Fifteenth Amendments.

That’s been the story of this country. Where progress has been made, wherever any kind of injustice has been overturned, it’s been because people acted as citizens, and not as politicians. They didn’t just moan. They worked, they acted, they organized, they rioted if necessary to bring their situation to the attention of people in power. And that’s what we have to do today.

[Howard Zinn is the author of “A People’s History of the United States,” “Voices of a People’s History” (with Anthony Arnove), and “A Power Governments Cannot Suppress.” Thanks to Alex Read and Matt Korn for transcribing Zinn’s talk on February 2 at the Busboys and Poets restaurant in Washington, D.C., from which this is adapted.]

© 2009 The Progressive All rights reserved.

2 Responses to Howard Zinn : Obama Must Find the Courage to Fight the Old Ways