Hugo Chavez: A Commitment to Democracy, Egalitarianism and Civil Liberties 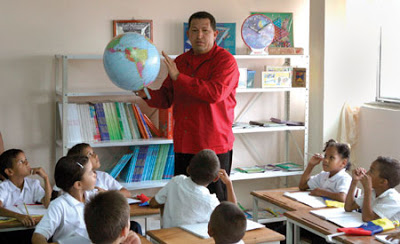 They neglect to report that Chavez always goes out of his way to show support for America’s poor, who suffer from an oppressive ruling elite. He has gone far past the rhetoric, putting his checkbook where his mouth is.

Venezuela-owned Citgo has donated millions of gallons of heating oil to more than 200 indigenous communities, 250 homeless shelters and an estimated 2 million low-income Americans in 23 states — a $100 million-plus contribution.

This is not only solid support for America but also much better than U.S. oil companies, which have refused to engage in similar efforts despite repeated requests from various state representatives.

So, although Chavez’s position is strongly anti-Bush, it is clear that it is not anti-American. I would like to think that the United States is more than just one person.

So, what is America? A superficial answer would say that it is a piece of land, and Americans are the people born on it. But some Americans blow off the tops of mountains to extract carbon for profit. They pour massive amounts of toxic sludge into open pits that ends up polluting and poisoning every thing that lives on the land.

America cannot be just a piece of land because these people exert unspeakable violence against the land, and no one calls them anti-American.

Furthermore, there was a time in which people born on this land where not American citizens; they were representatives of the many indigenous nations that once populated the continent. There was a later time when people born in this land were British subjects. What happened between then and now is what makes this America: the Declaration of Independence and the U.S. Constitution.

That is what America really is: an egalitarian nation of principles, laws and liberties.

So, is Chavez really anti-American? He has honored tremendously egalitarian principles in Venezuela, giving all the people the same rights regardless of their economic status, ethnicity, gender, sexual orientation or origin. He has shown unprecedented respect for every conceivable civil liberty and human right, including every right we have in the United States and others that are not regarded as such in the this country: the right to have three meals a day, to have decent housing, to earn decent wages while working humane hours, to have health care and an education.

Chavez has promoted the creation of 266 community radio and TV stations, giving real muscle to the principle of free speech. This gives people not only the right to speak their minds but also a voice with which they may be heard.

During his nine years in office, there have been more than 11 electoral processes monitored and certified by hundreds of international observers — a lot more than can be said about the U.S. elections.

Chavez’s commitment to democracy, egalitarianism and civil liberties complies completely with the mandates of the U.S. Constitution, making him an exemplary American.

His only fault is that he extends those principles and rights to everybody, even those born outside Venezuelan and U.S. borders.

But that is not at odds with the idea that ”all men are created equal,“ which is the cornerstone of this country’s foundation.

If we want to find someone who is truly anti-American, we should look for someone who claims the right to torture prisoners and creates overseas torture camps.

Someone who uses our military might to loot other countries in violation of basic principles and international laws.

Someone who violates the separation of powers by ignoring the U.S. Supreme Court rulings and adding signing statements to bills passed by Congress.

Someone who takes health coverage away from poor children and families, who spied on U.S. citizens, who rigged elections, who eliminated due process, who imprisons journalists.

If we found someone whose crimes against the Constitution were too many to list, we would have found a true anti-American.

[Jess A. Rivas of Somerset is an assistant Somerset Community College. E-mail him at jesus.rivas@kctcs.edu.]