Hundreds Protest in Texas Against Israel’s Assault on Gaza 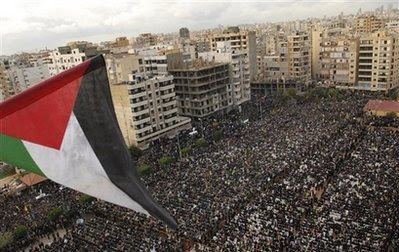 Protesters in Texas joined hundreds of thousands all over the world speaking out against Israel’s assault on Gaza in the last two days. Here, a Palestinian flag flutters in the wind, as people protest in the southern suburb of Dahiyeh, Lebanon, Monday, Dec. 29, 2008.
Stop the bombing, stop the rockets
By Susan Van Haitsma / The Rag Blog / December 29, 2008

See stories about protests in Austin and Houston, Below.

I took part in the demonstration tonight at 11th and Congress in Austin in opposition to the Israeli bombings of Gaza. We stood, a large crowd, around the large Christmas tree and the large menorah, all eight candles and the shammash lit.

It was good to be there in the presence of many persons of Middle Eastern background, as well as others who identify as Jewish, Christian, Muslim, Universalist or non-religious. In the middle of the demonstration, there was a break when some knelt in prayer on the capitol lawn. Jay Janner’s fine photos posted on the American-Statesman site give an idea of those present.

My sign read, “Cease fire – all sides – life is precious.” Some in the crowd believe that armed resistance to the Israeli occupation of Palestine is justified. But, for both moral and practical reasons, I can’t condone violence that takes human life on any side.

Of course, I live comfortably apart from the daily reality of life in an occupied territory. I do know that there are Palestinians, both Muslim and Christian, and Israelies, both religious and secular, who advocate and practice nonviolent forms of resistance to the occupation even in the midst of the deadly violence. Making peace does not mean passive acquiescence. It does mean addressing the conflict without resorting to revenge killing.

In groups that meet to try and reconcile differences between Israeli and Palestinian causes, the most important ingredient seems to be the willingness to walk in the shoes of the other. Everyone has their story to tell, their loss to describe, their pain to express. If these stories can be told, listened to and acknowledged, on all sides, then progress can be made.

When it comes to US relations with Israel and Palestine, there are also questions that must be answered honestly. Who holds the greatest power? Where do business interests translate into political and military power? When do business interests influence media coverage? Who benefits financially when weapons are sold and used? Who pays the cost?

I was glad to see singer/songwriter Eliza Gilkyson present among the crowd tonight because she is able, through her music, to demonstrate what empathy means. She wasn’t there to sing, but many Austinites know her piece, Tender Mercies, in which she gently puts the listener in the shoes of the bomber and the bombed, the parent and the child, so that we understand more than judge. To me, this kind of empathy is a crucial part of what will move us beyond the vicious cycle of war and retributive violence.

Protesters outside the Texas Capitol on Monday evening yelled “end the occupation” and held signs calling for a halt to an Israeli offensive in the Gaza Strip.

At least 200 people stood for hours at the intersection of Congress Avenue and 11th Street, some waving Palestinian flags and signs that read “free Palestine” or “Cease Fire.” Several said the crowd would be back this evening to again rally against bombings in Gaza that began several days ago.

“We’re just trying to make more Americans aware of what’s going on,” Lezley Hemming of Austin said. “I don’t think if their awareness was at the level it should be that they would be supporting anything like this.”

Some in the crowd said the bombings are illegal and should be stopped. They also said the death toll in Gaza, which was more than 360 by Monday, is not justified.

“This is really out-of-proportion carnage,” said Mara Urich of Austin.

Supporters of the Israeli actions, however, say the bombings are in defense of rockets consistently fired into Israeli towns by members of Hamas, along with the deaths through the years from suicide bombings.

“Israel is engaged in an effort to safeguard its population,” said Jay Rubin, CEO of the Jewish Community Association of Austin, by telephone. “In this particular case, Israel is fully justified.”

He said the assault is an effort to weaken Hamas.

“There cannot be peace with an organization using military force to destroy the state of Israel,” he said.

Rubin said Israel has tried other means of defense, such as limited incursions and economic blockades.

HOUSTON—Hundreds lined the sidewalk around the Galleria Sunday in protest of Israeli airstrikes on the Gaza Strip.

Many of the protesters were draped in Palestinian flags.

“Nobody can justify what is happening in Gaza today. No one,” protester Zuhair Hallail said.

Israel said they launched the deadly airstrikes after Hamas leaders sent missiles into their country.

Israel said it is only defending itself, and the airstrikes are intended only for Hamas leaders.

But the country said it’s difficult not to have civilian casualties because of the nature of their enemy.

Yarden said Israel sent out warnings to citizens about the impending attacks, but that the civilian presence wouldn’t deter them from defending themselves.

“We did distribute leaflets, and we did send text messages to their cell phones, to civilians,” Yarden said.

But the Arab protesters want the U.S. to intervene, and ultimately for Israel to pull out of the Gaza Strip altogether.

“Let’s end the occupation. It is the root cause of all major escalations in the Middle East,” protester Kamal Kahlil said.

“Get out of our land and find somewhere else to live with us in peace and harmony, and don’t live with us and stomp all over our heads with your shoes,” Hallail said.

Israel points to the West Bank, where Palestinian President Mahmoud Abbass, who is supported by the West, leads a rival government to Hamas.

“You can see what is going on in the West Bank is a very good example of how we can co-exist with the Palestinians,” Yarden said.