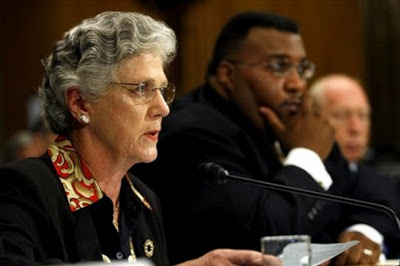 Galveston Mayor Lyda Ann Thomas, who will lead a delegation to Cuba, is shown with Shreveport, La. Mayor Cedric Glover, testifying on Capitol Hill Sept. 23, 2008, before a Senate hearing on disaster recovery. Photo by Jose Luis Magana / AP.
‘Mayor Lyda Ann Thomas will lead a delegation of regional officials to Cuba to find out if Galveston could improve its hurricane response by emulating any part of the Cuban plan.’

GALVESTON — Hurricane Ike smacked the Caribbean island of Cuba twice before rolling on to Galveston.

Although seven Cubans died during the storm, 2.6 million people — 23 percent of the island’s population — evacuated out of harm’s way.

Across Texas, Louisiana and Arkansas, 20 people died during the storm.

Despite the national policy of silence toward the tiny communist nation, America’s coastal communities have something to learn from the Cubans, some say.

Later this year, Mayor Lyda Ann Thomas will lead a delegation of regional officials to Cuba to find out if Galveston could improve its hurricane response by emulating any part of the Cuban plan.

The Washington, D.C.-based Center for International Policy, which is organizing the trip, asked Thomas to join the delegation because Galveston and Cuba were twin victims of Ike, said Wayne Smith, a senior fellow at the center and director of its Cuba program.

“We have our differences to be sure,” he said, alluding to the ongoing tensions between the United States and Cuba. “But both of us are in the path of these hurricanes that seem to be increasing in size, intensity and number. How can we cooperate? How can we better help one another in these circumstances?”

This year’s trip is the third in a series of meetings between Cuban and American officials the center has organized. In 2007, Cuban officials joined political leaders from Louisiana, Mississippi and Alabama in Monterey, Mexico.

In 2008, the group made its first visit to Cuba to visit the country’s meteorological service and meet with medical response teams.

Thomas, who has never been to Cuba, said she was interested to see what Cuba’s hurricane experts had to say.

Cuba’s expertise in dealing with hurricanes dates back to around 1900, when the country established the first hurricane observation network.

The Cubans could have helped warn Galveston about the 1900 Storm, but three weeks before it made landfall, the federal government banned all meteorological information coming from the island.

Thomas and her fellow delegates will publish a report on their findings when they return to the United States.

Although the trip’s dates have not been finalized, it likely will take place in April, she said.

The trip is being funded by the The Atlantic Philanthropies, a New York-based organization that provides grants to groups that work with disadvantaged and vulnerable people.