"I Need the Money to Pay My Bills" 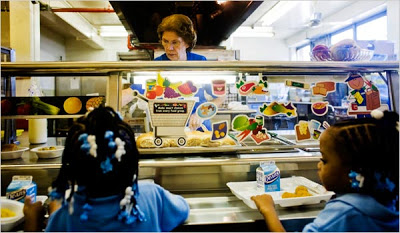 LOUISVILLE, Ky. — With mortgage foreclosures throwing hundreds of families out of their homes here each month, dismayed school officials say they are feeling the upheaval: record numbers of students turning up for classes this fall are homeless or poor enough to qualify for free meals.

At the same time, the district is struggling with its own financial problems. Responding to a cut of $43 million by the state in education spending and to higher energy and other costs, school officials in Jefferson County have raised lunch prices, eliminated 17 buses by reorganizing routes, ordered drivers to turn off vehicles rather than letting them idle and increased property taxes.

The Jefferson County system is typical this school year.

As 50 million children return to classes across the nation, crippling increases in the price of fuel and food, coupled with the economic downturn, have left schools from California to Florida to Maine cutting costs. Some are trimming bus service, others are restricting travel, and a few are shortening the school week. And as many districts are forced to cut back, the number of poor and homeless students is rising.

“The big national picture is that food and fuel costs are going up and school revenues are not,” said Anne L. Bryant, executive director of the National School Boards Association. “We’re in a recession, and it’s having a dramatic impact on schools.”

Louisville’s pain is minor compared with the woes of some cities. Detroit has laid off at least 700 teachers, Los Angeles 500 administrators and Miami-Dade County hundreds of school psychologists, maintenance workers and custodians.

Schools in many states have cut bus stops to save diesel. Districts in California and Ohio have gone further and eliminated bus service either completely or for high schools, leaving thousands of students to find their own way to school.

In Maine, officials worried about the cost of heating their classrooms this winter have restricted travel for field trips to save money. Districts in Louisiana, Minnesota and elsewhere have taken a more radical measure and adopted four-day school weeks. Hundreds of districts, responding to higher food prices, are charging more for cafeteria meals.

In interviews, educators in many states said they were seeing more needy families than at any time in memory. Two charities in suburban Detroit announced in August that they would hand out student backpacks, attracting hundreds of families.

“They went through all 300 backpacks in three hours, boom, and that was that,” said Kathleen M. Kropf, an official in the Macomb Intermediate School District. “We’re seeing a lot of desperate people.”

There were no giveaways for Jacci Murray, 28, a single mother in West Palm Beach, Fla., who said she lost her job six months ago. Ms. Murray bought pencils and crayons for her son, Cameron, who is in the second grade, from a discount bin at Office Depot. Saying she felt “cheap and broke,” she pored fretfully over her school supplies list, afraid to waste gas by making more than one shopping trip.

And so are many educators.

West Virginia officials issued a memorandum recently to local districts titled “Tips to Deal With the Skyrocketing Cost of Fuel.” Last week, David Pauley, the transportation supervisor for the Kanawha County school system, based in Charleston, met with drivers of the district’s 196 buses to outline those policies. Mr. Pauley told them to stay 5 miles per hour below the limit, to check the tire pressure every day and to avoid jackrabbit starts.

The Caldwell Parish School District, in northern Louisiana, took a more sweeping approach to saving fuel by eliminating Monday classes. The district joined about 100 systems nationwide, most of them rural, that in recent years have adopted a four-day schedule.

The district’s superintendent, John Sartin, said the move should save $145,000 in a $15 million budget. The decision, made in June, came after crude oil prices had risen for 29 consecutive days, Mr. Sartin said.

“People here worry that they won’t have enough money to last through the month,” he said.

Similar concerns in the Southern Aroostook Community School District in Maine have delayed adoption of the budget.

“We’ve tried to pass it twice, and we’re trying a third,” said Terry Comeau, the superintendent, who has restricted field trips and taken a bus off the road.

“People are saying, ‘I don’t want my taxes to go higher; I need the money to pay my bills,’ ” said Mr. Comeau, adding that one worry is that heating costs will soar this winter.

The problems in many districts can be traced to battered state budgets. According to a July report by the National Conference of State Legislatures, 31 states had budget gaps totaling $40 billion, and many had cut school financing.

California still has a $15.2 billion budget gap, although many districts there have made cuts, including Los Angeles Unified, which sliced $400 million from its $6 billion budget in June partly by laying off 500 administrators and secretaries, though no teachers.

Many districts are serving increasing numbers of needy students. In Mobile, Ala., the number of homeless students tripled to about 2,500 at the end of the last school year from 850 in the 2006-7 term.

“And our numbers are going to be a whole lot higher this year,” said Larissa Dickinson, a school social worker there. “We’ve had phone call after phone call from families evicted over the summer.”

Officials in districts in a half-dozen states reported similar surges.

In Louisville, 7,600 homeless students were enrolled when the term ended in June, up from 7,300 the year before. But Anne Malone, who coordinates efforts to help homeless students, said the figure would be “way up over that this year.” Ms. Malone cited foreclosure statistics from the Metropolitan Housing Coalition in Louisville that about 10 families were evicted every day here.

The number of students whose family’s income qualifies them for subsidized meals is up, too.

Last year, about 58,000 Jefferson County students were eligible for free or reduced-price meals. This year, the number is likely to reach 62,000, said Mary R. Owens, who coordinates the program here. In interviews, officials in California, the District of Columbia, Florida and Wisconsin also projected increases in the number of students who would qualify for free or reduced-price meals.

Nationally, 14.9 million students qualified for free lunches last year, according to data from the Agriculture Department; the Bush administration’s budget estimates that an additional 283,000 students will be eligible this year.

A department spokeswoman, Jean Daniel, said that subsidized meals were an entitlement and that no students would be turned away if participation exceeded estimates.

The office here where parents fill out forms to qualify for subsidized meals has seen a stream of anxious parents this year, often in tears, pleading for the free meals for their children because they do not have 70 cents a day to pay for the reduced-price meals, Ms. Owens said.

“We’ve had a lot of daddies coming in to say their check doesn’t cover like it used to,” she said.

This entry was posted in RagBlog and tagged Economy, Education. Bookmark the permalink.