I Will Always Be Watched, Or Far Worse, Hunted 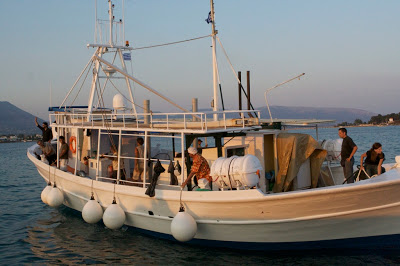 Intimidation Will Not Stop Our Mission: Sailing to Gaza
By Osama Qashoo / August 23, 2008

This morning I am sorry to find myself back on dry land in Cyprus, separated from my fellow sailors who are now completing the final leg of their trip to Gaza. They are carrying humanitarian and medical aid to a people now suffering both an international boycott and the illegal Israeli occupation. On board the refurbished fishing boats, SS Free Gaza and SS Liberty, are more than 50 activists from 17 nations – Jews, Muslims, Christians, Buddhists, farmers, fishermen, officials, language teachers, piano technicians and one 85-year-old Holocaust survivor – all united in their determination to break the Israeli siege.

After months of preparation, the Free Gaza Movement’s perilous relief mission is under way. But I am not with them, despite the fact that I am the only Palestinian-born organiser involved. Last week, my immediate family, who still live in the West Bank, were attacked and terrorised, and I also received numerous anonymous death threats. My family were warned that I must leave the project, and that I must not contact the media. This psychological terrorism now forces me to make a public protest. Though I am no longer on board, I will not leave this mission, even as potential confrontation with the Israeli military looms closer.

The UN has called the situation in Gaza a humanitarian disaster, but the inhumanity goes on. More than 200 civilians have died due to the refusal to let people leave Gaza to seek medical care. The United States, the country that assumes stewardship of the world and whose influence could change the situation, stands by. Worse still, it endorses absurd Israeli claims, such as the recent labelling of innocent Fulbright scholars as “potential security threats” to bar them from taking up their scholarships abroad.

Internationally, the thin veneer of diplomacy has shattered again. On June 19 Israel agreed to halt military invasion and the indiscriminate shelling of Gaza, in return for an end to the launching of homemade rockets towards Israel. Israel has not met its obligations. Gaza’s borders, gates that imprison 1.5 million civilians, remain locked, and scant supplies get through. Even medical supplies are being blocked.

I grew up in Palestine and have lived in fear since childhood. The horror of witnessing elders of my family being bullied and humiliated, the daily terror of losing my parents. Watching my family elders being humiliated, the child’s voice inside me would cry out silently: “How can I stop this?”

While I was on board the Liberty, I listened to the threatening messages hijacking the ship’s emergency channel, illegal for use unless in distress. These voices reawakened a deep, familiar feeling in me: that no matter how civil, kind, non-violent I am, I will always be watched, or far worse, hunted.

Now I realise that the biggest friend of psychological terror is silence. The Free Gaza Movement aims to challenge the physical stranglehold on Gaza, but more importantly, this mission seeks to break the silence for millions of voiceless civilians whose daily stories of persecution go so cruelly ignored by the international community.

When our boats arrived in Cyprus on August 20 to collect the rest of our 40-plus group, news reached us that Israel’s deputy prime minister and minister of foreign affairs, Tzipi Livni, had finally responded to our invitation. The Free Gaza Movement had invited her to join the Cypriot authorities, who were coming aboard to search our boats in order to address their security concerns. Citing the Oslo accords, a document from the legal department of the foreign ministry asserted Israel’s right to use force against our boats. It claimed that security forces were permitted to detain the vessels upon entry to Gaza’s territorial waters, and that the peaceful, unarmed activists on board could be forcibly arrested, detained and “interrogated” in Israel. Why does a peaceful relief mission bring fury, fear and threat from the Israeli government?

Is this the way Israel observes its responsibilities under the Oslo accords? Under the accords and the Gaza-Jericho agreement, the only authority Israel reserved for itself was for “security” purposes. Our boats are no threat. Our David and Goliath mission is a focused, direct action to challenge the inertia of the international community which allows the “humanitarian disaster” suffered by the people of Gaza to continue. The activists carry no arms or threat of violence. If the Israeli government orders the destruction of this mission, it will surely be an act unequalled since the blowing up of the USS Liberty more than 30 years ago, a secret mission of sabotage to draw the Americans into the war against Egypt.

The prospect casts a shadow on our mission. But Liberty and Free Gaza will bring their peaceful cargo to the people of Gaza. Many families will now be gathered on the Gaza beaches, waiting and praying for the boats’ safe arrival. For those families, simply to be afloat in these crystal blue seas, enjoying the freedom of international waters, would be a truly wonderful thing indeed.

Osama Qashoo is a documentary film-maker and broadcaster.