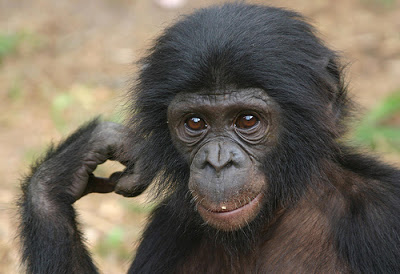 Last time we talked about chimps, who can be pretty nasty. But we are genetically related to bonobos just as much as to chimps.

Among bonobos females dominate, not males; there is no deadly warfare; and they enjoy enormous amounts of sex. This may well have to do with their richer supply of food; there is far less need for competition for it. Bonobos have lots of sexual contact with each other, in all combinations of genders.

There is more of it in captivity, but frequent sexual activity has been observed in the wild as well. Females are sexually receptive for long periods of time, much longer than female chimpanzees. When different bands meet there is initial tension, but no vicious fighting; instead, individuals have sex with each other.(1)

Sex seems to be a way to defuse tension in advance of potential conflict, particularly over food. But anything, not just food, that arouses the interest of more than one bonobo at a time tends to result in sexual contact. After a flurry of sex, the apes settle down to eat or investigate whatever has piqued their interest. Bonobos are not “sex-crazed apes” as the popular press would have it. For bonobos, sex is just a natural and common part of life.

Bonobo bands are hierarchical, but the hierarchies are dominated by females, who enforce their status non-aggressively by cultivating alliances. High rank provides food for the females and their families, males included. Males derive status from their mothers. There is no competition among males for sex, as it is plentifully available.

Bonobos, like chimps, show empathy, theory of mind, and targeted helping. Once, when the two-meter moat in front of the bonobo enclosure in the San Diego zoo had been drained for cleaning, several youngsters climbed down into it. When the keepers went to turn on the valve to refill the moat with water, an old male, Kakowet, came to their window screaming and frantically waving his arms.

He knew the routine, and knew that the children were in danger (bonobos cannot swim). The keepers went to see what was wrong and rescued the youngsters.(2) Clearly, Kakowet had envisioned what was about to happen and cared enough to try to stop it. Fortunately, he succeeded.

Apart from the obvious superiority of human intellect, including language and culture, humans differ from both chimps and bonobos in reproductive strategy. Only the dominant chimp males get to reproduce, and the male sometimes enforces his own lineage through infanticide. Among bonobos all males reproduce, but there is no way to tell who is the father of any given child. Infanticide is unknown, probably for that very reason. Children are enjoyed and cared for by the whole tribe.

Humans have quite a different strategy for reproduction. We bond in pairs, creating a nuclear family that ensures resources for children, and the father is very much involved in child care: humans have high male parental investment. Sexual exclusivity ensures that every man has the potential to reproduce and that he knows which children are his.

This arrangement allows males to cooperate in groups away from the females without fear of being cuckolded. There is some plausible speculation that this arrangement is fairly recent, arising only when humans adopted the technology of agriculture.(3) Quite possibly our pre-agriculture hunter-gatherer ancestors were more like bonobos, having multiple sexual partners.

Bonobos were recognized as a separate species less than 100 years ago and began to be fully documented less than 50 years ago. Before that time, many ethologists and anthropologists believed that humans were innately violent and aggressive. Morality, it was thought, was a veneer of cooperative sociality on an underlying bestial nature.

Now that we know about bonobos, the range of human behavioral potential seems to have expanded. We recognize that we too have the capacity to live in peace and to defuse conflict proactively with pleasure. In addition, male dominance seemed a natural part of things until the discovery of bonobos; now we see that dominance by females may be equally natural.

Two things stand out from this comparison of species. First, our difference from chimps and bonobos is a matter of degree, not kind. There are few, if any, uniquely human traits that chimps or bonobos do not have to a lesser degree. We are embedded in nature and are not a species unique and special.

The one trait that seems most unique is the cultural, not biological, innovation of nuclear family pair bonding. If we think of concern for others as a fundamental building block of morality (another is a sense of fairness in reciprocity), it is clear that even morality is not a unique feature of our species but an outgrowth of capabilities that have far older evolutionary roots.

So when we observe our fellow humans jockeying and posing to gain status, or consoling each other when they are in trouble, or forgiving each other after a dispute, or throwing a party, or sharing food to build bonds and defuse tension, or being suspicious of those who are different, or vilifying an enemy, or generously giving aid to the unfortunate, or hundreds of other hominin behaviors, we should realize that these are not uniquely human practices but are instead embedded in a great chain of life that stretches back many millions of years.

Second, humans have the capacity to amplify the characteristics found in our sibling species. Humans have greater brain size and intelligence, so we can do more effectively all the things our siblings can.

Our use of tools and technologies enables us to produce food in more variety and abundance. In fact, there is some plausible speculation that learning to cook was a turning point in our evolution, as cooked food provides more calories than raw, calories that could support the growth of larger brains.(4)

Our use of language enables us to communicate more effectively and to perpetuate what we learn through culture and art. Chimps and bonobos seem to be able to conceptualize that something not happening in the present will happen later, but humans have a greatly enhanced ability to visualize and anticipate the future.

Disputes among humans often take the form of wars and feuds, but we are capable of sophisticated negotiation and diplomacy as well. And we can avoid conflict through pro-active peacemaking and compassionate communication. We are better able to cooperate with others outside our own group than chimps or bonobos.

Says Frans de Waal, “[H]umans share intergroup behavior with both chimps and bonobos. When relations between human societies are bad, they are worse than between chimps, but when they are good, they are better than between bonobos.”(5)

We humans can be more aggressive but also more peaceful, more competitive but also more cooperative. We are more flexible and have more options than our fellow creatures. We have a great variety of possible behaviors, possible ways of being. And, through our ability to anticipate the future, we have a choice as to which of these we will actualize.

Being related genetically to both chimps, who settle sexual issues through conflict, and bonobos, who settle conflict issues through sex, we have the capacity for both. Being humans, with bigger brains, much richer culture and much wider repertoire of behavior, we get to choose our strategies.