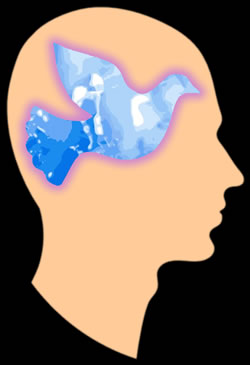 Image from InspireD2.
Free Will or Free Won’t?

Human beings act on their desires and beliefs, and the way we predict what people will do is not by examining their brain waves but by understanding what they want and what they think is true.

I’ve heard a number of people say that a well-known experiment performed by neuroscientist Benjamin Libet proves that human beings do not have free will. It doesn’t. As is often the case with such research the experimental results are replicable, but the theoretical implications are subject to interpretation. Interpretations differ, and the one given by free-will deniers is, I believe, shortsighted.

Benjamin Libet was a researcher in the physiology department of the University of California, San Francisco who was intrigued by the difficulty of investigating human consciousness.(1) The difficulty is this: unlike most of what science investigates, consciousness, or subjective experience, is not available for public inspection. Scientific advance depends on researchers’ being able to replicate experiments, to observe the same things that others observe. The public, or objective, world is out there for anybody (or anybody with suitable training) to see. But subjective experiences are, in Libet’s words, “available only to the individual subject who is experiencing them.”(2)

Libet’s answer was to observe what people report about their experience. He would wire a subject up in order to observe brain activity and then apply a stimulus and ask the subject to report on what he or she experienced. In this way he could tell how strong the stimulus needed to be and how long it had to be applied in order to produce a conscious experience of it. He could distinguish between how long it took for someone to detect an event, as evidenced by their involuntary reaction to it, and how long it took for someone to become conscious of it, as evidenced by their report.

As it turns out, we take about a half a second to become conscious of something after it happens, but we can react to it without being conscious of it much more rapidly (for example, blinking our eye when something flies toward it).(3) That finding raises interesting questions about our knowledge of the world — Are we always a half-second behind what really happens? If so, how is it that we get around in the world successfully? — but they are not my topic in this essay.

The experiment that has gotten the most attention was an attempt to find out something about voluntary acts, acts in which the subject consciously and deliberately does something. Are voluntary acts similarly delayed?

Prior research had established that shortly before a voluntary act is done, such as flexing one’s wrist at a time of one’s own choosing, electrical activity in the brain arises, an event termed “readiness potential” (RP). The RP occurs in the brain up to 800 milliseconds before the physical act.(4) Libet wanted to find out when the subject becomes conscious of the will to act, when consciously wanting or wishing or willing to act occurs, an event he termed “W.” W certainly happens before the physical act, but does it occur before or after the RP?

Here is the experiment. The subject, who is wired up, sits before a clock-like device in which a dot of light sweeps around a circle quite rapidly, about two and half seconds per revolution instead of the usual 60 seconds. This device allows measurement of time differences in the hundreds of milliseconds. The subject is told to flex their wrist whenever they choose — a voluntary act — and to note the position of the dot of light when they decide to do it.

So how can we be said to have free will if our choice is actually initiated by brain activity before we even know it? Many people take these results as evidence that our will is not in fact free, but is determined by physical events in the brain.

Libet himself had his doubts. He devised another experiment in which the subject was told to prepare to act at a certain time on the clock-like device, but to veto that expected act when the device reached 100 to 200 milliseconds before the preset time. In this case the RP for the act developed, but then flattened just as the subject was vetoing the act. “This at least demonstrated that a person could veto an expected act within the 100-200 msec before the preset time … .”(7)

Commentators have called this phenomenon “free won’t”;(8) and Libet thought it demonstrated that we do have free will, but it is limited to vetoing processes that are initiated unconsciously. He distinguishes between an initiation process and a control process, the former being unconscious and the latter conscious.(9)

That distinction seems dubious to me, as the experiments are not directly comparable. In one case the subject is told to act when he (or she) chooses; and in the other case he is told to act, not whenever he wants, but at a certain time and to veto the act at a slightly earlier time.

On the face of it, it seems as if our will is indeed determined and not free, but there are numerous objections to this conclusion. The most obvious, perhaps, is that we have no warrant to generalize from the results of a simplified experiment to our experience of willing in general. Libet responds that it is common in science to study a simple system and then find similar behavior in more complicated systems, and the fact that other experimenters have found similar results in variants of the original experiment give us justification to believe that the findings apply to voluntary acts in general.(10)

OK, but there are other ways to challenge Libet’s conclusions says the author of the blog Conscious Entities:

We could… question whether RPs really have the significance attributed to them. We could question whether the unusual circumstances of the experiment, with subjects thinking in advance about making a decision, and then making one for no reason whatever, properly represent normal thought processes. We could take the view that the experiments involve at least two mental reporting processes, one to do with the occurrence of the decision, one to do with the state of the clock, which makes any judgement of simultaneity highly problematic.(11)

A stronger objection is this:

Libet often seems to take it for granted that every free act is preceded by a specific act of will, but that isn’t really the case. Often the conscious mind sets a general plan, on which we then act more or less automatically. A tennis player has thought in general terms about how to play the next stroke long before the need for actual action; drivers have a kind of running rule in the back of their mind to the effect that if something suddenly appears in front of them, they hit the brake.

Free will operates at this higher level, with all our actions being managed in detail by unconscious processes. I don’t have to think about where I want to hit the ball at the very moment of decision in order to control my game of tennis any more than I have to think separately about each of the individual muscles I am implicitly proposing to contract.(12)

As this objection suggests, when we think that brain activity causes what we do, we are not looking in the right place for free will. It has to do with who is acting, who the agent is. When we say “I made the choice” and “I did not make the choice, my brain did it” we are using the term “I” to mean different things.

In the former case, when we say “I made the choice,” I means the whole constellation of elements that constitutes me. I, and not someone else, made the choice; and I am an ongoing pattern of decisions, reactions, thoughts, feelings, emotions, and so forth, not to mention a physical body. But in the latter case, when we say “I did not make the choice; it was determined by brain activity,” I seems to mean some subset of the elements that constitute me.

It’s as if we are thinking of ourselves as a tiny person who lives in the nooks and crannies of the brain and gets buffeted by electrical activity and forced to take action. But that’s not who we are. We are (each of us is) a whole person, and the ascription of agency and free will is properly made to the whole person, not a subset.

Libet has discovered one of the mechanisms by which choice operates in a specific, constrained situation. But you are not the mechanism, you are the agent who incorporates the mechanism; and the laws of agency operate at a higher level than the laws governing the mechanism. The laws that most usefully describe us as whole persons are agential, not mechanical, laws.

By “agential laws” I mean that human beings act on their desires and beliefs, and the way we predict what people will do is not by examining their brain waves but by understanding what they want and what they think is true. And, as I have written elsewhere,(13) the way we get them to do something, especially if we want their willing cooperation, is by influencing their desires and beliefs. We change their desires through enticement, persuasion, cajoling, bribery, offers of exchange, reward or punishment and so forth; or we provide evidence to convince them of certain facts; or we do both.

Artificial intelligence researcher Ray Kurzweil makes the point that it is important to model systems at the right (by which he means the most useful) level.

Although chemistry is theoretically based on physics and could be derived entirely from physics, this would be unwieldy and infeasible in practice, so chemistry has established its own rules and models. Similarly, we should be able to deduce the laws of thermodynamics from physics, but once we have a bunch of particles, solving equations for the physics of each particle interaction becomes hopeless, whereas the laws of thermodynamics work quite well. Biology likewise has its own rules and models. A single pancreatic islet cell is enormously complicated, especially if we model it at the level of molecules; modeling what a pancreas actually does in terms of regulating levels of insulin and digestive enzymes is considerably less complex.(14)

Similarly, it works much better to think of ourselves as agents with free will, the ability to decide for ourselves what to do, than to think of ourselves as the effects of neural mechanisms. And in fact even those who profess a belief in determinism act in actual practice as if they can make choices. We have found out a lot about the workings of the brain, and no doubt we will find out more. But knowing how the carburetor works is not the same as being able to drive the car skillfully.

That said, it is certainly useful to know how the mechanisms work so we can notice when they are operating and what they are doing and decide what to do about it. There are other mechanisms besides brain activity that influence our behavior, a topic to which I hope to return next time.