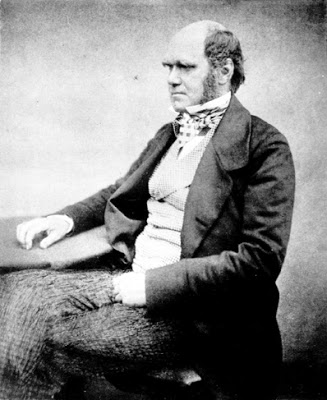 Charles Darwin: Blame it all on him. Image from Wikimedia Commons.

Regardless of your opinion on the ultimate purpose of it all, it is important to understand how evolution works because the theory reflects reality, and basing your actions on reality works out much better than not.

If we want to know what human nature is — and we do, as that will tell us how to live a fulfilling and happy life — then we have to understand evolution.

The theory of evolution describes how generations of living organisms change over time. Humans are living organisms. We are subject to and products of the same evolutionary pressures as all other living things. Understanding how we got to be as we are gives us insight into how we function. Knowing that, we can adjust our actions so as to function well.

It is called the theory of evolution, but “theory” does not mean conjecture, speculation, or mere opinion. The term in its scientific sense means a well-supported body of interconnected statements that explains observations and can be used to make testable predictions.

The theory of evolution has been confirmed over and over again.(1) No serious biologist takes it as anything but fully established. In the words of Theodosius Dobzhansky, author of a major work on evolution and genetics, “Nothing in biology makes sense except in the light of evolution… Seen in the light of evolution, biology is… the most satisfying and inspiring science. Without that light it becomes a pile of sundry facts, some of them interesting or curious but making no meaningful picture as a whole.”(2)

It is unfortunate that religious fundamentalists, misusing the term “theory,” regard evolution as unproven. Some go so far as to say that all the evidence that leads us to believe in the immense age of the universe and the proliferation of species over time, as opposed to instantaneous creation some 6,000 years ago, were planted by the creator merely to give the appearance of great antiquity.

Dobzhansky, a Christian, has this retort: “It is easy to see the fatal flaw in all such notions. They are blasphemies, accusing God of absurd deceitfulness. This is as revolting as it is uncalled for.”(3)

Regardless of your opinion on the ultimate purpose of it all, it is important to understand how evolution works because the theory reflects reality, and basing your actions on reality works out much better than not. So the rest of this essay is a summary of the theory of evolution.

The term “evolution” in a general sense means a process of change or growth, often taken as a process of continual change from a simpler to a more complex state. In biology, the term refers to two things:

The basic concept of biological evolution as we understand it today is surprisingly simple. Charles Darwin, its originator, called it “descent with modification.” The concept is this:

Darwin called this process “natural selection,” as opposed to artificial selection, the intentional breeding for certain traits that produces such differences in the same species as the Great Dane and the Chihuahua. The underlying mechanism is the same in both kinds of selection: certain individuals have more offspring than others, so their traits become more widespread in the population of that type of organism.

A subset of natural selection called “sexual selection” is a result of competition for mates. In order to have offspring, an individual must not only survive but reproduce. Competition for mates, most often among males for females, selects for traits that enable males to dominate other males, such as horns and antlers, and for traits that attract females, such as plumage and other adornments.

This process happens slowly but inexorably. The variation between parent and offspring is most often minuscule, but over enough generations large changes result. A series of small, incremental changes can, given enough time, produce the extraordinary variety of speciation we find around us.(4)

What is inherited is a trait, a feature of an organism such as eye color. Traits are passed from generation to generation as discrete units. Gregor Mendel conducted a famous study in which he mated pea plants, some of which had purple blossoms and some of which had white. The offspring did not have pale purple blossoms, but rather some had purple and some white, in distinct proportions.

What passes these discrete traits from generation to generation is the gene, the fundamental physical and functional unit of heredity. A gene is a segment of nucleic acid that, taken as a whole, specifies a trait. Genes are contained in chromosomes, which are composed of DNA (deoxyribonucleic acid), a polymeric molecule found in cells of the body. DNA governs the production, growth and reproduction of the cells of the body. The current understanding of biological evolution, developed since Darwin’s time, recognizes the gene as a fundamental, if not the fundamental, unit of natural selection.

Functionally, genes pass traits from generation to generation. They do this by replicating themselves from parent to child. Physiologically, the same chemical structure appears in the child as was found in the parent. In combination with other genes and triggered by environmental influences, the genes cause the parent’s traits to appear in the child.

The term “trait” includes physical forms, such as bone density or eye color, behaviors such as sounding mating calls in certain seasons, and mental abilities or talents such as stereoscopic vision, empathy, or language.

Genes are not the only replicators. Ideas, symbols, behaviors, and other elements of culture replicate as well. Genes replicate from generation to generation; their cultural analogues, dubbed “memes,” replicate from mind to mind through writing, speech, gestures, rituals and the like.(6) The principles of evolution apply the same: like a gene, a meme is a replicator, except memes replicate contemporaneously between minds rather than historically between bodies.

Just as genes are subject to competition — the ones that replicate to the next generation are those that help their host bodies to survive and reproduce — so also are memes: only those that are catchy enough to secure attention in human minds replicate from mind to mind. What makes a meme catchy can be something as trivial as a memorable tune or limerick, or something that has continuing usefulness, such as ideas that hold cultures together.

So there is an abbreviated account of evolution. What does it mean for understanding human nature? To know what we are we must understand where we have come from. It is not just in our physical form that we have evolved, but in our mental capacities and in our cultures as well.

Are we, then, merely products of our evolutionary heritage, unable to change? No, but in our attempts to change, it certainly helps to understand what we have to work with. Understanding that inherited traits are the result of natural selection can help put in context findings about how we humans actually function in the world, a topic to which I intend to turn in future essays.

(1) See, for instance, the section titled “Predictive Power” in Wikipedia, “Evolution as fact and theory.”
(2) Dobzhansky, “Nothing in Biology Makes Sense Except in the Light of Evolution.”
(3) Idem.
(4) There are three sources of variation: mutation, gene flow and genetic shuffling through sexual reproduction. Mutation happens when environmental influences cause tiny changes in the chemical structure of genes, altering their functioning, or when cells divide and imperfectly replicate their DNA. By far the majority of mutations are destructive, degrading the gene’s ability to do its job of directing the growth of organs and characteristics, but some enhance that ability, or change it so that the result is advantageous. Gene flow refers to the transfer of genes between populations of an organism. Individuals from one population mate with individuals of another and transfer genes between them. Genetic shuffling through sexual reproduction causes the combination of genes in each child to differ from that of its parents. In species that reproduce sexually, each individual has two copies of every gene (specifically, each has two strands of DNA, each of which contains chromosomes, which contain genes). In sexual reproduction, the child gets some genes from the mother and some from the father, and the combinations vary with each child.
(5) Religious or mystical thinkers may postulate a divine purpose that guides the process of evolution, but the science of biological evolution does not need that hypothesis to explain the process.
(6) Dawkins, The Selfish Gene, chapter 11, pp. 189-201.