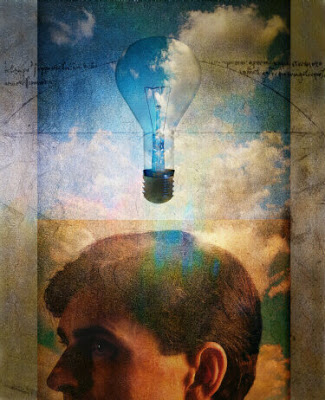 Image from A Blog for English Lovers.
Intelligence

Cognition is how we acquire knowledge. Intelligence is what we do with it.

Cognition, which I talked about last time, is how we acquire knowledge. Intelligence is what we do with it. Human intelligence — and, I assume, the intelligence of some other species such as apes, dolphins and whales — consists in the ability to entertain in thought something that is not happening at the moment and consequently to tailor behavior to the specific features and nuances of a particular situation. Less intelligent animals have far less flexibility.

A gazelle on the plains of Africa has, we can imagine, quite a vivid appreciation of its surroundings. What looks to us like uniform grasslands is to it a rich tapestry of differentiated food patches. In this sense its visual cognition is rich. But it has only a limited repertoire of what to do with that richness, a repertoire evolved to be universal to the species and applicable uniformly across the environment in which it lives.

By contrast a bushman hunting the gazelle uses arrows that are tipped with a poison found only on the larvae of a certain beetle. Cosmides and Tooby say, “Whatever the neural adaptations that underlie this behavior, they were not designed specifically for beetles and arrows, but exploit these local, contingent facts as part of a computational structure that treats them as instances of a more general class.”(1)

In contrast to non-human animals, we have the ability to improvise our behavior in response to local, contingent facts, facts most likely not true for all humans and in all the environments in which humans find themselves. Eskimos hunting seals have no knowledge of poisonous beetles.

The capacity of other animals to process information is limited. It has evolved to handle features of the world that were true across the species’ range and throughout many generations, enough that they selected for the adaptations we find in such animals today. “These constraints narrowly limit the kinds of information that such adaptations can be designed to use: the set of properties that had a predictable relationship to features of the species’ world that held widely in space and time is a very restricted one.”(2)

We humans, in contrast, can recognize and respond to a far greater set of environmental cues. We can envision far more possibilities and are far more flexible in our behavior. In short, humans can plan. Humans, say Tooby and Cosmides, are “intelligent, cultural, conscious, planning animals.”(3)

By planning, we mean creating cognitive representations of past, present and future states of the world, evaluating alternative courses of action by representing consequences and matching these against goals…(4)

…the ability to attain goals in the face of obstacles by means of decisions based on rational (truth-obeying) rules.(5)

Planning — the application of intelligence — is an evolved adaptation for improvising novel sequences of behavior to reach targeted goals. Human intelligence widens the range of environments in which we can survive and reproduce.

Planning involves imagining different scenarios and, importantly, the ability to distinguish imagined, remembered, and anticipated scenarios from what is actually happening in the present situation. Cosmides and Tooby call this the “scope problem,” how to distinguish facts and valid inferences that are true within a certain imagined scenario from those that are true in other scenarios or in the actual world.(6) In the language of computation, this means

the capacity to carry out inferential operations on… suppositions or propositions of conditionally unevaluated truth value, while keeping their computational products isolated from other knowledge stores until the truth or utility of the suppositions is decided, and the outputs are either integrated or discarded.(7)

Our ability to keep things separate in this way enables all sorts of advanced behavior:

This capacity is essential to planning, interpreting communication, employing the information communication brings, evaluating others’ claims, mind-reading [the ability to understand others’ beliefs, intentions and desires], pretence, detecting or perpetrating deception, using inference to triangulate information about past or hidden causal relations, and much else that makes the human mind so distinctive.(8)

Cosmides and Tooby postulate a capacity they call “scope representation,” the ability to identify under what conditions information can be treated as accurate and inferences as valid.(9) Because we can represent their scope independently, we do not confuse our considerations of possible strategies, memories of past situations, anticipations of the future, imaginings of possible scenarios and the actual conditions we find ourselves in.

Those who do confuse these things we readily identify as aberrant. Schizophrenia can be interpreted as a failure of mental boundaries in which, for example, a person experiences their desire to do something as a command to do it.(10)

The capacity to represent the scope of our plans, perceptions and imaginations separately is at the foundation of literature, and story-telling generally. Humans in all cultures love stories. In stories we can mentally rehearse or represent various social situations without having to actually encounter them. We can find out how others — the characters in the stories — handle these situations and hence learn successful and unsuccessful strategies for ourselves.

As Cosmides and Tooby put it, “individuals are no longer limited by the slow and erratic flow of actual experience compared to the rapid rate of vicarious, contrived, or imagined experience.”(11)

This ability to decouple various scope representations enables quite a number of human faculties, including the following:

Of these, theory of mind is one of the most interesting, because it entails much that is strikingly human. Humans have been called “ultrasocial”(18) and “obligatorily gregarious.”(19) We live in large cooperative societies in which hundreds or thousands of people enjoy the benefits of division of labor. We must have ongoing and extensive contact with our fellows in order to survive and thrive.

To succeed at this we must understand our fellow humans as having subjectivity like our own. The term “Theory of Mind” refers to the ability to attribute mental states — beliefs, intentions, desires, pretense, knowledge, etc. — to ourselves and others and to understand that others have beliefs, desires, and intentions that are different from our own.(20)

We assume that the salesperson in the store will sell us the goods we want, and that other people walking on the sidewalk with us will generally stay on the sidewalk. Depending on context, we view the offer of candy as friendly or a threat.

Philosophers may ponder how we can have knowledge of other people’s mental states, to which we have no direct access, but in fact we assume such knowledge all the time and life together would be impossible without it. Of course we can be mistaken or deceived, but mistakes and deception would not be possible without familiar assumptions that most often turn out to be correct.

Researchers have found several stages in the development of theory of mind in infants and young children as well as animals.(21)

These judgments are automatic, a form of hot cognition, not something we stop to think about. They form the basis of our well-developed ability to get along in groups of others like us. We, like all social animals, have the skills to detect who cooperates and who cheats, who is kind and who is dangerous, who is dominant and who is submissive. Humans have these skills to a greater degree and have the ability to fine-tune them with greater precision than other animals.

Where chimps and bonobos can understand that individual A knows where some food is hidden and individual B doesn’t and consequently expect different behavior from the two,(22) humans can easily grasp much more complicated scenarios. We quite understand that when Hermia loves Lysander but has been commanded to wed Demetrius; and Demetrius wants Hermia; and Helena, Hermia’s friend, wants Demetrius; but a magic potion causes Lysander to fall in love with Helena rather than Hermia, then much hilarious confusion can ensue.(23) No ape could possibly keep up.