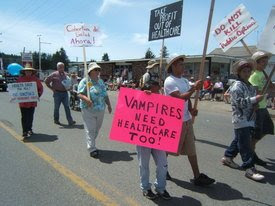 PORT ANGELES, WA. — Thousands of onlookers stood and applauded along the July 4 parade route in this paper-mill town as marchers walked by with banners demanding health-care reform and chanting “48 million uninsured. SHAME!” and “Health Care Now!”

There were the obligatory floats with the royalty of the Clallam County Fair and the Sequim Lavender Festival waving at the crowd. There were many gleaming fire engines and antique cars and tractors. An honor guard of the U.S. Coast Guard at the Ediz Hook Station led the way. Candidates for City Council were also out in force. The Victoria, B.C. Police Department came by ferry across the Strait of Juan de Fuca with their bagpipers who piped “Amazing Grace” as they marched in their tartan kilts.

But by far the biggest hit was two contingents marching for national health care, the League of Women Voters and Reform Health Care Now, a coalition that includes the Clallam County Democratic Party, the Green Party, Veterans for Peace, and other progressive organizations on the Olympic Peninsula.

Dottie Nicassio, a retiree from Sequim stole the show. She marched dressed in a hospital gown open at the rear with comically large plastic buttocks flashing in the bright sun. Her placard read, “Inadequate Coverage.” Walking arm-in-arm with her was Lou Templeton, leader of the League of Women Voters, modestly attired and wearing a placard, “I’m fully covered with singlepayer Medicare.”

A U.S. Army veteran dressed in combat fatigues, marched with her little boy behind the banner of Veterans for Peace. Her stroller was decorated with signs that said, “Health Care Not Warfare,” and “Support the Troops, Bring them Home.”

The march here echoed a message from the White House. In his Fourth of July broadcast, President Obama hailed patriots in the War of Independence who did not “wilt or cower” in the face of tyranny. He called on the people to end the nation’s “unsustainable health care system that is imposing crushing costs on families…. No more talk, no more delay. Health care reform must happen this year.”

Health Care for America Now initiated a petition, “Declare Your Independence from the Insurance Industry” demanding “real health care reform in 2009, with coverage I can afford, benefits that I can count on, a public health insurance option to give me choice, and equal access to quality care.”

Earlier, many of of the same crowd marched about 50 miles west in the “Old Time Fourth of July Parade” in Forks, WA, “Logging Capital of the World.”

And indeed, there were many logging trucks loaded with big logs bound for the Allen Logging Company saw mill just outside Forks. One truck was groaning under the weight of huge old-growth Douglas fir driven up from Springfield, Oregon to join the parade. Lance Slyter was driving a trucks that idled along highway 101 through Forks. Asked if the economic recession has affected production he told the World, “We’re down to one shift. We used to have two, so yes, it’s the slow-down.” Unemployment means millions are losing their employer-based health insurance.

Forks is trying to capitalize on the “Twilight” best-selling novels by Stephanie Meyers featuring a family of vampires that settles in the rain-soaked town in the west-end of Clallam County.

Four local teenagers stepped forward as the march was assembling to ask if they could carry signs in the parade. Willie Hatch, a member of the Quileute tribe, from Lapush, held up a sign that read, “Medicare Para Todos! (Medicare for All).” Nehemiah Tejano walked with a sign, “Stop Drug Company Ripoffs!”

But Alvaro Ortiz, a 6th grader, drew the most laughter and applause holding a hand-lettered red sign, “Vampires Need Healthcare Too!”

Retired teacher, Bill Kildall, coordinator of the Reform Health Care Now Coalition, was over the moon on the positive feedback from the crowd. “There are plenty of people in Clallam County, people right here in Forks, who have no health insurance,” he told the World as he marched. “We aren’t going to be marginalized by the insurance companies and the rightwingers. Health Care is a human right, not a privilege.”

This entry was posted in RagBlog and tagged Health Care Reform, Political Protest. Bookmark the permalink.