If There Were a God, We’d Be in Them Ourselves 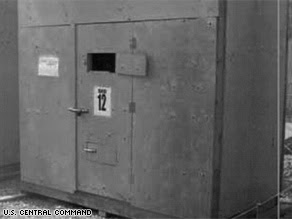 WASHINGTON — The U.S. military is segregating violent Iraqi prisoners in wooden crates that in some cases are not much bigger than the prisoners.

As a boy I was a great reader of the English adventure writer Percival Christopher Wren. He is remembered today only as the author of the book on which the movie Beau Geste was based, but he wrote many more books about the French Foreign Legion.

Life was hard in Wren’s Foreign Legion. Mess up and you spent the day with a rock-filled pack on your back, double-timing around the parade ground in the North African sun.

Really mess up and the sergeants put you in a stress position called the crapaudine, or locked you inside a box no bigger than a refrigerator where you would stay until you went mad.

I was terrified and yet fascinated. Could people be so cruel to one another? Did such evil really exist outside of books? Later I learned that it once had — in the chain gangs of our own South, where it was called the “hot box.” Imagine a citizenry so primitive, so low, so depraved, so ignorant, so devoid of humanity, as to permit such things!

The chain gangs were history by then, although fairly recent history. But before long, as fear of various Others made us not brave and strong but small and mean, the chain gangs came back. The cancer of prisons spread and metastasized. The land of the scared was becoming the home of a vast corporate gulag.

All the while we sat by and cheered, fat and ignorant and frightened, until now now we have at last what Jimmy Carter in his innocence once promised us — a government as good as the American people themselves.

Now we have our very own hot boxes in our very own colonies and most of us must be just fine with that. After all, none of this is the fault of Dick Cheney and George W. Bush, those nasty amoral morons who rule in our name. If our vote could be won by compassion, humility, the rule of law and a preference for peace, they would hide their disgust and try to deliver. No, the draft-dodging duo is the effect, not the cause.

The cause is those nasty amoral morons who put our two warhogs in the White House, and who then, after taking a good, long, four-year look at the results, chose to leave them there.

We built those boxes, and if there were a God in heaven we would be in them ourselves.

This entry was posted in RagBlog and tagged American Society, Electoral politics, Torture. Bookmark the permalink.

1 Response to If There Were a God, We’d Be in Them Ourselves