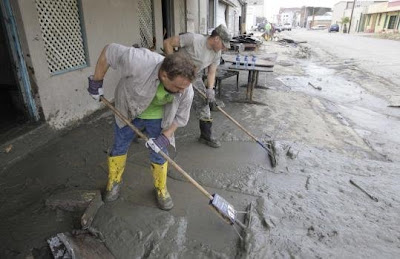 Clean up after Ike in Galveston. Now it’s the human toll that must be dealt with.
Galveston’s public housing residents ordered out with nowhere to go.

Residents of Galveston’s storm-devastated public housing projects have been ordered to clear their belongings out — but they’re still waiting for answers about where they’re supposed to go.

A reporter with the Galveston Daily News visited the city’s housing projects this week and found inhabitants — many of them elderly or disabled — at wits’ end. The paper reports:

Angry residents stopped every car that drove by the housing projects to search for answers.

“What are y’all doing?” she shouted. “I live here — you can at least give me some answers.”

She cornered a smartly dressed housing authority building supervisor and started peppering him with the same questions everyone was asking Wednesday morning: Where am I supposed to live? How long do I have to get my things out? Where is FEMA? Where is the housing authority? Are they going to tear this place down?

The housing authority’s employees had no answers for residents. One member of the battering crew said he wasn’t allowed to talk to the media but hoped the “real story” got out about what’s happening.

Many of the residents never signed a lease, he said, and there’s concern they might not quality for federal assistance. He also noted that in order to stay in a hotel paid for by FEMA, the agency requires a credit card — but many residents don’t have one.

The only option left for those with nowhere else to go is a public shelter, but spaces have been scarce. Galveston opened its first shelter Wednesday at a community center, but it offered room for only about 100 people and filled up fast, the Associated Press reports. The city set up a second shelter — tents at an old elementary school — yesterday.

Also yesterday, the Red Cross opened a shelter in Galveston offering 500 slots. But some public housing residents expressed a reluctance to stay in mass shelters because of uncomfortable conditions.

Galveston Mayor Lyda Ann Thomas testified before Congress this week about her city’s needs, but she did not discuss public housing in her prepared statement. Also this week, the U.S. Department of Housing and Urban Development and Federal Emergency Management Agency announced an 18-month housing assistance plan for families displaced by Ike, but it’s not slated to begin until November.

Thanks to Houston Indymedia / The Rag Blog