Illinois Man Makes It Through Day

Blume summons the strength to brush his teeth.
Adam Blume: An amazing story of survival.
April 11, 2008

Schaumburg, IL—Despite an overwhelming, seemingly endless barrage of frustrations, area systems analyst Adam Blume made it through the entire day Tuesday, overcoming the odds against him in a Herculean display of courage, perseverance, and the indomitable human spirit.

According to witnesses, though it seemed on more than one occasion throughout the day that his life would come to an end, Blume valiantly found the wherewithal to carry on. Not only did the 37-year-old successfully get out of bed and leave his apartment, but he somehow found the strength to navigate through the day’s many challenges and, once victorious, made his way back home again. Hit from every side with such formidable opponents as suburban conformity, mind-numbing coworkers, and the celebrity “infotainment” magazine he paged through on his lunch break, Blume nonetheless trudged along—permitting nothing, no matter how soul-deadening, to break his will.

“Man, what a day,” Blume said regarding his 16-hour battle with everything from public transportation to profound spiritual alienation.

Experts estimate that, by 10 p.m. Tuesday night, Blume had survived exposure to approximately 1,700 advertising images of epic banality, at least 35 emotionless interactions with complete strangers without making any real human contact, and more than 25,000 moments of soul-crushing inner emptiness throughout the almost day-long struggle. In addition, he also surmounted the onslaught of more than 150 separate anxiety-producing forces, including credit card debt, weight gain, hair loss, sexual inferiority, loneliness, a dead-end job, geographical isolation from extended family, virus-laden spam, the need to keep his cell phone charged, in-store Muzak, mortality, mounting laundry and dishes, his cable bill, indefinable longing, fear of terrorism, online gossip, the unavoidable certainty of his own unimportance, nostalgia for a past that never was, severe lower-back pain, and general ennui.

“I only wish I had gotten a chance to pick up those replacement filters for the vacuum cleaner,” Blume said only moments after valiantly suppressing the urge to set fire to his carefully cataloged file cabinet of insurance information and old appliance manuals. “The last ones I got were for the wrong model, but I can’t take them back because I didn’t save the receipt and now I need new ones.” 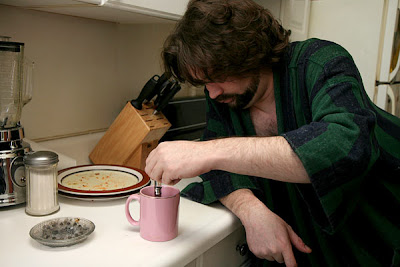 How Blume made it out of his kitchen—let alone his apartment and suffocating cubicle—may never be known.
“And for some reason, I had the song ‘Hobo Humpin’ Slobo Babe’ stuck in my head all day,” he added.

Blume’s epic odyssey of survival reportedly began at 6:15 a.m., the moment he awoke. After enduring the sudden, unrelenting attack of his bedside alarm clock, Blume resisted the near-overpowering compulsion to press the snooze button a second time. Courageously hurling himself from bed and dragging his almost unconscious body the 15 feet to his bathroom, Blume was almost defeated before even making it to work when, as he was putting toothpaste on his toothbrush, it fell on the floor.

“I thought I was going to lose it right there,” Blume later told reporters. “It was lying in that space between the sink and the bathtub, covered in dust, so I had to bend over, grab it, rinse it off under some hot water, and put some more toothpaste on it. I hate when that happens.”

According to roommate Joe Tesch, with whom Blume shares an apartment despite already having reached middle age, the physically, financially, and spiritually exhausted man then stared at his hollow face in the mirror for approximately three minutes before showering, shaving, and moving his bowels in time to catch the 7:04 bus.

After arriving at work, Blume’s trials and tribulations only continued. Over the next 10 hours, Blume weathered an onslaught against his very humanity, from automated menus on telephones and cash machines, to shrill homeless men yelling in the street, to a coffee stain on his workplace-mandated tie.

This was not Blume’s first exposure to adversity. When pressed, he was able to recall several such incidents, including the time in May 1993 when he walked on crutches all the way from the bus stop at the bottom of a large hill in Madison, WI to the unemployment office located at the top, the 72 hours he spent stranded in Chicago’s O’Hare Airport during the 2004 Christmas season, and the thousands of other battles before, between, and since.

“Another day, another dollar,” said Blume, modestly downplaying the impressive scope of his accomplishments. “I suppose I just did what anybody would have done.”

Source. The Onion / The Rag Blog

This entry was posted in RagBlog and tagged Existential Angst, Humor. Bookmark the permalink.