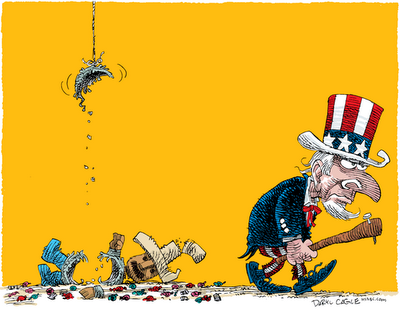 
Closing the border and deporting undocumented workers would actually hurt our economy. Over a 10 year period it would mean the loss of $2.6 trillion in GDP.

Now that the Democrats are nearly through passing a very disappointing health care bill (I won’t call it reform because it contains very little real reform), what is next on their agenda? Most people believe it will be immigration reform. I hope so, because our immigration laws need some real reform since the current laws are just not working for the benefit of anyone, except maybe the racist fearmongers.

In the hope that the Democratic majority might actually find some political courage, let’s examine what the best kind of reform would be. Actually, there are three options. Put all our efforts toward closing the borders and deporting undocumented workers, put in some kind of temporary worker program, or provide undocumented workers with a path toward citizenship and institute a more flexible immigration policy. Let’s see just what each of these options would do for the United States.

The Republicans and their racist teabagging base are definitely in camp #1. They want to close down the borders and deport undocumented workers and they don’t care what it costs. This is born of fear and racism. They see our southern border as an entry point for terrorists, even though there is absolutely no evidence that terrorists have ever used this crossing point.

There are several easier ways to get into the U.S., including the airports and seaports. These would simply require some paperwork (false or otherwise). Then there is the Canadian border. It is longer and much less guarded, and does not have a life-threatening desert to cross.

But there is not just the fear, but also a racist factor that motivates the “close the border” crowd. There are currently 11.9 million undocumented immigrants in this country. Of those, 56% are from Mexico, 22% from other Latin American countries, 13% are Asian and about 3% are Canadian or European. I’ll bet if the figures were switched and 78% were Canadian or European and 3% were Hispanic, there wouldn’t be a huge cry to close our borders.

The truth is that closing the border and deporting undocumented workers would actually hurt our economy. Over a 10 year period it would mean the loss of $2.6 trillion in Gross Domestic Product (GDP). It would seriously damage American business and cause untold pain to many immigrant families. In addition, it would cause the deaths of many immigrants trying to enter the country by forcing them into more dangerous crossing places and ways. Between 1994 and 2008, 5,607 people have died trying to enter the United States.

Recently the number of undocumented workers coming into the country has slowed, but it has nothing to do with increased border security (which has already been shown to not work). No, it is due to the drying up of jobs in the United States. But that’s a tough solution to undocumented immigration since it also hurts American citizens and businesses as well.

Setting up a temporary worker program would only be marginally better than the unworkable “close the border and deport” program. It would mean a gain to GDP of about $792 billion over a ten year period. However, it would not solve the problem of the 11.9 million undocumented workers currently in this country, so it would just be a band-aid solution.

By far the best solution is to provide a path to citizenship for those already here and institute a more flexible immigration policy. According to both the Center for American Progress and the American Immigration Council, this would mean a boost to GDP of at least $1.5 trillion over a 10 year period. And that boost would help all Americans, not just immigrants.

The undocumented workers would no longer be in an “underground” economy and would be covered by labor laws. Their wages would increase and drive up wages for everyone. It would also open up other avenues, such as education, so they could improve themselves, and by doing so, improve our country.

America has always been a country that thrived on immigration. Those willing to leave everything behind and go to a new country are not the timid and meek, but the brave and resourceful who are willing to work hard for an opportunity to succeed. Those are the kind of people needed to help America succeed. They should be accepted and encouraged to succeed and added to what is currently a shrinking tax base.

I expect the Democrats will probably not have the courage to take this path though. They will probably try to provide some kind of path to citizenship, but then screw it up by trying for bipartisanship by wasting a lot more money trying to close the borders. Then after they have a mess of a bill (like with health care), the Republicans will abandon them. After all, they are the party of NO.

Then the Democrats will try to convince us that the hybrid mess they’ve come up with is real immigration reform. It won’t be, any more than the current mess they’re pushing is real health care reform.

I would like to think they have the political courage to do immigration reform the right way, but I’ve been watching them for the last year. We’ll be lucky to wind up with a modest improvement.