Imprisonment Without Trial : The American Way? 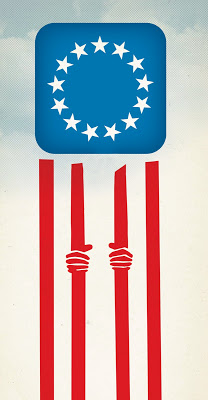 Image from the ACLU.
When we fail our own ideals:
The unconstitutional practice
Of indefinite detention

When our forefathers created this great nation, one of the ills they desperately wanted to correct was to insure that government could no longer put people in prison and keep them there for extended periods of time without a trial.

This was a tactic many governments had used to stifle free speech and punish people who they didn’t like. Because this is anathema in a free country, the writers of the Constitution included safeguards like habeas corpus to rein in those kind of governmental powers.

Sometimes in our history, we have not lived up to that ideal of justice. For instance, almost everyone now believes it was wrong for the U.S. government to imprison American citizens of Japanese descent during the Second World War. These people had committed no crime and posed no real danger to this country. Their incarceration was due to a racist and irrational fear.

We are now doing it again. We have been holding and torturing people (although I hope the torture has now been stopped) in Guantanamo Bay for many years without giving them a trial. This started under the administration of George Bush, when he decided he could imprison Muslims without reason or trial just by labeling them enemy combatants or terrorists, and keep them in prison for as long as he wanted.

To his shame, President Obama has continued this unconstitutional practice. He is now considering moving these prisoners out of Guantanamo Bay and into either another prison in Bagram in Afghanistan or a facility here in the United States. He is trying to do this to keep his promise to close the facility in Guantanamo Bay. Personally, I think this looks far more like a shell game than an effort to keep a promise.

What difference does it make whether these people are imprisoned in Guantanamo Bay, Afghanistan, or the United States? They are still being imprisoned with no charges and no trial, and are not allowed to present a defense or make a plea to be released. This is exactly the kind of thing our forefathers tried their best to prevent.

Now I know some will say these are prisoners of war and should be held until the war ends. The fact that not all of them were soldiers captured by our own troops belies this. Not to mention the fact that many have been released already. Others say they are terrorists and we will put ourselves in danger by releasing them. But a nation governed by the rule of law does not put people in prison because they may be scary people.

If scaring people was all it took to put people behind bars without a trial and deny them the right to defend themselves, then thousands of scary Americans should be behind bars right now. Frankly, Glenn Beck, Rush Limbaugh, Michele Bachmann, the KKK, the John Birch Society, the teabaggers, and anti-choice people who believe murder is a legal political act scare me far more than any so-called terrorist.

But I’ll just have to wait until these people, vile though they may be, actually break a law. Because that’s the way things are done in a country governed by the rule of law. We only arrest lawbreakers and then we give them a fair trial. And that’s exactly what should happen to those that have been imprisoned in Guantanamo Bay.

Every prisoner in Guantanamo Bay should be given a constitutionally-fair trial if there is evidence that they have broken a law. If there is no evidence (or the evidence was gained through torture), then they should be released. Justice should always outweigh politics, and no person should be kept in prison for purely political reasons.

It comes down to something as simple as doing the right and just thing.

1 Response to Imprisonment Without Trial : The American Way?