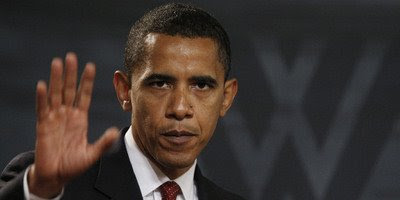 “I do solemnly pledge…” Photo by Charles Dharapak / AP.

As we celebrate the end of an eight-year disaster, we should recommit to the ongoing work required to create a truly just and sustainable world. With that work in mind, here’s my suggestion for a 2009 Citizen’s Oath of Office.

Eight long years ago at a counter-inaugural event in Austin, Texas, I administered a “Citizen’s Oath of Office” to the people who had come together on the steps of the state Capitol to challenge the legitimacy of the incoming Bush administration and its right-wing agenda. In 2005 I offered a revised version that expanded on our duties during even more trying times.

In 2009, we welcome a far saner administration but also face far deeper problems, and hence such a citizen’s oath is as necessary as ever. The Obama administration will no doubt step back from the reckless and reactionary policies of the past eight years, but the core problems of empire and economics — U.S. domination around the world and corporate domination at home and abroad — remain as threatening as ever. The robotic talk among Democrats of pressing on in “the right war” in Afghanistan (allegedly to fight terrorism) and a continued faith in the predatory capitalist system (albeit softened slightly in the face of potential collapse) offer little hope for meaningful change at the deep level so desperately needed.

As we celebrate the end of an eight-year disaster, we should recommit to the ongoing work required to create a truly just and sustainable world. With that work in mind, here’s my suggestion for a 2009 Citizen’s Oath of Office, with new language added in brackets:

“I do solemnly pledge that I will faithfully execute the office of citizen of the United States, and that I will, to the best of my ability, help create a truly democratic world by (1) going beyond mainstream corporate news media to seek out information about important political, economic, and social issues; (2) engaging fellow citizens, including those who disagree with me, in serious discussion and debate about those issues; (3) committing as much time, energy, and money as possible to help build [authentic] grassroots political organizations that can pressure politicians to put the interests of people over profit and power; and (4) connecting these efforts to global political and social movements fighting the U.S. empire abroad, where it does the most intense damage. I will continue to resist corporate control of the world, resist militarism, resist any roll-back of civil rights, and resist illegitimate authority in all its forms. [And I will commit to collective efforts in my local community to help build joyful alternatives to an unsustainable consumer society.]”

I think these bracketed additions are crucial. First, adding “authentic” as a modifier of “grassroots political organizations” reminds us that the campaign to elect Obama was not a movement, no matter how many times he uses that term. It was a campaign to elect a candidate from one of the country’s two major parties, both of which are committed to imperial domination and predatory capitalism. That isn’t to argue there is no difference between candidates, but to remind us that a slogan-driven electoral campaign for such a party is not a people’s movement. Authentic movements for justice do not arise out of the Republican or Democratic parties but from people coming together to challenge illegitimate authority rather than accommodate it. Strategic decisions about voting do not replace organizing.

Second, in addition to traditional movement building, it’s clearer than ever that we must focus some of our resources on strengthening on-the-ground alternatives to an extractive industrial economy that is undermining the ability of the ecosystem to sustain life. Those local experiments, such as worker-owned cooperatives and community-supported agriculture, will be increasingly important as the dominant culture proves itself unable to cope with economic and ecological collapse that is no longer a matter for speculation regarding the distant future but a reality we must face now.

We can’t predict the exact texture and timing of that collapse, but we can know it is coming and confront the need for real change. Imagine we are riding on a train hurtling 100 miles per hour on tracks that end at the edge of a cliff. The engineer is replaced by someone who wants to slow the train down to 50 miles per hour but is committed to staying on the same tracks. Slowing down may buy us some time, but the cliff remains.

So, like many others on Tuesday I will breathe a sigh of relief when Obama is sworn in, but I won’t breathe easy.

[Robert Jensen is a journalism professor at the University of Texas at Austin and board member of the Third Coast Activist Resource Center. His latest book, All My Bones Shake, will be published in 2009 by Soft Skull Press. Jensen can be reached at rjensen@uts.cc.utexas.edu and his articles can be found online here.]

This entry was posted in Rag Bloggers and tagged Democracy, Obama Inauguration. Bookmark the permalink.