International Day of Peace : A ‘Day of Global Ceasefire’ 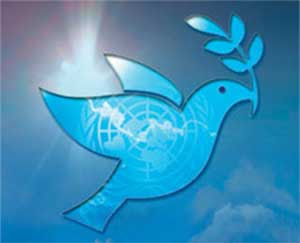 September 21 is International Day of Peace, a day established by the General Assembly of the United Nations for “commemorating and strengthening the ideals of peace within and among all nations and people.” UN Secretary-General Ban Ki-moon also has urged all combatants to honor the day by standing down from battle. “I call for a day of global ceasefire: A 24-hour respite from the fear and insecurity that plague so many places,” he stated on this date last year. “I urge all countries and all combatants to honor a cessation of hostilities. I urge them to ponder the high price that we all pay because of conflict. I urge them to vigorously pursue ways to make this temporary ceasefire permanent.”

What is peace? Is it a temporary condition between periods of conflict? A worthy but unattainable ideal? Just a hope, or a dream?

Peace is not as elusive as that. It’s got a past, present and future. Peace is not so much a goal as a process. As the great nonviolent organizer, AJ Muste famously said, “There is no way to peace. Peace is the way.”

Peace is not the absence of conflict; it’s a way through it. Because we humans are always going to be in conflict in some form or another, making peace means actively addressing conflict and injustice – not running away from it — using nonviolent methods. The choice is always available.

Some forms of peacemaking are so common that most people do it just like breathing. It’s the smile of affirmation, the word of encouragement, the humor that eases tension, the candid statement that clears the air. It’s the community garden, the guitar lesson, the basketball game. We make peace a hundred times a day because it’s the natural thing to do.

Peacemaking is also a discipline. We may make conscious decisions to refrain from gossip or name-calling, learn how to apologize, let go of a grudge, and firmly and respectfully stand up to bullying. Nonviolence, at its best, involves confronting an adversary while simultaneously preserving the adversary’s dignity.

People using principled nonviolence catch courage from one another. Like the father who forgives the man who murdered his daughter and then visits him in prison, the unarmed peace team that intercedes between armed militias, the former gang member who talks kids out of retaliatory violence, the soldier who refuses to return to war.

Peacemaking is done spontaneously or may be strategically planned – and is often both. Actions may be immediate responses to overt violence or symbolic acts that address root causes of injustice. Methods may include civil disobedience, nonviolent resistance and creative intervention. Like the elderly woman who is first to crawl under the barricade, the young people who sit in the road to halt business as usual, the cellist who plays Bach in the middle of a besieged town square, the student who faces down the rolling tanks.

The more we know about nonviolence, the more likely we are to use it. If media reports about people who commit violence dominate the news at the same time that nonviolent actions are ignored or minimized, what message does this convey, especially to young people who want to be heard?

I’m not convinced that violence sells the news, but I do think that the news sells violence, and it doesn’t have to.

I’d like to see what would happen if, even just for one day, like a Global Day of Ceasefire, all major media outlets around the world directed their journalists, photographers and videographers to document the ways people are choosing active nonviolence in the face of conflict, terror and injustice. Inspiration is contagious. A temporary ceasefire could become permanent.

[Rag Blog contributor Susan Van Haitsma posts as makingpeace on Statesman.com. This opinion piece also appears on the Sept. 21 op ed page of the Austin American-Statesman and on Common Dreams.org]