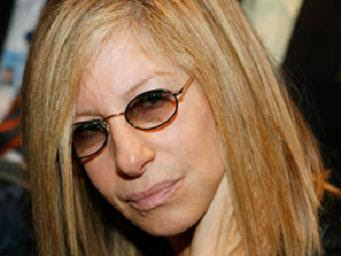 ‘There is too much at stake right now to elect another George W. Bush to the White House’
By: Jeffrey Ressner / July 28, 2008

“She sometimes answers questions by e-mail,” said one of Barbra Streisand’s trusted confidants, when asked if the star would consent to an interview with Politico. Streisand, who occasionally posts political statements on her own website, rarely does print Q&As and gave her last TV interview back in 2005 with Ellen DeGeneres.

So a month ago a dozen e-mail questions were sent off, nearly all regarding the presidential race. Late last week, we received her answers on shifting her support from Hillary Clinton to Barack Obama (“immediate”), racism (“naïve to think [it] won’t be a factor”), how things might play out this year (“close”), and much more.

Here are our questions and her answers in full, minus one exchange that substantially overlapped with another.

We had a very deep bench of Democratic Presidential candidates in the primary, and we were very lucky to finally have two capable, dynamic and intelligent candidates vying to be the nominee. Supporting Sen. Obama for President was an immediate decision for me after Sen. Clinton ended her bid for the Democratic nomination. Throughout this process, they challenged each other to be better. It was a historical race, with Hillary breaking through that glass ceiling for all women and Barack inspiring young kids that they can overcome their circumstances to reach greatness.

Will you be doing any concerts to support Obama and the Democrats before the election?

I would absolutely consider performing for Sen. Obama and for the Democratic Party.

What do you say to Hillary’s fans that might be moving to vote for McCain — a figure that’s been estimated to be as high as 15 percent of her supporters?

I would urge those voters to take a step back and realize that our country is at an extremely serious crossroad . . . . There is too much at stake right now to elect another George W. Bush to the White House. And John McCain is just that. He has stated that the issue of economics is not something he’s understood as well as he should. He does not support reproductive rights for women, increased veteran’s benefits and ending the war in Iraq. There is just no reason for Sen. Clinton’s supporters not to back Sen. Obama.

Have you spoken with Obama? If so, what did you talk about?

I have met and spoken to Sen. Obama, but I don’t discuss my personal conversations with the media.

Which Clinton policies do you think Obama should embrace, and what role would you like to see her have in his administration should he be elected?

I would like to see him embrace her universal healthcare policy. But it is ultimately up to the two of them to decide whether she will be more effective as a leader in the Senate or if she should work in the Administration. She has years of experience in public service and her work serving the needs of children and poor and working class Americans is incredibly admirable.

A lot of folks object to “Hollywood celebrities” participating in political discourse. Aside from pure disagreement over certain issues, why do you think there’s such a backlash when you or other well-known performers speak your mind?

On a very basic level, many people think celebrities have too much already so we shouldn’t be entitled to our political opinions. Also, the other side objects to the fact that we might be listened to. But, I see myself first and foremost as a citizen of this country. And I am outspoken about the issues I care about like healthcare, global warming, the war in Iraq, energy independence, education, poverty and so on.

I think we are all lucky to live in a country where people have the constitutional right to voice their opinion and speak their mind without punishment or penalty. Everyone should exercise that right, because it engages people in the political process and forces our candidates to be clear about their stances on important issues affecting all Americans.

Do you have any friends or family members who are conservative and/or Republican?

I do have friends that are Republicans and we have very spirited conversations on a whole range of issues. I am often baffled by why they are Republicans, but I enjoy the dialogue and can move beyond politics to find common ground in my personal relationships.

As we head toward November, I think the race will continue to be close — although I hope I am wrong. But this country likes tight races and I am afraid it will ultimately come down to which campaign turns out the most voters on Election Day.

I want to believe that our country can see beyond race as a factor in voting for a Presidential candidate…that instead, a candidate’s intellect, vision, political values and policies override any consideration of his skin color. But on some level, it would be naive to think that race will not be a factor. I do believe, however, that there is much less racism, sexism and homophobia among the younger generation and that we have come a very long way.

There’s been a lot of discussion about Israel during this race so far. Should this issue have a major place in this year’s election?

Issues of foreign policy have a place in every election for President. As a woman, a Jew, and a strong supporter of Israel, I am confident Sen. Obama is committed to Israel’s safety and security.

Aside from the presidential contest, are there any other races around the country that you’re following?

Yes, Yes, Yes! I am closely following the Senate races. We need to reach a 60-seat majority in the Senate. There are 35 Senate races, of which 5 are open challenges. Democratic strategists believe with varying degrees of probability that the following states are at least a possibility for turnover: Alaska, Colorado, Kentucky, Maine, Minnesota, Mississippi, Nebraska, New Hampshire, New Mexico, North Carolina, Oklahoma, Oregon and Virginia.

If the Democrats win the Presidency, we will need a strong mandate in the Senate to break the gridlock of filibustering that the Republicans have used over the past four years. For that to happen, Democrats need to capitalize on picking up key seats in states where Republican support is waning. I can’t imagine a Supreme Court with another judicial appointment like Scalia, Thomas, or Alito.