“The corporate rules are simple: tell the news the way you’re told to tell the news or ratings will decline and you’ll be out of a job.” — Doug Hecker, Co-Producer, Co-Director, Co-Writer, ‘Project Censored: The Movie’

Six years ago, they met in the town of Sonoma, California, and ever since then — with time off for good behavior — they’ve worked on a documentary about the media watchdog group, Project Censored, founded by Carl Jensen in the wake of Watergate.

Hecker and Oscar are both college grads and they’re both the kinds of grads that teachers will practically die for — which means they’re committed to critical thinking, life-long learning, and social responsibility.

When they graduated from college — Oscar from C.W. Post University on Long Island, New York, Hecker from Sonoma State University in California — their studies just began.

Their new 60-minute documentary, Project Censored: The Movie, Ending the Reign of Junk Food News, informs, entertains, and riles up citizen activists, too, about the loss of civil liberties in the United States today and the rise of what they regard as a police state.

“Human consciousness,” Zinn says “is hard to fathom, but every so often it breaks to the surface.” Hecker and Oscar know that the media puts humanity to sleep all day and all night, and that the media can also wake humanity from its slumber.

Mickey Huff, the current director of Project Censored, points out that there’s more information available these days thanks to the Internet, but that, paradoxically, there’s also greater misinformation. Movie producer, director, and cinematographer Haskell Wexler suggests that in our peculiar form of democracy, Americans may not want to known the truth. Hecker and Oscar hope that’s not true.

Their rousing picture about Project Censored and the state of the media in America today is also a wake-up call to viewers sickened by the steady diet of junk food news dished out by corporate media.

The interview with both Hecker and Oscar took place two days after I saw their movie. 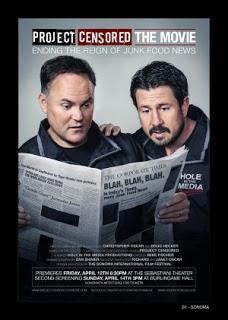 Jonah Raskin: Can you say something about an exact moment when the proverbial light went on in your head?

Doug Hecker: The light went on for me when I was enrolled in communications classes. As a student in Project Censored, we constantly discussed the spin that corporate media uses when reporting the news.

Christopher Oscar: For me, it was when I was an investigative journalism major and writing a story about the fact that crime was down 30%, but crime coverage increased 70%.

In your own life have you noticed a strong urge to censor?

Hecker: I choose my words wisely, but I tend not to censor myself. I could lose some business as a realtor because of the movie. If a client chooses not to work with me because I believe the press should be free and should present news that lead to social change, I’d rather not work with that person.

As a father with children, what kinds of limits if any do you set for them about TV and the Internet?

Hecker: I prefer to discuss topics on TV and the Internet and to help create awareness and media literacy in my children. However, I do limit violence, foul language, and sexual content.

Oscar: It’s very rare that we find a program that is suitable for my children to watch. My kids don’t use the Internet. They are eight and five years old. If and when we find a child-friendly program, we limit viewing.

Hecker: Censorship leads to war. War doesn’t benefit anyone except those in power. It’s corrupt and it’s brought about by power, money, greed, religion, politics, ignorance, and stupidity.

Doug, you grew up in a small California town. Did you buy into the official story disseminated by the media?

Hecker: I did for years. I began reading newspapers in high school and believed what I read. However, once I got to college I realized that a majority of U.S. news is designed to control the population, shape public policy, and instill fear into citizens.

Oscar, what about you?

Oscar: What I witnessed was that my parents watched tons of fear. I could never understand why they were so hypnotized by it. As I grew older, I found that I enjoyed investigative news shows like 60 Minutes. It wasn’t until college that I became a critic of corporate media.

Looking at the global picture, would you say censorship is better or worse in the U.S. than in say, China, Russia, or Iran?

Hecker: I would say it’s not better or worse, but different. U.S. censorship is subtle — not the dictatorship-style where the consequences are prison or death. However, the attack on journalists and the First Amendment is increasing in the U.S. Under the guise of protecting us against terrorism, we’re losing civil liberties.

Oscar: The majority of people don’t even know censorship is there. Next thing you know, America will be back in another illegal war.

Hecker: The corporate rules are simple: tell the news the way you’re told to tell the news or ratings will decline and you’ll be out of a job.

Oscar: Reporters should investigate the owners of their own stations.

Where you live in California, what local stories and truths do you think are hidden from citizens now?

Fear is a big factor in our society isn’t it? Reporters are afraid and citizens are afraid. How do we overcome fear?

Hecker: Fear-based news leads to higher ratings, which leads to increased ad revenue. To change fear-based news you need to start at the grassroots with programs like Project Censored and other alternative media sources that have validated news and fact-based reporting.

Oscar: People glued to the nightly news are bombarded and besieged with violence and destruction. The message you get is that people are out to get you so you better watch out. We need a media system that shines light on the good that people are doing in the world to create a more harmonious planet.

There still are people who are courageous, such as the Australian, Julian Assange, founder of Wikileaks, who released on the Internet confidential U.S. documents. Did he go too far?

Oscar: Hopefully, governments will think twice about their actions now that there is a Julian Assange out there. It’s surprising, though, how little attention it’s really gotten. You would think more people would be upset about the failure of the news to dig for truth.

What gives you hope for a world in which your kids are grown up?

Hecker: Without hope no future is possible. We made this film to help future generations and to point out that social change is needed and that the people of the world need to put an end to complacency and become active and involved citizens both politically and socially in order to end the human and environmental atrocities that plague our world.